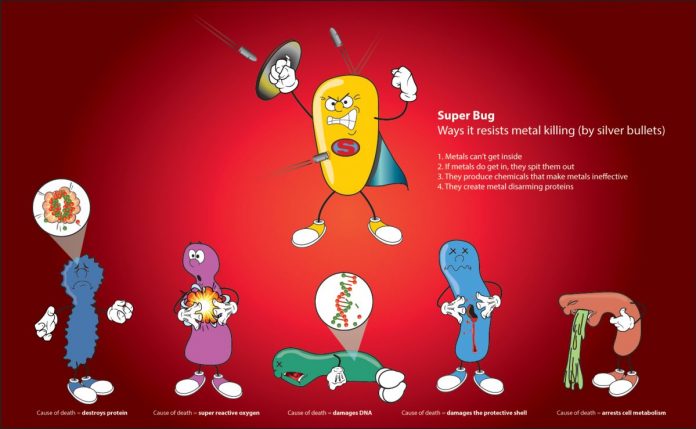 The prophylactic use of antibiotics in the agricultural industry is considered one of the key contributors to the widespread emergence of antimicrobial resistance (AMR). A number of mitigation strategies have been proposed to address this problem, including discontinuing the administration of preventative antibiotics in livestock, enhancing the monitoring process for emergence of antimicrobial resistant organisms, and controlling the practice of antibiotic misuse by offering alternative antimicrobial strategies. To that end, our research group at the University of Calgary is examining the capacity of an array of metal formulations – with proven antimicrobial activity – as alternative options to conventional antibiotics and antiseptics.

A surge of societal awareness regarding practices in food production has generated a call for ‘organic’, antibiotic, and hormone-free foods. Unfortunately, this social movement falls short in addressing the issue of antibiotic resistance as the practices inflate the cost of food production; encouraging the perpetuation of the aforementioned agricultural practices in poorer nations. Consequently, the need for alternative strategies to combat infectious disease is ever present.

Prior to the 21st century, studies into the mechanisms of bacterial resistance to metal ions and so-called ‘heavy metals’, was the realm of a few dozen scientists globally. In fact, less than 50 manuscripts per year were published on this subject despite the use of metals as antimicrobials for thousands of years. Upon recognition of multidrug resistance in clinically significant bacterial strains, the scientific community saw a surge in the number of publications in the field of metal-based antimicrobials. Their use is now pervasive, and has continued to increase since 2010.

For decades researchers have explored bacteria’s ability to resist toxic metals and, as a result, a number of genes responsible for conferring metal resistance have been revealed. While no single mechanism is solely responsible for bacterial metal resistance, several simplified mechanisms can be distilled from the body of knowledge that has been generated from monitoring how bacterial physiology changes in the presence of toxic metals. The mechanisms of metal toxicity are even less understood compared to those of metal resistance in bacteria and other microorganisms. Nonetheless, several pathways have been extrapolated from recognised mechanisms of metal toxicity.

New, re-emerging, and recurring community-acquired and nosocomial pathogens that are antibiotic resistant are now universal. Antibiotic development pipelines are dry. Hence, the enhanced appeal of using metals as antimicrobials. We, and others, have shown that metals demonstrate the capacity to be very effective at killing microorganisms at low concentrations. The use of these compounds has progressed past clinical trials and into consumer products. They can now be found in wound dressings and other medical devices, as well as liquid formulations for hand washing, and impregnated into textiles. It’s noteworthy to mention – and perhaps not entirely surprising – that silver resistant bacteria have already emerged in the clinic.

In the agricultural industry, metals are used as antifungal seed dressings, pesticides, wood preservatives, and as animal feed additives. In fact, several countries have begun to substitute the use of traditional antibiotics with metal compounds, such as copper and silver. On the surface, this strategy has the appearance of being efficacious. Yet, their unchecked use considerably increases metal deposition in soils and water bodies, notably modifying microbial communities and the surrounding ecosystem. Recent research has noted that studies of soil microbes exposed to metals became ‘primed’ for increased transmission for antibiotic resistance determinants, even though they have not been previously exposed to antibiotics. Additionally, our research group has demonstrated that metal efficacy against bacteria is difficult to predict, as a result, blanket treatments are dangerous and should be avoided or applied with caution. To that end, we cannot help but ask ourselves if we are taking two steps backwards after our perceived step forward. With this in mind, we need to be aware that replacing conventional antibiotics with antimicrobial metals may encourage a more intricate problem if their use is loosely controlled.

What is evident is that determining the direct and subsequent downstream effects of metal exposure is not a trivial task. For over a decade, our Microbial Biochemistry Laboratory at the University of Calgary has concentrated on understanding these challenging questions. We have broadened our metal research to a number of pathogenic microorganisms, and intend to further expand this work. After each experiment, we are ever closer to uncovering the precise details of how each type of metal exerts its antimicrobial effects. Still, a considerable amount of work is required, limited only by lack of interest in funding such research.

Strategies to curb antimicrobial resistance include: Stewardship over the use of antibiotics; reduction in the use of all antimicrobial agents – in human and veterinary medicine, household and institutional settings, agriculture and industry; and increasing public awareness about steps to take to thwart antibiotic resistance.

Lastly, it is necessary to recognise that the status of antimicrobial resistance is an intricate problem and requires influence and insight from politicians, physicians, veterinarians, and industrial stakeholders. Before the use of novel antimicrobials (such as metal-based compounds) is approved, it is imperative that we equip ourselves with solid scientific evidence that informs on the mechanisms of both toxicity and resistance in microorganisms. In this manner, we can establish a framework for their responsible use and potentially extend their utility as antimicrobial agents – an opportunity we squandered with conventional antibiotics.