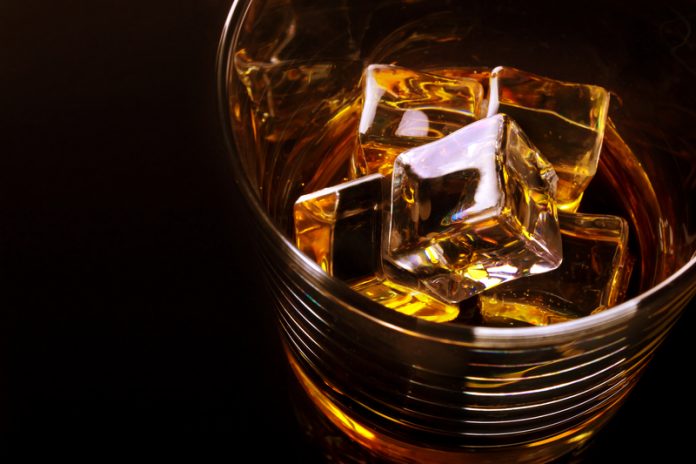 Professor Samuel W French, at Harbor-UCLA Medical Center, calls for collaborators on efforts to prevent alcoholic liver disease with the use of betaine

The purpose of my current study is to investigate alcoholic hepatitis pathogenesis by utilising liver biopsies derived from a clinical trial consortium. The major goal is to determine how to prevent alcoholic liver disease, since only liver transplantation can reliably treat this disorder.

In 2010 it was estimated that alcohol related cirrhosis accounted for 47.9% of all cirrhosis deaths and 46.9% of all cirrhosis disability.  This disease burden costs about €125bn annually in Europe and represents 1.3% of GDP. Alcoholic hepatitis occurs in 35-40% of alcohol abusers with high mortality rates (40-50%) among untreated patients with severe disease. Alcoholic cirrhosis is the second most common indication for liver transplantation.

Clearly the time has come to provide a method to prevent alcoholic liver disease (ALD), rather than waiting for ALD to develop. In animal studies, we have shown experimentally that feeding betaine with alcohol can prevent ALD. Betaine is a small molecule normally present in the human body. It is a colourless, tasteless, soluble, cheap, odourless, and non-toxic chemical, which normally functions in the body to provide methyl groups to assist enzyme reactions.

Betaine has been used to treat non-alcoholic fatty liver (NASH) in clinical trials in humans (20mg/day) without any liver toxicity or negative consequences. Betaine is a very potent antioxidant, blocking the liver toxicity mechanism caused by high blood alcohol levels (~500mg) that occur while binge drinking. In an experimental rat model where blood alcohol levels reached 500mg, a 7-10 day cycle (equivalent of binge drinking) lead to progressive liver injury. However, when betaine was added to the alcohol liquid diet (2g/kg body weight), the cyclic elevation of the blood alcohol levels remained low (between 100-200 mg) and no liver injury occurred.

The mechanism by which betaine keeps the blood levels of alcohol low is complicated but it can be explained as follows:

1) During alcohol ingestion an enzyme called alcoholic dehydrogenase oxidises alcohol to form acetyl aldehyde (Fig). The rate of alcohol oxidation depends on the available levels of NAD+, because NAD+ is required for alcohol dehydrogenase to oxidize the blood alcohol and to eliminate it from the blood. Binge drinking overwhelms this mechanism and depletes the NAD+ levels and the blood levels go sky high which injures the liver. 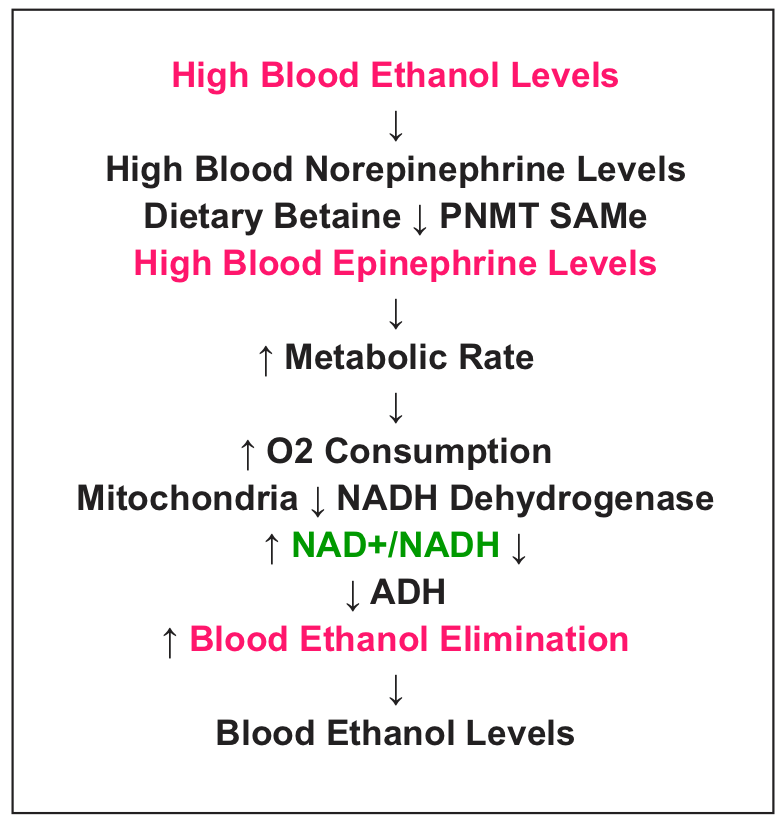 Fig. This is a scheme showing the mechanism by which betaine or SAMe fed with ethanol causes an increase in the blood ethanol elimination rate and a decrease in blood alcohol levels through NAD+ generated by an increase in the metabolic rate caused by epinephrine conversion from norepinephrine. Published with the permission of Springer.

2) Adding betaine to the diet replenishes the NAD+ levels by a complicated mechanism. In binge drinking the catecholamine from the adrenals are released into the blood due to stress. Both norepinephrine and epinephrine become elevated in the blood. Betaine provides methyl groups for an enzyme that is required to convert norepinephrine to epinephrine. The enzyme is called phenylethanolamine N-methyl transferase. When it converts norepinephrine to epinephrine this causes an increase in the body’s metabolic rate. Epinephrine is 5 to 10 times more potent to increase the metabolic rate than is norepinephrine. The increase in the metabolic rate generates NAD+ from the mitochondria. The 100 NAD+ increases the rate of elimination of alcohol from the blood by increasing the activity of alcoholic dehydrogenase. Then the blood alcohol falls to non-toxic levels to 100-200mg. In fact, betaine added to alcoholic beverages will keep the blood alcohol level at 100-200mg, despite binge drinking behaviour. This is how to prevent ALD.

This is a request for collaborators to assist in the prevention of ALD by adding 20g of betaine to alcoholic beverages or by the drinker prior to drinking the alcohol. Beer or wine would be ideal drinks to add betaine to, due to their large volume and common consumption. The drinker should be motivated to buy or prepare the alcoholic/betaine drink because of the many obvious benefits, such as not damaging their liver or not having an accident on the highway and killing many people.

Please help me achieve this life saving process where dangerous blood alcohol levels are prevented by betaine added to the beverage.