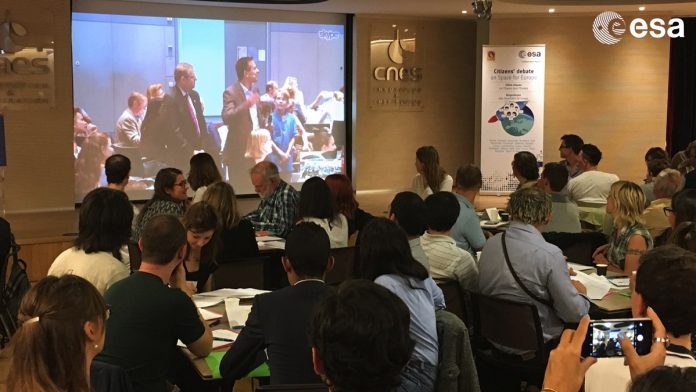 The European Space Agency (ESA) started to commit to Sustainable Development and Corporate Social Responsibility (CSR) over 10 years ago, with dialogue with stakeholders at the heart of the holistic approach supported by the Agency. The main aim is for ESA to be more coherent in terms of its DNA and missions (delivering applications and services for the benefit of society and for planetary security and health), in its decision-making process, and in its everyday operations, in accordance with CSR values.

In the space sector, we are very well acquainted with the challenge as, by definition, we undertake missions that are sometimes the first of their kind or that could be described as ‘risky business’ – which really is rocket science! We deliver access to space through the launching of space objects (such as rockets, space stations and satellites) to provide citizens and the planet with applications and services on a daily basis. We even recently landed on a comet with the Rosetta/Philae mission. So, professional challenges are in our DNA.

The Citizens’ Debate on Space for Europe

Another recent challenge was for ESA to organise the very first Citizens’ Debate on Space for Europe. It was the first informed debate between a space agency and its main stakeholders, that is, taxpayers, citizens. This debate arose out of the determination of ESA’s newly elected Director General, Jan Woerner, to open up our agency and, more broadly, space to the general public.

The debate was designed and organised using as a model the 2015 citizens’ debate on a planetary scale held in preparation for COP21 (the Paris Conference on Climate Change), which brought together 10,000 citizens in 76 countries on one day (6 June) to discuss and answer 30 questions on climate and energy. The results were conveyed to the negotiators.

ESA’s debate was conceived to obtain information from citizens and inspiration for drawing up the future of Europe’s space strategy. In terms of governance, this debate – although an illustration of participatory democracy – was not intended to interfere with ESA’s institutional decision-making process, but to nurture and support it. The SME ‘Missions Publiques’ which co-organised the COP21 debate supported ESA throughout the process.

The debate was also a way to lend an ear to stakeholders as a matter of responsibility, accountability and respect towards them, and to collect their views, ideas, concerns and even dreams about space issues. More than 1,600 citizens dedicated a whole day (10 September 2016) to gather together and discuss space issues after having been given information through magazines and videos. These participants subsequently answered a questionnaire containing both closed and opened questions. They also experienced and appreciated a creative session, giving them the opportunity to help build up a space mission for 2036.

With this conversation, we realised in particular that citizens thought they had no access to space, thinking it was a matter for specialists, experts and policymakers. However, they actually did have access to space without even realising. For any citizen, there are a large number of benefits that make for a more sustainable society. Space programmes with their satellite applications and services also help and support UN Sustainable Development goals and address the more acute societal challenges of the 21st century. Space programmes and applications contribute to:

During the citizens’ debate, the inspirational dimension of space was tangible and the young participants were very enthusiastic and involved in the discussions. Space indeed represents opportunities in many sectors, as well as hope for the future, and this was demonstrated by the debate. With this citizens’ debate, ESA opened up a new chapter of the space adventure.

See materials and results on: www.citizensdebate.space

Head of the Coordination Office on Sustainable Development

Head of Citizens Debate on Space for Europe