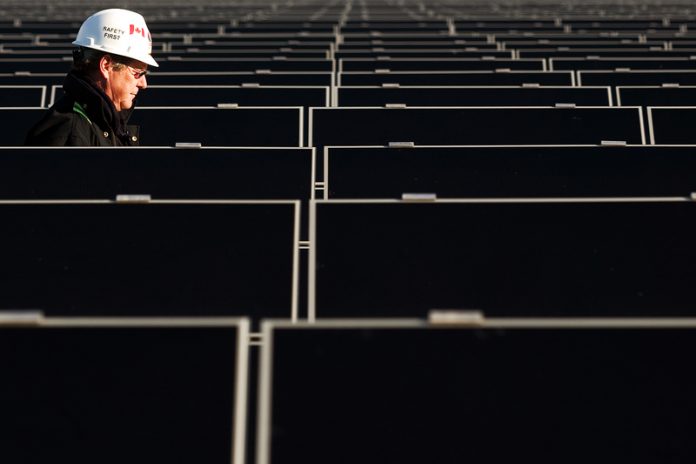 When most people think of Canada’s energy resources, they are likely to think about our vast stores of oil and gas. What they might not realise is that Canada is increasingly focused on developing our renewable energy resources as well. As the world undergoes a historic transition to cleaner forms of energy, countries are positioning themselves to capitalise in a clean growth century.

They’re realising that climate action is now a competitive advantage. The environment and the economy are now two complementary elements of a single engine of innovation.

Canada’s strategy is to leverage the fossil fuel resources we have today to deliver clean-energy solutions for tomorrow. This means making significant new investments in clean energy technology, accelerating its adoption at home and exporting it abroad.

We already have one of the cleanest electricity mixes in the world. Approximately 80% of our electricity comes from non-greenhouse gas emitting sources, primarily hydro (59%) but also nuclear, solar, wind energy, and biomass.

A first for solar heating

Recently, we announced plans to accelerate the phase out of coal-fired power from our electricity mix, which will significantly improve the air quality and the health of Canadians. This initiative will move Canada closer to 90% from non-emitting sources by 2030.

Canadians have already seen exciting developments in clean energy. Last winter, for instance, a community just south of Calgary – the Drake Landing Solar Community – became the first community in the world to meet its heating requirements entirely through solar energy.

Our government is working to accelerate the transition to renewable energy by investing in the research and development of innovative clean energy technologies, energy efficiency programs, alternative transportation infrastructure, and electricity infrastructure interties that promote electricity cooperation across our vast nation.

Our investments will support the development of clean technologies to increase the supply of renewable energy from sources such as solar and wind energy, as well as that of new and emerging sources, including wave, in-stream tidal, geothermal and biomass. Further, the use of smart grid technologies and grid connections will provide off-grid communities, such as those in the north, with cleaner energy.

Based on existing federal, provincial and territorial policies and initiatives, the International Energy Agency estimates that Canada’s renewable capacity is expected to grow by around 13 GW over 2015-2021, led by wind energy (7 GW) and solar (2.7 GW). An additional 2.4 GW of hydroelectric capacity could also come on line by 2021.

We are proud of the progress we’ve made, but there’s still much more to do. Climate change is among the great challenges of our time, and we must make investments that reflect this reality. That’s why we’re investing an unprecedented $180 billion in infrastructure.

This includes green infrastructure investments of $5 billion announced in the Budget 2016 and a commitment to provide an additional $21.9 billion over the next decade. These investments will help support greenhouse gas emission reductions; enable climate change adaptation and resilience; and, help communities have clean air and safe water.

We’re investing in new low-carbon and renewable power projects; expanding smart grids to make more efficient use of existing power supplies; and, deploying infrastructure for alternative transportation fuels, including re-charging/re-fuelling stations for electric and alternative fuelled vehicles. In order to meet our emissions reduction target and grow the economy, we have also adopted the Pan-Canadian Framework for Clean Growth and Climate Change – a plan which includes a pan-Canadian approach to pricing carbon pollution, and measures to achieve reductions across all sectors of the economy.

While the transition to a lower-carbon economy may be long, its trajectory is clear. Canada is determined to seize the opportunities presented by the new clean energy economy by acting decisively and investing wisely, and creating jobs and opportunities for generations to come.