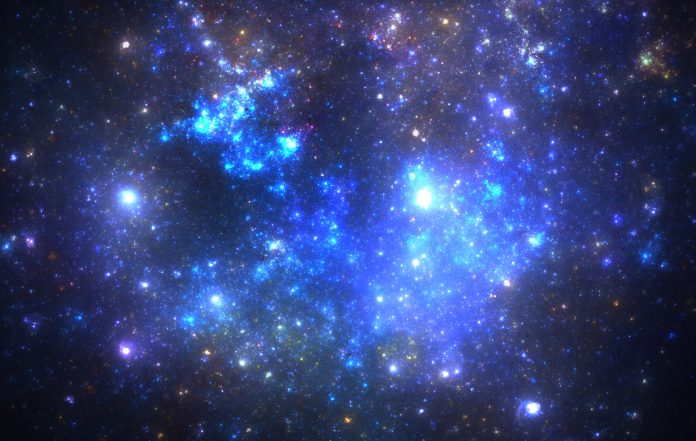 At the end of June 2017, the Italian Space Agency formally reviewed the COSMOS project 6 months after the kick-off meeting. Although the project is still in its beginning phase, the main lines of development were clearly defined. The organisation of the project nation-wide requires careful management activity. A series of meetings open to all the Italian Cosmic Microwave Background (CMB) community were organised to present and to discuss the activities foreseen in the various project nodes.

The COSMOS project has 11 nodes: Università di Roma ‘Tor Vergata’ (coordinating node), Università di Milano, Università di Milano-Bicocca, Scuola Internazionale di Studi Superiori Avanzati (SISSA), Università di Padova, Università di Ferrara, Università di Genova, Università di Roma ‘Sapienza’, Istituto Nazionale di Fisica Nucleare (INFN-Pisa), Istituto Nazionale di Astrofisica (INAF-Trieste and INAF-Bologna). Each node has the responsibility of coordinating its activity at the national level, as well as monitoring the implementation and delivery of the products. A common effort was devoted to incentivise the interactions and the collaborations among people belonging to different institutions. The first meeting of this series was held in Bologna the 20th of January 2017. A final meeting devoted to presenting the main findings of each of the nodes after 6 months of activity was organised in Bologna the 26th of May 2017. In parallel to all these activities, a lot of discussion have been dedicated to defining an Italian roadmap for the next decade of CMB experiments. The idea is to arrive at a final document as soon as it will be clearer how to position the Italian CMB community in the international scenario and, in any case, by the end of the project in December 2019.

The strong and effective coordination at the Italian level provided by the ASI/COSMOS project has made it easier to interface with other internationally coordinated activities concerning CMB experiments. In fact, a lot of effort has been dedicated to the realisation of ground-based and balloon-borne experiments, as well as to the proposal of the ESA/CORE space mission. At the European level, there is the attempt to coordinate a joint effort for the realisation of a ground-based CMB research infrastructure. A proposal has been submitted to the EU in the framework of Horizon 2020 under the ‘Excellent Science’ pillar for the program part relative to ‘European Research Infrastructures’. While still waiting for the referee report, a meeting ‘Towards the European Coordination of the CMB programme’ will be held in Villa Finaly in Florence next September. It is worth mentioning that the CMB polarisation observations from the ground have been implemented by several research groups, with a clear tendency to concentrate the activities in few high-quality sites, with excellent atmosphere and already existing infrastructures. Running and planning experiments from the Atacama Desert in Chile, from the South Pole, and from other sites are presented in table 1, 2 and 3, respectively.

All these efforts from the ground, together with those from stratospheric balloons and satellites, aim to detect the so-called B-modes in the polarisation of the CMB photons. Inflation is a theory of the very first instants of the Universe, and as such it took place at very high energies, much higher than what can be presently tested in ground-based laboratories. This makes inflation a privileged window into very high-energy physics and offers the possibility of testing various aspects of fundamental physics. Inflation makes a crucial prediction, namely the generation of a stochastic background of primordial gravitational waves. This background imprints a unique CMB polarisation pattern, the B-modes, whose detection is considered a smoking gun of the inflationary paradigm. Although still now very elusive, the B-modes therefore constitute the frontier of research in cosmology to better understand the very early universe and very high-energy physics. 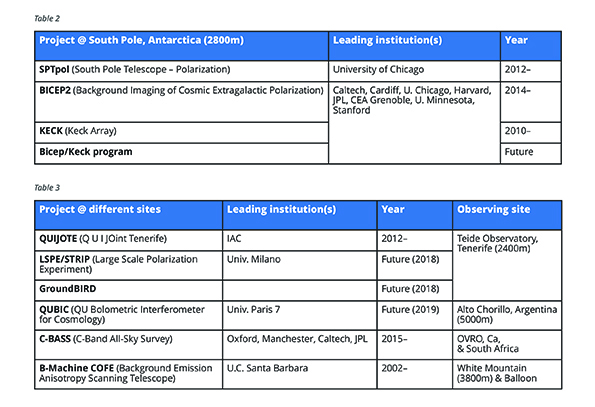