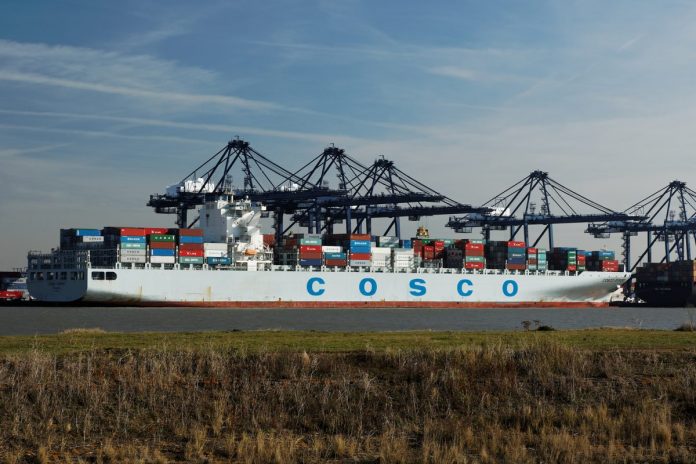 An email virus planted by hackers have been found in the computer systems of a shipping firm, some with ‘millions of dollars’ already stolen

An email virus planted in the computer systems of a ‘medium sized’ shipping firm allegedly redirected ‘millions of dollars’ in payment to a hacker’s account after a cyber attack.

The virus changed payment details in emails from suppliers, redirecting the money into another account. and was found in an email investigation by CyberKeel.

The discovery was made during was an email investigation by security firm CyberKeel.

The incident highlights an ongoing security issue within the shipping industry.

Shipping giant Maersk was affected by a similar attack in June of this year and revealed their estimated losses to be around £155million.

The ‘NotPeyta’ cyber attack affected several businesses and lead to some of Maersk’s port systems having to be shut down in order for the problem to be fixed.

Other incidents include data concerning the destination and contents of specific crates being changed, and attacks which altered the intended course of ships while making it appear as if they were still on course.

Cyber security CEO Chris Rouland estimated in 2015 that 37% of onboard Microsoft servers were vulnerable to attack.

Threats to the industry

Hacking is increasingly being used by pirates both to redirect funds from shipping companies and identifying the location of cargo they wish to steal.

While some attacks involve an email virus or ransomware, some involve easily spreading malware or even onboard attacks.

Freight ships are a popular target for hackers due to the extent of their reliance on computer systems.

Researchers have discovered issues with the security systems of ships, with one independent researcher discovering a ship’s login system was set to the default username and password.

After a number of high-profile cyber attacks in several public and private industries, attention is turning to the task of protecting some 51,000 commercial ships currently active in the world.

Solutions are becoming a greater priority for shipping firms.

A number of companies have issued guidelines to ship crews to help them protect themselves against attack.

Independent researchers are being used more frequently as awareness is growing, and vigilance is being encouraged from the top down in many companies.

With 91% of the world’s trade being carried by sea, it is an urgent matter for shipping firms and many believe it will take a lot to patch up holes in cyber security.