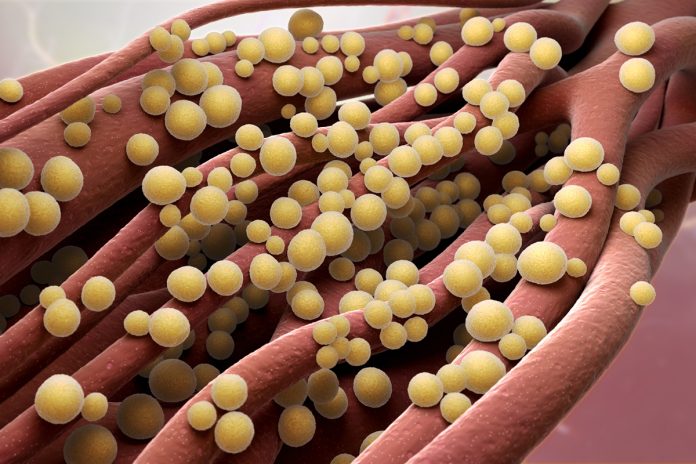 Staphylococcus aureus is a frequent bacterial colonizer of our skin, present in 20-30% of the general population without causing any clinical manifestation. However, it is also capable of causing a wide spectrum of diseases in humans ranging from benign skin infections to severe diseases such as food poisoning, endocarditis, osteomyelitis or septicaemia. S. aureus is also frequently reported in veterinary clinics causing important problems in milk-producing ruminants. The versatility of this pathogen could be explained by different adaptative strategies and virulence properties. For instance, S. aureus is capable of surviving various environmental conditions including acidic, oxidative, high-temperature variations, as well as in nutrient-limited medium. In addition, S. aureus shows a particular capacity to resist to the presence of chemicals including antibiotics or antiseptic molecules. Some of the properties required to resist to these different conditions are intrinsic to the bacterium but others require adaptation and are linked to genomic evolution. Our purpose will be to evaluate the different strategies used by S. aureus to evolve and adapt its genome composition and content following environmental conditions and selective pressure.

In the environment, bacteria from various species are in close contact and could exchange information, nutrients and genetic material. Bacterial death results in cellular envelope disruption and release of bacterial chromosomes. These nucleic acids could be integrated by bacterium yielding to the acquisition of new genes. This process is named natural transformation. Considering bacterial populations, numerous mobile genetic elements could contribute to genome evolution. Plasmids, transposons or bacteriophages represent efficient processes for the acquisition of new genomic features. In S. aureus, plasmids are frequently observed in clinical strains and encode generally for antimicrobial resistance determinants. S. aureus is also able to produce a plethora of toxins contributing to its virulence such as a toxic shock syndrome toxin, Penton Valentin leucocidin, exfoliation toxins A and B, and more than 20 enterotoxins which are generally acquired through the integration of genetic elements (e.g. lysogen bacteriophages).

Exposition of the bacterium to stress or selective conditions contributes generally to the selection of resistant organisms. The most famous example was the introduction of the methicillin (a semi-synthetic penicillin resistant to β-lactamases) in human medicine in 1960. Only 6 months later, the isolation of the first methicillin resistant S. aureus (MRSA) was reported. The resistance was acquired through the integration of a large genomic element containing the methicillin resistance determinant as well as other resistance genes, yielding to multi-resistant strains of S. aureus which are difficult to eradicate. An interesting example of evolution has been reported recently in the veterinary clinic. S. aureus strains infecting poultry showed an increased capacity to grow at 42°C and to alter avian cells reflecting a “human-to-poultry host transition”.

My group is also active in this domain of adaptation of animal S. aureus strains to the human clinics. Originally detected exclusively in pig farmers in Europe, S. aureus belonging to the CC398 lineage has become a worldwide threat associated with livestock, their human contacts and food products. During collaboration work with Doctor Nathalie van Der Mee-Marquet (University Hospital of Tours, France), who performed an active bloodstream surveillance program since 2000, we observed constant increase in the prevalence of ST398 in patients living in animal-free environments; from 0% in 2007 to 15% of S. aureus isolates responsible for severe infections in 2015. Basically, this surveillance program allowed us to identify: i) ancestral ST398 strain only able to colonise animals, ii) pre-evolved ST398 strains able to infect animals, iii) evolved strains infecting or colonising humans and iv) ST398 isolates infecting humans even without contact with animals. Important efforts were deployed using whole genome sequencing approach on these different populations of isolates. Analysis of the genomes of these isolates showed that each population contained specific bacteriophage content. Whereas the ancestral isolate associated with animals are devoid of bacteriophage, emerging clades are characterised by the presence of φ3 prophage variants that encode two immune-modulating proteins, altering or prevent chemotaxis, phagocytosis and killing of S. aureus by human neutrophils. Recently, we mobilised prophages from virulent strains and introduced them in ancestral non-human pathogenic isolate. Our experiments clearly showed new features, potentially mediating the virulence of the bacterium, accompanying acquisition of bacteriophages. In vitro experiments showed that strains containing prophages have increased capacity to interact with human extracellular matrix proteins and increased ability to penetrate into the cytoplasm of non-phagocytic cells. Even if S. aureus is not recognised as an intracellular bacterium, this capacity allows the bacterium to survive in a protected niche, hidden from cellular or humoral defences. In addition, in an experimental model of infectious endocarditis, we showed that ST398 isolates containing bacteriophages were more prone to infect cardiac tissue and to multiply within cardiac vegetations, yielding to more severe infection than the prophage-free parental strains. Phages serve as a driving force in bacterial pathogenesis, contributing both to the evolution of bacterial hosts through gene transfer, and to bacterial pathogenesis at the time of infection. Temperate bacteriophages play an important role in the pathogenicity and cellular tropism of S. aureus.

1 Punctual mutation: error during chromosome replication consisting in the integration of an erroneous bases in the newly synthesized DNA strand compared to the template strand.