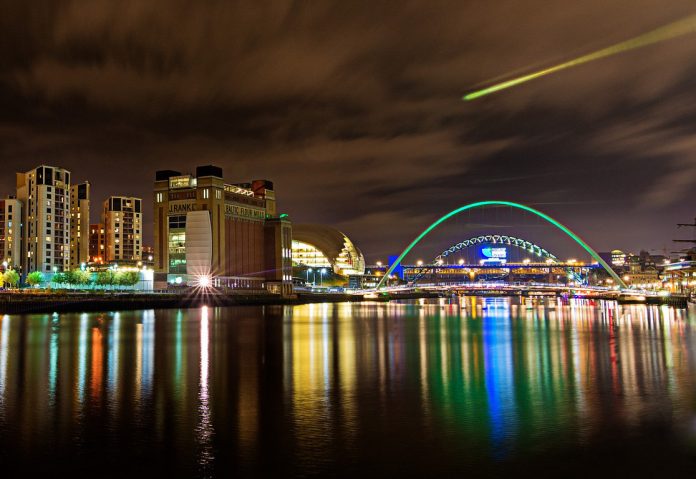 The pioneering Gateshead District Energy Centre is set to cut energy bills and carbon emissions for local homes and businesses. Minister for Industry and Energy Jesse Norman was in the northeast for the scheme’s official opening today.

The centre houses a small, highly-efficient power station which will generate and supply low carbon, low cost energy to around 350 local homes and businesses via a new underground network of high voltage electricity cables.

However, the Gateshead Centre is also able to harness as much as 85% of the waste heat created during energy generation – heat that would be lost to the atmosphere in a conventional power station. This can be sent via a network of underground pipes to heat public buildings, businesses and homes.

“This is an important project which will give our area a real cutting edge,” said Gateshead Council Leader, Martin Gannon.

Twice as efficient as a conventional power station

The first buildings to take advantage of the energy centre will include music venue The Sage Gateshead, Gateshead Civic Centre, Gateshead College, and the BALTIC art centre. All should be receiving heat and power by summer 2017.

Other areas to be connected to the system include future housing developments at a former Freightliner depot, and the site of the Chandless estate (demolished in 2013) where up to 1,000 new homes are planned.

“Our District Energy Centre is twice as efficient as a conventional power station, and far greener, and we can pass on some of those cost efficiencies to local people and businesses in the form of cheaper heat and power,” added Gannon. “This alone will make a real difference to people’s lives.

“However, the commercial advantages offered by cheap heat and power will be obvious to incoming businesses and we believe this is likely to drive up demand for business space here in Gateshead, something that should help to generate much-needed new jobs.”

No grants or subsidies

The project has been entirely funded by Gateshead Council and is expected to be fully self-financing over its lifetime, with the construction and operating costs offset by energy sales in the local area and to the National Grid.

Demand-response company Flexitricity has entered a 15 year deal worth £1m with the centre to supply electricity to the National Grid during peaks and troughs in national electricity demand.