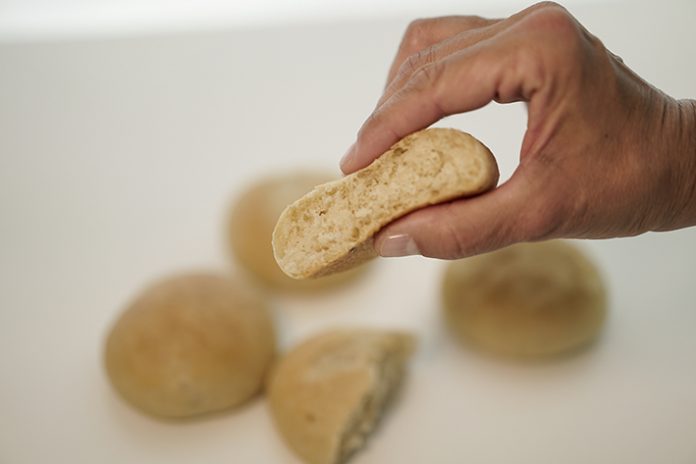 Scribbling notes in a cosy kitchen, Professor Carmen Lamacchia observed the slow rotation of wheat kernels in her microwave oven. It was 2011 and the food chemist from the University of Foggia in southern Italy was going on a hunch.

Could gluten, the protein that causes intestinal damage in people with coeliac disease, be disarmed inside the kernel? Could its toxicity be reduced before it became flour? Tapping into her intimate knowledge of gluten proteins, Lamacchia began testing her hypothesis away from the university labs. She was at home expecting her third child, yet she was equipped with the essentials: water, heat waves, and a stopwatch.

“I soon realised that time was key to achieve detoxification,” said Lamacchia. “I was applying high temperatures and humidity in synergy, but I needed to find the right tempo to induce a steady conformational change at the molecular level of the wheat kernels.”

Just 6 years later, Lamacchia’s early hypothesis has become a patented technology, called Gluten Friendly™. Her formula disarms the toxic component of gluten inside wheat kernels, through cycles of heat, soaking and resting. As a result, proteins crystallise into a new shape, making them unrecognisable to the immune system of coeliac patients.

The Gluten Friendly™ method is a cost-efficient, chemical-physical process that also maintains all the precious organoleptic properties of wheat. The detoxified flour leavens and bakes into fluffy bread, pizza and cookies. The discovery is at the heart of the food-tech start-up New Gluten World, a partnership among Professor Lamacchia, the University of Foggia and cereal giant Casillo Group.

In Lamacchia’s native region of Apulia, wheat fields extend into the horizon. Come summer, the panorama puffs smoke. Farmers set wheat stubbles ablaze to prepare their land for a new agricultural cycle. What is left behind in the furrows caught Lamacchia’s attention. She discovered that these proteins inside burnt kernels behaved differently.

“Glutenins and gliadins, which make up gluten, did not mingle in the kernel after exposure to strong heat, but stayed separate,” said Lamacchia, “the opposite of what gluten does in the dough during baking.” These early investigations became the entry point for the Gluten Friendly™ discovery. The scientist began thinking that, through heat, gliadins and glutenins could be moulded, without burning the kernel.

From kitchen tests, to in vitro lab analysis, Professor Lamacchia has now reached the ultimate phase testing her detoxified flour on humans. New Gluten World has partnered with a hospital in southern Italy, Casa Sollievo della Sofferenza, to conduct the clinical study. Fifty coeliac volunteers are now eating 3 or 6 grammes of detoxified gluten daily, for 3 months. Neither doctors nor patients know who is eating Gluten Friendly™ bread rolls, and who is instead in a third control group that eats gluten-free.

Around 6 grammes of gluten is found in 2 slices of pizza. Previous medical studies show that coeliac patients ingesting such quantities of gluten suffer from diarrhoea, vomiting, and other serious symptoms within 3 days, and intestinal damage within a month.

“My coeliac patients are well and are not reporting symptoms,” said Lamacchia. “This is very reassuring, however, we won’t have the full picture of how the gluten friendly bread has interacted with coeliac patients until all the data comes in.”

Intestinal biopsies sampled before and after the 12-week period will be sent to an independent laboratory in Finland for in-depth analysis. Results are expected in early 2018.

New Gluten World has received funding from the European Union’s Horizon 2020 Research and Innovation Programme, under grant agreement no 732640. With EU support, New Gluten World is already developing a line of industrial ovens for gluten detoxification, with the ambitious goal of bringing the Gluten Friendly™ technology to milling companies around the world.

“To close the nutritional gap between people with coeliac disease and the general population, you need millers, bread and pasta makers from around the globe,” said Lamacchia. “We’ll disseminate our technology and know-how through an international licensing program,” she said, “so licensees can make fresh products that are safe for everyone.”

The World Gastroenterology Organisation estimates that one per cent of the global population suffers from coeliac disease. That is about 70 million people. Affecting children and adults with a genetic predisposition, the autoimmune condition is for life. In people with coeliac disease, gluten triggers an inflammatory reaction that destroys the villi of the small intestine, causing malabsorption of nutrients and collateral illnesses like anaemia, dermatitis herpetiformis, osteoporosis and infertility. One-third of humanity carries genetic markers that indicate a risk of developing the disease.

Currently, the only therapy for coeliac patients is a free diet. That means cutting out wheat, barley, rye, and certain oats. Still, the danger of gluten contamination is always around the corner. Eating socially can become a real source of anxiety.

“I don’t want to speak for coeliac patients, but I believe that many would much rather take a pill than stay away from pasta, bread or pizza,” said Lamacchia. “Unfortunately, this pill does not exist.”

The gluten free industry is conservatively estimated at $8bn. But coeliac’s are not the biggest buyers. The largest chunk of consumers of these products are people with non-coeliac gluten sensitivity (NCGS). They are those who without coeliac disease associate gluten consumption with symptoms of bloatedness, headaches and irritable bowel. Whether as a therapy or a lifestyle, eating free products, comes with a cost.

While nature provides a plethora of healthy gluten free options, industrial gluten free substitutes of wheat-based foodstuff are often enriched with starches, fatty acids and sugars in an attempt to mimic the original taste and texture of wheat flour. Consequently, they bring more calories and a higher glycaemic index, while costing significantly more than the original wheat-based food.

Gluten Friendly™ foods could offer a natural, safe alternative that is also appealing to the wallet. New Gluten World promises that Gluten Friendly™ licensees will sell their products for one-third of the price of gluten free.

“We are shifting the paradigm, from over pricing to fair pricing,” said Lamacchia, “and from fixing the intestine to fixing gluten itself.”