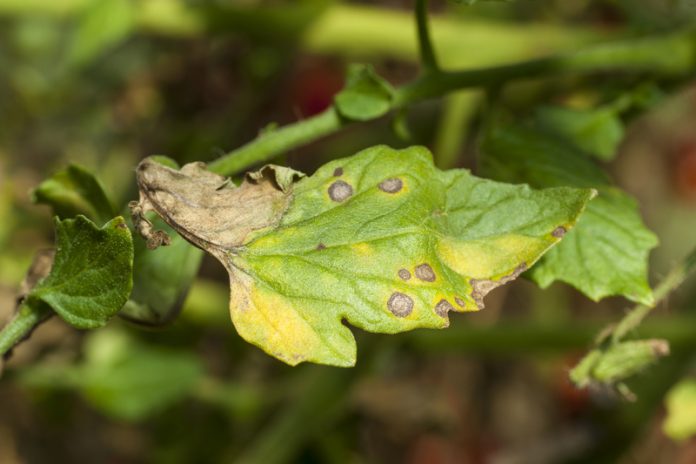 Discussing late blight, Dr Didier Andrivon of INRA asks: is it the top (or bottom) of a much larger, re-emerging parasitic complex ?

Late blight, caused by Phytophthora infestans, is certainly the most feared disease of potato and tomato worldwide. However, it is not the only foliar blight of these crops. Indeed, both are also affected by early blight, caused by a range of Alternaria species.

Early blight is characterised by target-shaped foliar spots, expanding over time. Like late blight, it affects both the leaves and stems, but also the fruits (tomato) or tubers (potato) of diseased crops. Early blight is a severe problem in continental climates, while late blight is most prevalent in oceanic areas. However, both diseases can co-exist on the same crop, and even on the same plant, whenever conditions are favourable.

Early blight severity and incidence are now rapidly expanding in European crops, for at least three reasons. First, the current change in climate across our continent tends to foster earlier and more rapid attacks by Alternaria than in the past, due to warmer temperatures and accelerated crop senescence. Second, the disease was previously held under very good control by the repeated, preventative applications of multisite fungicides also used to control late blight. As these molecules are progressively being withdrawn from use in favour of either alternative products or of more specific active ingredients, targeting late blight only, early blight reappears and increases in severity. Third, Alternaria species causing early blight are often able to develop resistance to major unisite fungicides. Multidrug resistance to one or more chemical families is now detected in many European and worldwide populations of these pathogens, as shown in the Euroblight surveys which now also include early blight.

One of the challenges about early blight is the large diversity of Alternaria species involved. The two major species are Alternaria solani and A. alternata, but a number of other species have been isolated and identified from diseased organs. The composition of this parasitic complex seems to fluctuate across geographic locations, but also over time during the epidemic. Therefore, designing proper control strategies able to encompass this biological diversity is far from easy.

As of now, it therefore seems timely to think Integrated Pest Management strategies with respect not to late blight or early blight only, but against the Solanaceous blights parasitic complex as a whole. Of course, each inidvidual solution included in these IPM strategies will not necessarily work on both pathogen groups. This is why we will need to come up with combinations of multiple  control means, that together will manage the development of blights. This challenge is not easily met. It will require the acquisition of extra knowledge on the biology, taxonomy and ecology of the blights pathogens, the design of novel tools to monitor their presence, expansion and survival,  and improved control means (resistant cultivars, biocontrol solutions, prophylaxis, etc) and decision support systems. It will also require the involvement of a range of stakeholders, contributing expertise and research, to develop and validate such innovative, lasting solutions. Game on!