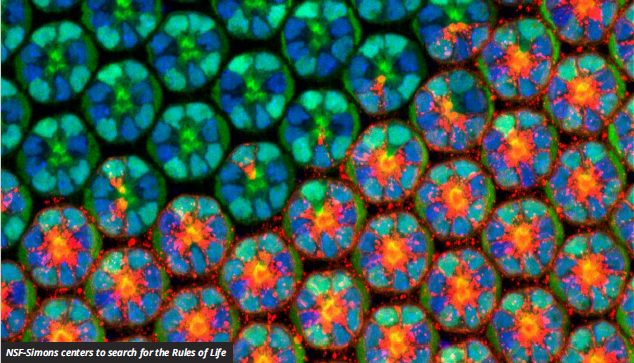 Dr Juan C. Meza, Division Director for the Division of Mathematical Sciences (DMS) at the National Science Foundation (NSF) reveals why mathematics is such a powerful tool for understanding the world around us

In the article, “The Unreasonable Effectiveness of Mathematics in the Natural Sciences”, the well-known physicist Eugene Wigner once wrote about the wide applicability of mathematics even beyond its own field. So, why is it that mathematics has proven such a powerful tool for understanding the world around us?

For many people, mathematics research often seems esoteric, but the results inspire new ways of thinking and commonly lead to novel applications. Here at the National Science Foundation’s (NSF) Division of Mathematical Sciences (DMS), we support research in mathematics and statistics, the research training of the next generation of mathematical scientists and a portfolio of national research institutes.

One of the goals of DMS is to develop new mathematical theories, models and tools to help solve some of the most challenging problems in the physical, biological and life sciences. This research ultimately has a significant impact on the United States’ health, security and economy.

Both products make use of a mathematical technique known as compressed sensing, a breakthrough developed ten years earlier by NSF-supported mathematicians. While the underlying mathematics can be daunting, the idea is actually quite simple. The basis for this technique relies on the idea that many signals (audio, video, images) have a structure that we can take advantage of when they are first measured and then stored. By using mathematical algorithms, we can reconstruct images based on far fewer measurements than we had previously thought possible. One simple analogy is when we recognise a whole song by hearing just a few bars of the melody or recognise a picture from a few well-chosen features.

Using this technique, scanning is strikingly faster, resulting in patients spending much less time inside MRI machines. That’s especially important for paediatric patients, where time inside an MRI must be restricted. The speed-up also allows for lower costs per patient.

The benefits are only now becoming widespread, but it was DMS-funded basic research that led to the new MRI technologies. Compressed sensing highlights the benefits of interdisciplinary research, as researchers from three different mathematical fields – geometric analysis, statistics and computational math – and from astronomy came together to work on this problem. It has been one of the great successes in the mathematical community, with a societal impact that is only just beginning.

DMS’ six Mathematical Sciences Research Institutes run programmes for the research community and have a long history of bringing mathematicians together from around the world to share their work, which often leads to new collaborations.

Some of the activities supported by the institutes include programmes to discuss challenges in the development of materials for quantum computing, machine learning applications for computer vision and data-driven methods for precision medicine to guide treatment decisions – all of which have deep mathematical questions at their heart.

Another DMS guiding principle is collaboration with other science disciplines to develop new mathematics. For example, biology is now more quantitative than ever before because of new technologies like high-throughput, next-generation sequencers and high-resolution imaging and microscopy techniques. Such technologies have led to an abundance of new data for biologists to analyse, data that may answer fundamental biological questions, as well as raise new ones.

Building from that need is one of the most exciting activities emerging from DMS this year: a new partnership with the Simons Foundation – a private foundation that supports discovery-driven scientific research in mathematics and the basic sciences – to create four new Centers for Mathematics of Complex Biological Systems.

This $40 million programme is funded equally by NSF and the Simons Foundation and involves DMS and two other divisions in NSF’s Biological Sciences Directorate: Integrative Organismal Systems and Molecular and Cellular Biosciences.

The centres will apply mathematical approaches in the hopes of developing predictive frameworks for understanding the pathways from DNA within cells to organisms interacting in nature. Such findings have potential for both pure scientific discovery and for a wide range of applications, from agriculture to health. One of the defining characteristics of the centers will be the close and sustained collaborations between biologists and mathematical scientists leveraging their complementary expertise and diverse perspectives.

DMS programmes span a wide range of energy and security applications, as well. Some mathematicians and statisticians are working on developing mathematical models for modelling efficient and reliable electrical power grid systems, while others work on mathematical algorithms for detecting threats such as outbreaks of epidemics like severe acute respiratory syndrome (SARS). Yet others look for hidden patterns in large graphs (like the World Wide Web) that could indicate emerging threats. Mathematicians are even studying ways to help manage and mitigate the aftermath of natural disasters such as hurricanes.

The future of mathematics

In addition to basic research, DMS also places a strong emphasis on training the next generation of mathematicians and statisticians. Through research fellowships, we provide an opportunity for mathematical sciences doctoral students to participate in internships at national laboratories, in industry and at other approved facilities.

Our Mathematical Sciences Graduate Internship fellowship program is aimed at students who are interested in understanding the application of advanced mathematical and statistical techniques to real-world problems, regardless of whether the student plans to pursue an academic or non-academic career.

In 2017, we placed 40 graduate students from 38 universities in 10 national labs. All of the students were able to apply the theoretical coursework they had learned in school to real-world problems like improving computational meshes for simulations, deblurring images and machine learning.

Through the many such programmes and initiatives funded by DMS, new and exciting mathematics research is providing insights into some of the hardest challenges society is facing today, from understanding complex biology to deciphering the fundamental properties necessary to build quantum computers – and understanding their security implications.

While one cannot know where the next breakthrough in science or technology will emerge, mathematics will have been used to better understand or even predict it. Mathematics is essential to society and NSF’s Division of Mathematical Sciences is positioned to support the needed mathematics that will help realise that new and better future.

Division Director for the Division of