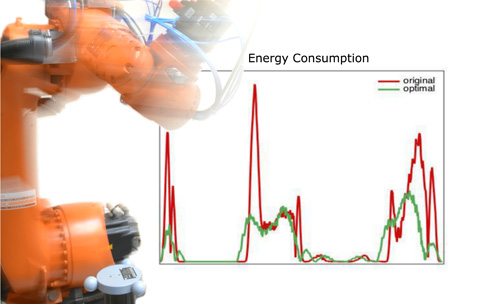 By minimising the acceleration of industrial robot systems, energy consumption can be reduced by up to 30%, while retaining the given production time. This is the result of a new optimisation procedure that has been developed by researchers at Chalmers University of Technology. The research was initiated by General Motors, Detroit, which asked Chalmers to add environmental aspects to earlier collaboration. The last three years this optimisation concept has been further developed in the EU/FP7 project Automation and Robotics for EUropean Sustainabile manufacturing (AREUS), together with, among others, KUKA, Daimler, and University of Modena.

Move slower instead of waiting

Energy optimisation of robot motions reduces acceleration and deceleration, as well as the time the robot is at a standstill, since being at a standstill also consumes energy. A basic idea in the proposed optimisation concept is to let a robot move slower instead of waiting for other robots to catch up, before carrying out the next operation sequence. The optimisation also determines the order in which the various operations are carried out, to minimise energy consumption without reducing the total execution time. The result is an energy optimal schedule, where all robots, but also other moving resources and machines, can be included in the optimisation procedure.

Evaluations on industrial robots show that it is possible to save up to 30% energy and 50% peak power, neither substituting any hardware nor provoking negative consequences on the overall plant production. Note that the required peak power determines the necessary capacity of the power supply system, including the amount of copper in power cables. Also observe the interesting peak power coordination, where a rapid robot motion should be avoided when another robot is performing a power consuming welding operation. This type of coordination is easily included in the energy optimal scheduling, which is the core of the proposed optimization procedure.

The fact that the optimal solution still keeps a desired production time is crucial to get industrial acceptance. Reduced production capacity is seldom an acceptable solution. Furthermore, the paths of the robots are preserved. Only velocity profiles, and waiting times are adjusted in the optimisation, which means that the original robot path planning is maintained. A detailed energy model is normally expected in mathematical optimisation. Since such a model depends on physical parameters, including masses and damping factors that are hard to obtain, the proposed solution does not depend on such detailed models. It is only based on a simple recording of the robot paths, generated by the original robot programs.

The robot joint angles are in the current KUKA Robot implementation recorded and saved every 12ms. This sampling interval is then adjusted by the optimisation procedure. A shorter interval in the optimised solution implies higher velocity, while a longer interval reduces the velocity of the different robot joints. This simplified procedure, including an optimisation of the weighted squared sum of robot joint accelerations, and a resampling of the updated robot motions, generates a significant energy and peak power reduction. The reason is the close connection between power and acceleration, although it is an approximation where not all dynamic aspects are included.

The strength is that the optimisation has a clear connection to the real physical robots, and is based on already existing robot programs. The modification is only focused on energy and peak power reduction, while robot paths and production time are preserved. The optimisation can be used offline in a planning phase. It can also be applied online as an adaption procedure when properties of the system have changed, for instance after reprogramming of a robot, or the introduction of a new product. This makes the proposed method very attractive from a user perspective.

The optimisation tool is included in a software developed at Chalmers, called Sequence Planner. To achieve a safe optimisation, several robots moving in the same area need to be coordinated. Collision zones where robots may collide can then be automatically generated by CAD software for robots. The intersections between sweep volumes of the individual robot motions then determine these collision zones, and a robot needs to book such zones to be allowed to path corresponding region. This collision avoidance procedure is integrated in the energy optimisation. Thus, we obtain both a collision free and energy optimal robot system that keeps the desired production time.

The goal is to make this kind of optimisation standard, and included in robots from the start. However, since the optimisation procedure is based on the original robot behaviour and does not change the robot’s operation path, it can also be applied to existing robot cells. A quick optimisation can then be performed without changing the current production conditions, just reducing the energy consumption. The optimisation concept is also not limited to robot motions, but can be applied to, e.g., automated guided vehicles (AGVs), conveyor systems, press lines, NC and packaging machines.

In the AREUS project, additional activities have been included to further reduce the energy and peak power consumption. The most significant one is to replace AC with DC power grid in production units. This makes it easier to integrate renewable energy sources such as solar panels into factory power grids, and power losses are reduced due to minimised power conversions. Furthermore, a new type of robots driven by 600V DC implies that motor braking generates energy that can be stored and reused. In current AC robots, this energy is lost in braking resistors. The DC compared to AC robot energy saving is estimated to be up to 15%.

Finally, we observe that in robot-intensive manufacturing industries, such as bodywork factories in the automotive industry, robots consume about half of the total energy used for production. This means that the proposed energy and peak power optimizsation could lead to potentially significant savings, especially in automotive industry. 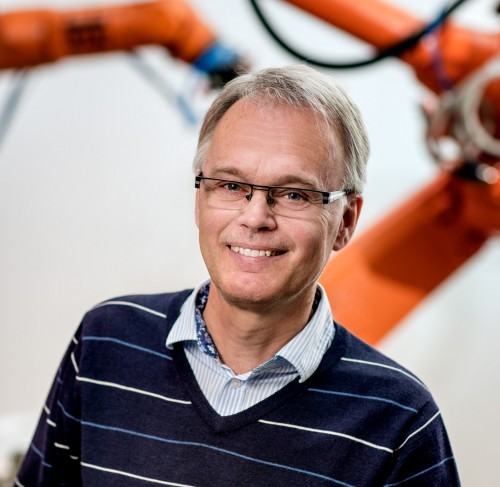 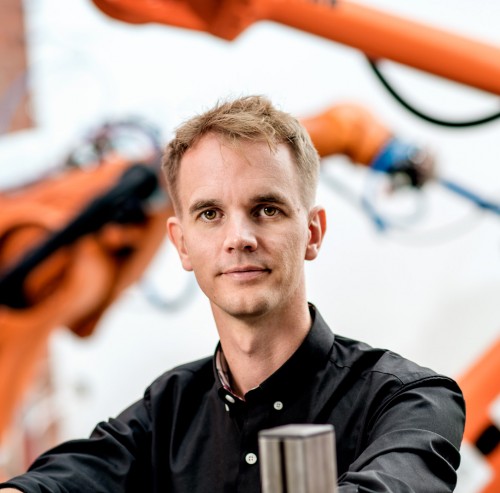