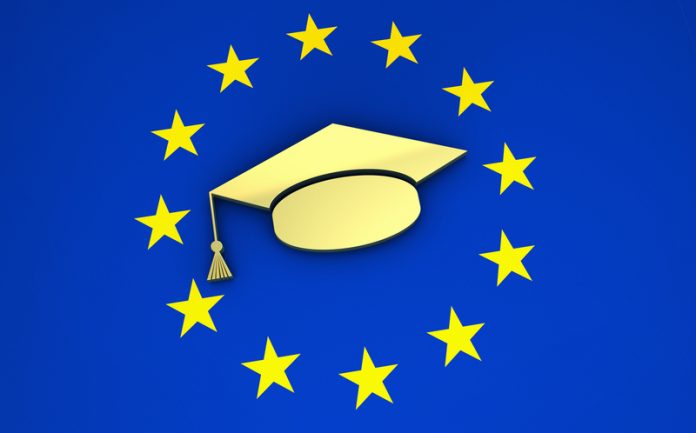 The ‘Learning EU in Schools’ report states that member states across Europe should “encourage and facilitate high-quality training on EU topics for teachers, other educational staff, youth leaders and trainers”. It also recommends a ‘Euro Teacher’ label award.

The report states: “This situation may be remedied if citizens are better informed and encouraged to be engaged and take an active interest in the European unification project.

“One central way to do so is enhancing an EU dimension in school education that can help to overcome Euroscepticism.

“Teacher training – initial and in-service training – needs to systematically prepare educators to teach about the EU and the values on which it is founded.

“Textbooks should guarantee a broader coverage of EU-related topics.”

It adds: “The EU dimension in education is crucial to help citizens better understand – and reconnect them with – the EU.”

Part of the argument within the report stems from the fact the EU has such a big role in the everyday life of its citizens. Therefore, it should be more clearly understood.

It then recommends member states should be “encouraged to support, review and update their education systems – and all forms of EU-related curricula content at all levels of education, including vocational education and training – with a view to strengthening the EU dimension.”

Criticism has been levelled at the report, which is seen as interfering. Furthermore, it is seen as contravening the Education Act 1996, which prevents political indoctrination in schools.

A UK Government spokesperson commented to the Telegraph: “Whilst the government supports policy and best practice exchange on education amongst member states, the Treaty is clear that education is a national competence.

“The EU has no power to intervene in the content of teaching or the organisation of national education systems.

“We do not agree that the EU should get more involved in the development of national curricula.UK legislation requires schools to deal with political issues, including consideration of the EU, in a balanced way. It is up to schools to decide how to achieve this.

“The EU should focus on contributing to the important area of international benchmarking on education standards.”