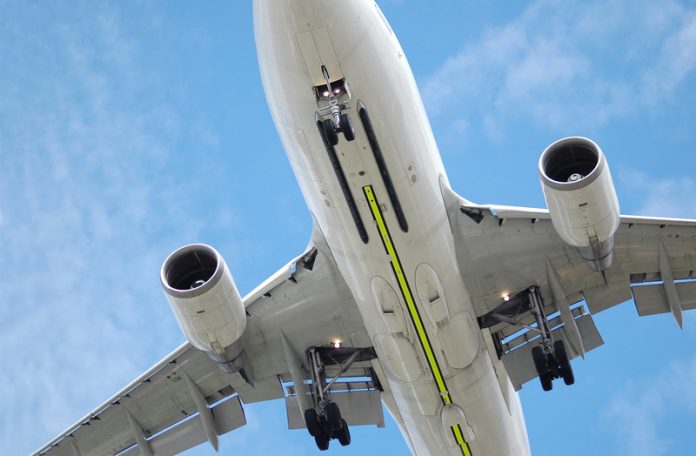 Carbon fibre composites were developed in the 1960s and consist of thin carbon fibres which are combined within a plastic resin to form a composite material, often referred to as CFRP (Carbon Fibre Reinforced Plastic). Typically, the fibres are aligned together in the same direction to produce a ‘ply’, and then these thin layers (often referred to as ‘lamina’) are placed upon each other onto a mould to form the required shape. Finally, they are cured in an autoclave (a pressurised oven) in order to achieve the final manufactured component.

Carbon fibres have a very good strength to weight ratio (i.e. they are strong and light) compared to metals and also enable complicated shapes to be manufactured as a single component. Consequently, they have been used increasingly in aircraft designs over the past 40 years as they enable aircraft to be lighter and hence more fuel efficient and environmentally friendly1. For example, the two most recent commercial jet aircraft designs, the Boeing 787 and the Airbus 350, have over 50% of their structure made from composites.

However, these designs are based upon laying up the plies in such a way, typically using symmetric combinations of 0º / 90º / +45º / -45º orientated layers, so that the material behaves in a uniform manner in every direction, often referred to as ‘black metal’. Consequently, the full possibilities of using carbon fibre are not being exploited. As the fibres are very strong in one direction, it is possible to use them in different orientations, an approach known as ‘aeroelastic tailoring’, so that the coupling between the wing bending and twist deflections with the aerodynamic forces in-flight (a phenomenon that provides the underlying physics of the science of aeroelasticity) can be used to allow the wings deform to achieve the most fuel-efficient shapes, reduce the loads from turbulence and manoeuvres2, and eliminate any potentially dangerous vibrations such as flutter (a violent oscillation that can result in catastrophic structural failure).

Such a tailoring capability was demonstrated in the early 1980s by NASA on the X-29 experimental aircraft which had composite wings that were swept forwards rather than backwards in the conventional manner3. Through the use of optimised orientations of the composite layers in the wing surfaces, it was possible to control the wing deflections to enable good aircraft performance. However, in the past 30+ years, this technology has still not found its way onto modern commercial aircraft, primarily due to manufacturing constraints and certification requirements.

A recent development that builds upon the tailoring approach described above is to ‘steer’ the fibres in each layer so that it is possible to vary the angle of the plies throughout each laminate. Studies related to wing design4 have shown that it is possible to use these variations in the fibre orientations to improve local behaviour such as buckling whilst also ensuring optimal turbulence loads reduction. Testing5 is currently being performed at the University of Bristol to demonstrate the potential of steered composite layers in order to optimise the deflection and vibration of wings whilst also reducing weight. Results have shown that the use of steered fibres does enable improved performance. The major problem with the steered design lies in the current manufacturing capability; it requires some very specialised machinery to be able to vary the orientation of the layers without obtaining either gaps or overlaps in the material. Therefore, the process required to make a structure using these novel designs is very slow and is also not capable of producing the large components needed in aircraft structures.

The benefits from a design viewpoint for the use of tailored composites are clear, so it is likely that industry will overcome the constraints that have held back the implementation of uni-directional composite tailored wings in the near future, leading to improved environmentally friendly aircraft designs. However, due to the high rates of manufacture that are required, it is likely to be a very long time before it is possible to produce aircraft wings with steered composite designs.

2 J E Cooper. “Aircraft Loads – What are they and why are they