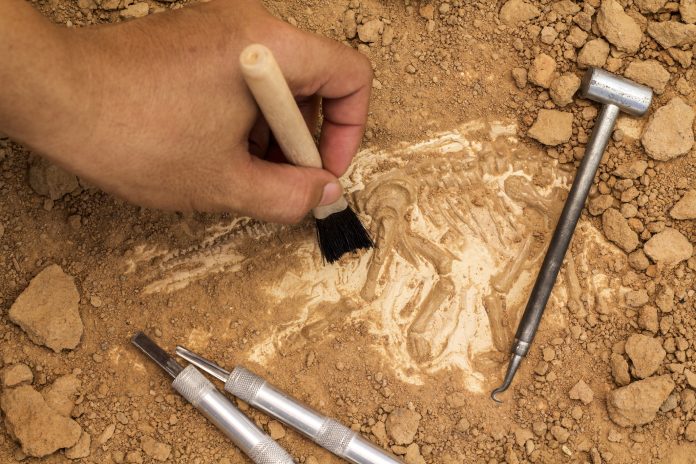 Three embryonic skulls of dinosaurs, found in the Gobi Desert, have been segmented with an AI process via CT scanning technology – which better preserves dinosaur remains

Fossil records of dinosaurs relies on the morphology of the preserved remains of the animals, this can often be a tough process as it requires cutting into the interior in thin sections, effectively destroying the sample in the process.

By using image scanning technology, like x-ray computed tomography (CT), they can reconstruct the structures of inside the fossils with radiation and digital software, providing three dimensions of high-resolution images.

Use of AI can cut process to minutes, instead of days or weeks

Published in Frontiers in Earth Science, the study notes that while the CT technology assists the preservation of the fossils, they do come with their own challenges – such as the scans of numerous materials like fossilised bones versus the rock encasing them.

This is especially difficult with similar densities of materials, which means researchers must rely on manual segmentation, which is an extremely labour-intensive process which classifies sections which look similar in the images.

The use of AI can present this image segmentation in minutes, compared to days or even weeks for a palaeontologist. However, whether a computer can classify sections voxel by voxel on par with a trained professional is questionable – but researchers have attempted to experiment this using different types of deep neural networks, a type of AI model which can mimic the human brain.

Testing the AI systems using over 10,000 CT scans of three well-preserved embryonic skulls from Protoceratops, which is a smaller relative to the more familiar genus Triceratops, the researchers found that the fossils models did not perform quite as well as a palaeontologist could offer.

However, the accuracy and processing speed showed that deep neural networks can significantly reduce the time to differentiate fossils from rock matrices.

Congyu Yu, lead author of the study, said: “Different researchers may have different interpretations on the same structure, which lead to various reconstructions of the evolutionary history.

“In some cases, CT images may be deliberately reconstructed to follow a given idea. Using AI segmentation can detect those frauds without increasing the cost too much.

“Generalization is always a problem for AI-based tasks. We are confident that a segmentation model for fossils from the Gobi Desert is not far away, but a more generalized model needs not only more training dataset but innovations in algorithms.

“I believe deep learning can eventually process imagery better than us, and there have already been various examples in deep learning performance exceeding humans, including Go playing and protein 3D-structure prediction.”

The researchers highlight the need for more experimentation with the AI imaging process, as even the best model from the Protoceratops test struggled to perform well on other dinosaur fossils from the same rock strata and region.

The scientists have noted they are continuing to train and test deep learning models on CT images from more fossil taxa and various preservation environments from previous digs in Mongolia.