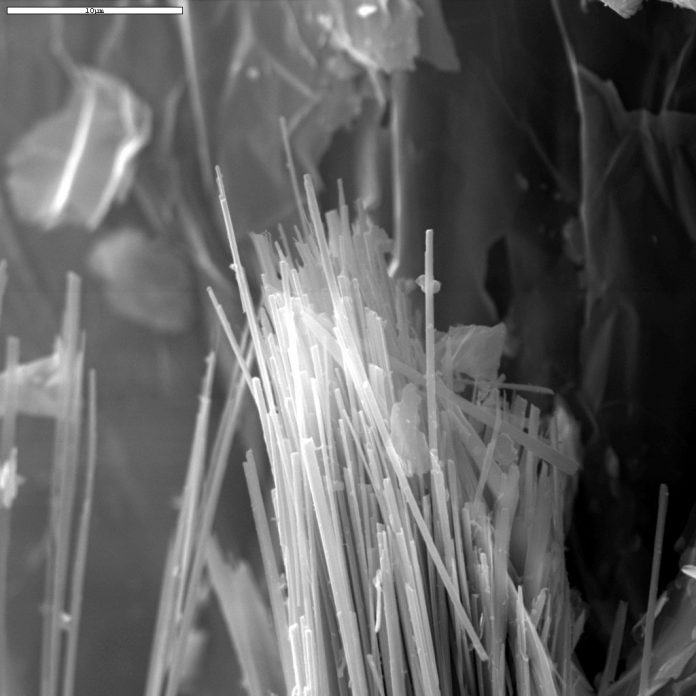 Asbestos is a term used to describe a group of 6 naturally occurring minerals that were mined and commercially marketed for a wide variety of products. Asbestos is just a small subset of dozens of naturally occurring elongated minerals that can cause disease if people come into contact with them on a daily basis. In the U.S exposure to these materials is fast becoming a major health problem. Although the 6 commercial forms of asbestos are regulated in the U.S for occupational exposure, some people argue that those regulations don’t go far enough to protect the public because they are outdated.

Open Access Government Editor, Laura Evans spoke to Dr. Christopher. P. Weis, Toxicology Liaison and Senior Science Advisor for the National Institute of Environmental Health Sciences (NIEHS) in Bethesda, MD, about the many health problems asbestos exposure can cause and the importance of raising awareness.

“Commercial asbestos is a silicatious mineral containing magnesium and oxygen that can exist in a variety of mineral forms,” explains Weis. “It is made up of long thin fibrous forms of minerals or rock. It’s the shape of those minerals, their long, thin nature, along with other physical-chemical characteristics, which causes them to be very poisonous.

“The shape is important because these long particles can make their way deep into the lung by travelling along the laminar flow of the air, as it is breathed in. Since they are made out of rock, they don’t dissolve easily, so the lung has a very difficult time removing, dissolving and eliminating them. When the materials that contain asbestos are disturbed or damaged, fibres are released into the air. Once these particles are then breathed in, they can have a devastating impact on a person’s health. Although sometimes the health problems do not arise until later in life so it’s often hard to tell where the exposure occurred or if it was even asbestos exposure in the first place.

“When someone breathes in asbestos, it causes a series of inflammatory reactions in the lung. When the cells that normally remove particles from the lung cannot remove these elongated mineral particles, they send out signals called cytokines, that trigger inflammation and the formation of reactive oxygen species, which results in fibrosis or scar tissue forming in the lung,” Weis says.

“Essentially, when asbestos is breathed in it causes a series of biochemical responses that further aggravate the problem. This can lead to a variety of diseases including asbestosis, lung cancer, and a very lethal and aggressive form of cancer called mesothelioma. “Importantly and frequently, asbestos may cause non-cancer diseases that progress and become debilitating later in life and that we see a lot of that going on today, in several areas, there seems to be an epidemic of that non-cancerous disease associated with asbestos,” he adds.

Mesothelioma is an extremely aggressive form of cancer that is almost exclusively related to asbestos exposure – often referred to as Meso. If someone gets Meso it’s almost certainly because they were exposed to asbestos. One of the main problems with diagnosis is not always knowing when exposure happened and how, as Weis explains.

“Like most exposures there is a dose-response relationship, the higher the dose the more quickly and more severe the disease. That said, there are many cases of short term exposure that result in disease later in life, the time between exposure and disease is called a latency period. Exposure can occur today or tomorrow, and they don’t see the effects of that exposure for months or years and sometimes even decades, which can be problematic for many reasons. “It’s often difficult for physicians to diagnose the cause of the disease because the patient affected doesn’t even remember being exposed in some cases. They may never even know that they were exposed until they are much older and could develop lung cancer or a non-cancer disease that could be lethal.”

Asbestos-related diseases from exposure have become a major problem in the U.S. People assume that because the mineral is regulated that the problem is under control, however this couldn’t be further from the truth. There are still many ongoing exposures to non-regulated asbestos that can cause debilitating or lethal diseases.

“There is a growing epidemic of asbestos-related disease in the U.S and worldwide that is going on un-addressed,” says Weis. “This is because we are still measuring asbestos the same way we did back in the late 1800’s. The Environmental Protection Agency, under recent revisions to the Toxic Substances Control Act has proposed regulation of the 6 forms of asbestos using assumptions that came into play decades ago.

Unfortunately, regulations have not evolved with our understanding of how the disease has occurred. “Many elongated mineral forms that occur naturally pose public health hazards,” adds Weis. “They just simply have never fallen under any regulatory map in this country and that’s unfortunate because the exposure to these non- regulated forms is increasing nation-wide.

“One example of this is a tragedy that occurred in a small mountain town in Montana called Libby. Several hundred people were killed and thousands injured by a form of asbestos that was not regulated. There are also cases of similar exposure that are not as focused as the occurrence in Libby, such as the use of asbestos bearing gravel on roads and for construction materials in California, Nevada, and in the upper United States, for example. The dust from the roads can contaminate vehicles, migrate into homes, and provide a source of ongoing exposure that may last for years.”

Raising awareness to the risks of asbestos exposure

Raising awareness of the health problems caused by asbestos exposure is key to ensuring people are aware of the risks. Especially as there is such a close link between exposure and lung disease. Some people will be unaware, for example, that if you smoke and work in places where you are likely to be exposed to asbestos, you run a greater risk of developing lung cancer.

Without people knowing the true damage that asbestos exposure could cause, they are at risk. Weis highlights how the incorrect assumption that asbestos is regulated puts people at risk.

“Awareness is probably one of the most important things, but the only way to really reduce the risk is to break the exposure pathway. For example if there is a residential development in an area known to have asbestos – we have one just south of Washington DC for example – and one is aware of the fact that basements and houses are being built on naturally occurring asbestos, there are many steps that can be taken to minimise or eliminate the exposure. However, without knowing about this problem and without taking the necessary actions to understand what the exposures are, there is really no way to eliminate the exposure and therefore the disease.

“The key thing to remember and think about is that asbestos exposure occurs to a wide variety of elongated minerals outside of the 6 that are regulated. Until we understand that and take active measures to protect public health for the un-regulated forms of asbestos, the health epidemic that is increasing worldwide and in this country will continue,” Weis concludes.

Office of the Director – National Institutes of Health/NIEHS