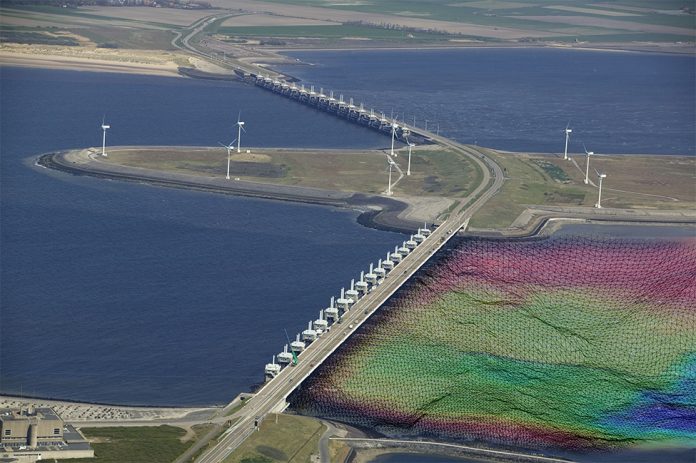 The interaction between soils, waters and structures are of great interest in the engineering sector, here Alexander Rohe from Deltares outlines why

In many environmental and civil engineering areas, such as geophysics, engineering applications and industrial processes, the interaction between soils, water and structures is of great interest. In particular, sudden catastrophic landslides, flow slides, avalanches and debris flows can cause a lot of damage in many parts of the world, due to their rapid movement and large travel distances. Similarly, failures of man-made structures (i.e., levees, dykes, and embankments) that can occur during intense rainfall, storm surges or tsunamis can result in severe damage.

Modelling soil and water, however, causes conflicts in many existing numerical frameworks. Soil is a natural material with heterogeneous and varied properties – from organic peats in the fens to sands and gravels at beaches and rivers. Soil remembers its past. So it is history-dependent, and its material behaviour is non-linear. Water can flow. It can be very dynamic, turbulent and can move across large distances. Concepts of both fields – solid and fluid mechanics – are adopted and combined in the material point method (MPM). Based on this unified numerical framework, a computational software tool is being developed, aiming to model the interaction of soil, water and structures.

Six universities (Barcelona, Berkeley, Cambridge, Delft, Hamburg and Padova), as well as the Dutch research institute Deltares, are joined together in a research initiative (Anura3D MPM Research Community)1 to further develop advanced scientific methods which are implemented for engineering use in freely accessible and open source software. In the scope of the European research project MPM-DREDGE2 (grant agreement PIAP-GA-2012-324522), the first international conference on the material point method for “Modelling Large Deformation and Soil-Water-Structure Interaction” (MPM2017)3 has been held to share the developments.

What have we learned about soils, waters and structures?

Ploughing of the seabed is needed for the installation of cables and pipelines, and is an increasing area of construction, given plans in the UK and elsewhere for offshore marine energy. MPM is being demonstrated as a numerical tool to model seabed ploughing to enable predictions for tow force and speed needed for realising an expected trenching profile within given ground conditions.

Bridges represent a key part of the infrastructure, playing a critical role in emergency response and post-event reconstruction after tsunami impact. MPM is used to numerically model bridge loading due to tsunamis, including the influence of debris carried by the tsunami, to evaluate demands on bridge superstructures. These problems involve complex contact interactions between solids and fluids that are not easily accommodated using typical fluid-oriented or solids-oriented numerical frameworks.

Liquefaction flow slides are the main geohazard for subaqueous slopes composed of loose sand and form a major threat to the safety of coastlines in the Netherlands and elsewhere. During a liquefaction flow slide the sand instantly transforms from solid-like material to a liquid-like behaving material. Often large volumes of sand are displaced over vast distances in a short time. MPM is used as a numerical modelling framework and encompasses both pre- and post-failure behaviour. This enables the quantification of consequences of flow slides and thereby a better estimation of risks.

The scientific results of the MPM2017 conference are published in the Procedia Engineering series (volume 175)4. A selection of the most relevant papers is included as featured articles in a special column of the Journal of Hydrodynamics5. The second conference, MPM2019, will be held in Cambridge, UK in January 2019. In regular training courses, practitioners are being trained in the application of Anura3D MPM software, to develop advanced solutions for daily engineering challenges.