Carbon nanotubes (CNTs) are an allotrope of carbon having the form of a hollow cylinder and are often compared to rolled-up sheets of graphene. The cylinder wall is composed of a layer of carbons atoms and depending on the number of concentric layers they are classified as single-walled (SWCNTs) or multi-walled (MWCNTs), but the term double-walled carbon nanotubes (DWCNTs) is also often used in the case of two walls. A single carbon cylinder, be it a SWCNT or a component wall of a MWCNT has a certain ‘twist’ or chiral angle, which is mathematically captured by the two indices ‘n’ and ‘m’.

The n,m indices not only completely describe nanotube chirality, but they also determine the closely related nanotube diameter and the electronic band structure. Thus, it is the chirality of the CNT that has the most impact on its optical and electronic properties. A slight change of the chiral angle yields nanotubes that are metallic conductors or low or high band gap semiconductors. For semiconducting CNTs, the band gap is inversely proportional to the diameter. 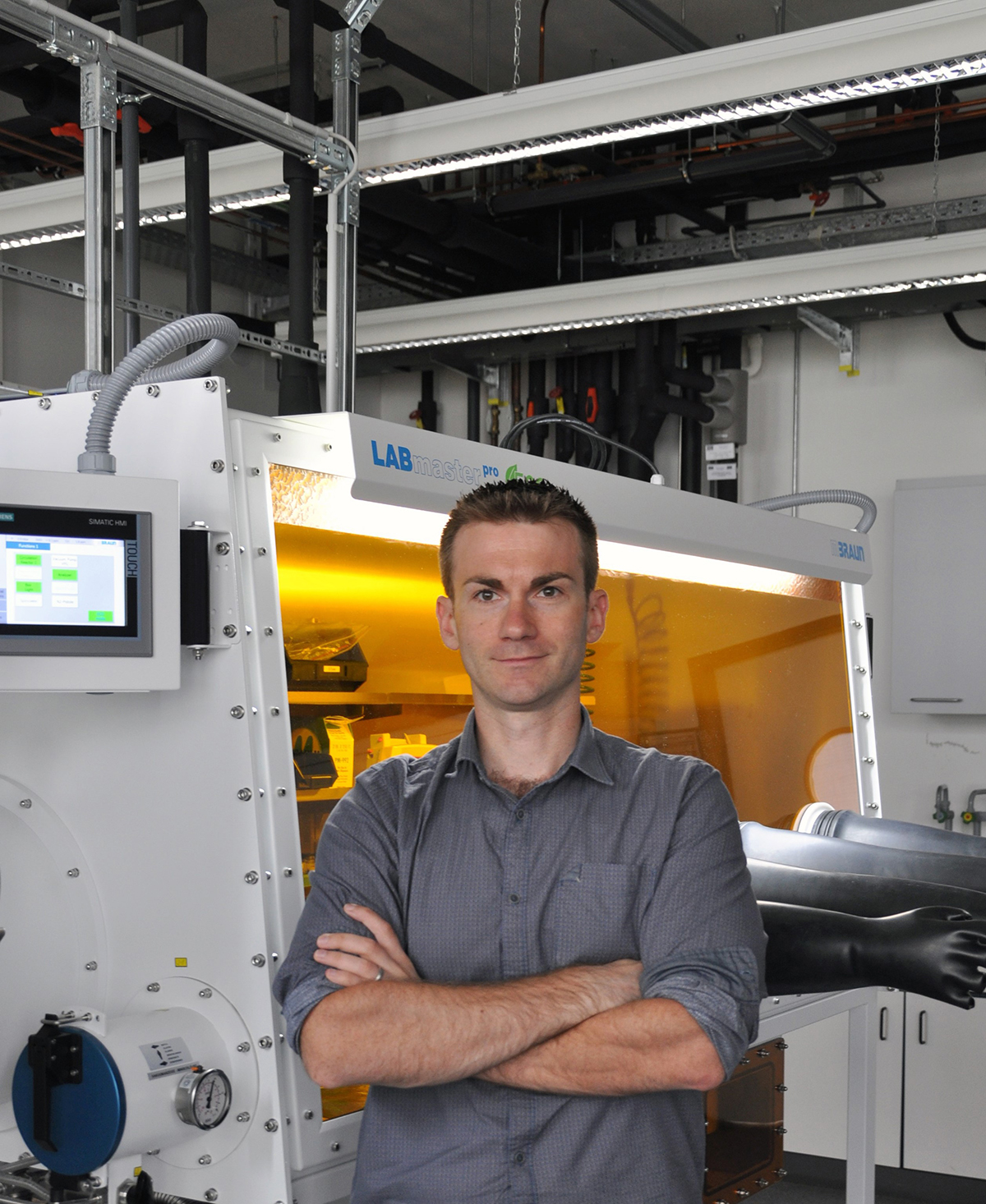 The ability of chirality to tailor their material property has resulted in CNTs being one of the most intensively studied nanomaterials of the past two decades and our fundamental understanding of their unique electronic, physical, chemical and optical properties has grown enormously. Coinciding with these discoveries is the growth of an ever-increasing list of potential applications for CNTs and these can be found across all fields of science from photonics, telecommunications, batteries, fuel cells, high-frequency transistors, biosensors, novel memory devices, cancer research and solar cells.

CNTs meet all of the requirements for next-generation electronics to become environmentally stable towards humid, hot or high ultraviolet radiation conditions, become flexible and potentially be made entirely from carbon to aid disposal at the end of the product life–cycle. For example, metallic SWCNTs (m-SWCNTs) have been shown to exhibit current densities on the order of 108 A cm-2 and semiconducting SWCNTs (s-SWCNTs) to have field effect mobilities of 105 cm2 V-1 s-1.

Despite their amazing properties, two decades of research and the promise of future applications, the reality is that the number of real-world uses for CNTs remains limited. Single chirality CNTs have remained an exotic nanomaterial that is only available in the research laboratory from which proof of principle devices can be made but these rarely reach the market. 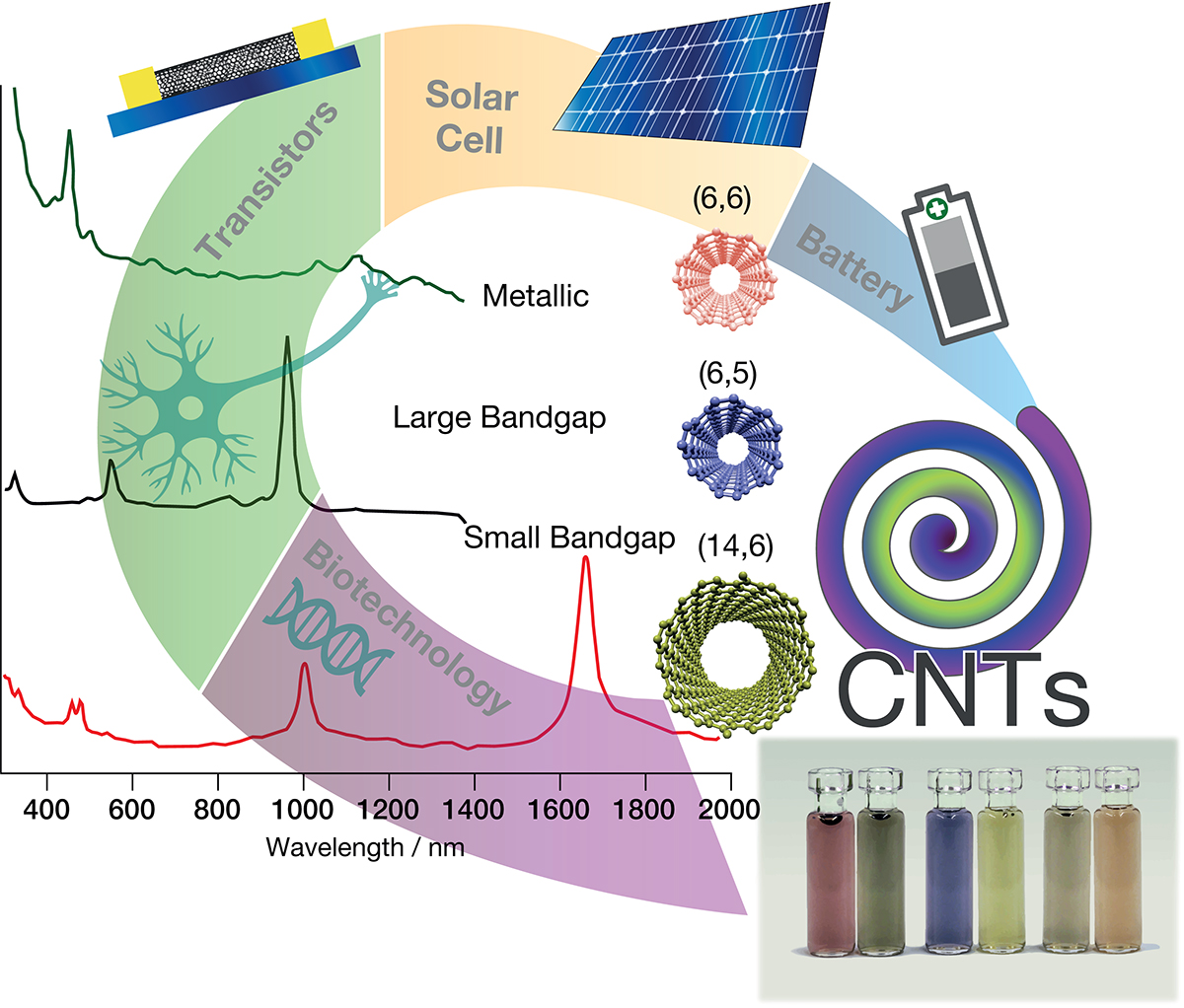 This is because type selected CNTs currently do not fulfil the most basic of engineering requirements; chirally pure CNTs are not available in large quantities, require costly chemicals to synthesise, suffer poor reproducibility between batches and these are time intensive to prepare. These problems are related to their synthesis. To date, there is still no method to selectively grow CNTs with arbitrary control over the (n,m) type and most synthesis methods produce a 2:1 mixture of over thirty different semiconducting and metallic chiral species.

Post-synthesis sorting and processing are, therefore, necessary and the efficacy at which the 2:1 as-grown mixture of CNTs can be dispersed, enriched and separated according to their diameter, length, wall-number, electronic property, chirality and even enantiomeric type has come a long way. Highly selective separation techniques have been developed in both aqueous and organic solvents and it is precisely these techniques which have enabled many of the aforementioned proof of principle devices.

However, the finesse of aqueous based techniques far surpasses that of organic extraction and affords not only a much larger library of single-chirality CNTs but also provides industrially relevant quantities.

These techniques are reliant upon the use of surfactants which form (n,m) specific surfactant shells around the CNTs when dispersed in water. It is these differences in the surfactant shell which modulate the interaction of the CNTs with a third medium (size exclusion gels, density gradient mediums, polymers, or DNA strands) and what the team in Karlsruhe use for separation. To date, the team have developed automated gel-based methods to prepare milligram quantities of metallic and semiconducting carbon nanotubes, chirality pure single-walled carbon nanotubes and even double-walled carbon nanotubes sorted by their inner- and outer-wall electronic type.

However, most recently the team developed an approach to separate CNTs in one to three steps using an aqueous two-phase (ATPE) system consisting of polyethylene glycol (PEG) and dextran (DX). Titration experiments revealed the separation to be driven by the pH of the suspension and each (n,m) species was found to move from the bottom (DX) to the top (PEG) phase at a unique pH. This results in a methodology that is as simple as pipetting known volumes of acid, stirring and allowing the desired nanotube to separate. It is also compatible with existing industrial processes and can easily be scaled-up.

This is a very exciting time for CNTs because we can now start to talk about real-world applications, explains Dr Flavel and the team are currently concerned with controlling the order and orientation of CNTs on the macro scale. To this end, they are preparing CNT-inks with liquid crystal concentrations from which highly aligned nanotube thin films over large areas are possible.

Already, this newfound control is allowing the team to use CNT thin films as the electrode material in silicon: nanotube solar cells with an impressive power conversion efficiency of 16% or with the goal of creating an all-carbon solar cell as the light harvesting layer in combination with fullerenes.

The Flavel research group has received funding from the German Research Foundation (DFG) through the Emmy Noether and Heisenberg programmes under grants FL 834/1-1, FL 834/5-1 & FL 834/7-1.