Luigi G. Occhipinti and Jong Min Kim from the Department of Engineering, University of Cambridge, explain an exciting aspect of nanotechnology that concerns the emergence of quantum dot-based technology for next-generation smart lighting and displays

Colloidal quantum dots (cQD) have emerged over the past decade from lab curiosities to a multi-billion-dollar component market enabled by these optoelectronic materials. It is one of the most relevant success stories of nanotechnology, where the bottom-up design of nanoscale materials influences and determines the success of macro-scale device applications across multiple sectors.

Since their discovery, Quantum Dots (QD)s have featured in a range of optoelectronic devices, including TVs and displays, light-emitting devices (LEDs), solar cells, photodiodes, thermoelectrics, photoconductors and field-effect transistors, while QD solutions have been used in a number of in vivo and in vitro sensing and labelling techniques for medical imaging.

Professor Kim’s team at Samsung demonstrated the first back-lit cQD-based display device in 2006 and 2010 [Photo luminescent (PL) mode], followed by application to new displays and lighting [Electro luminescent mode (EL)] in 2009, 2011, and 2013. The cQD backlight unit for LCD displays is now in the market under the brand name of Samsung Quantum Dot displays (Samsung SUHD TV), introduced in 2015.

The global QD-based products market will be potentially valued at more than $35 billion by 2030, according to major market analysts, with the high definition TV displays dominating the end user segment for QD-based products. According to Markit, worldwide sales in TV market are dominated by quantum dot LED with 2.687 million TV sets sold in 2018, versus 2.514 million for OLED TV sets, and projected to exceed 4 million QLED units in 2019 versus 3.6 million units of OLED. 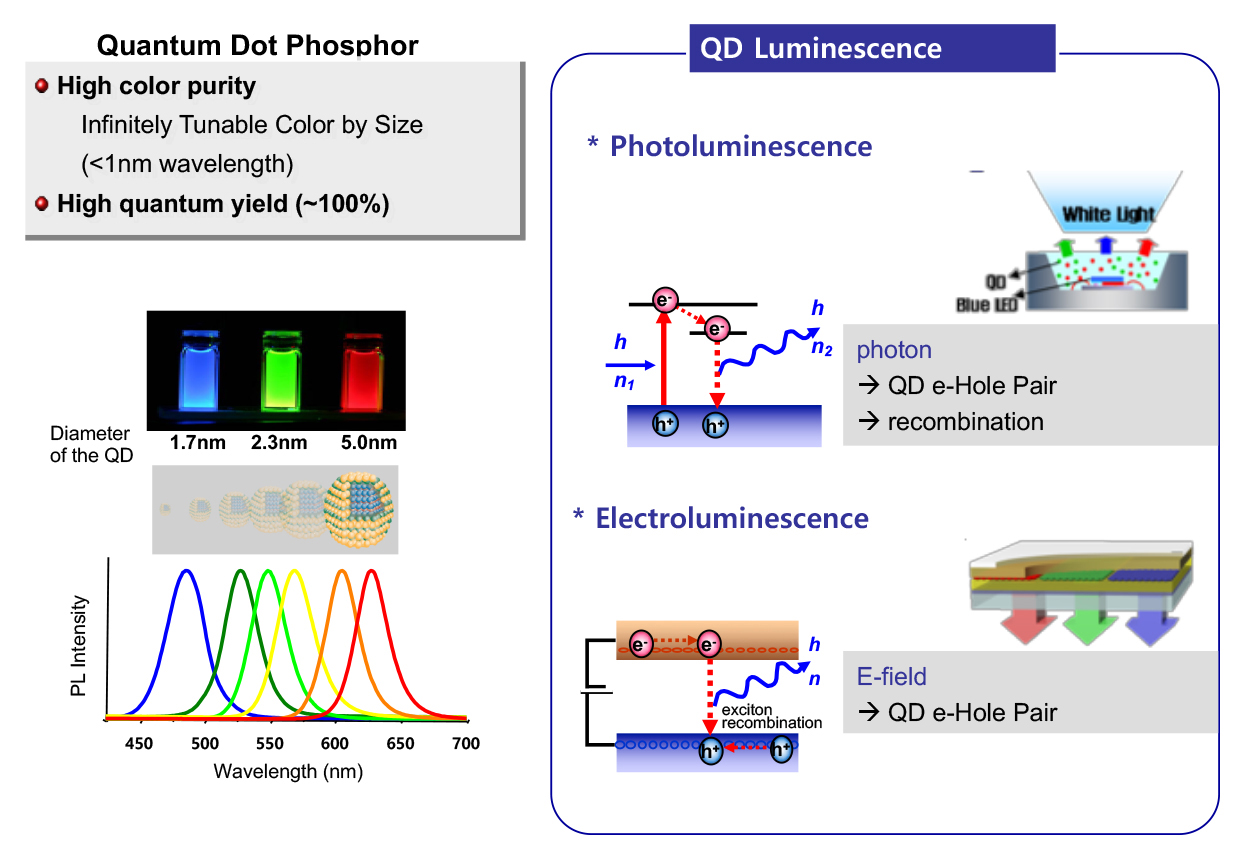 Also in the photovoltaic energy generation sector, the use of QDs to improve the conversion efficiency has generated opportunities for several pioneering research groups and companies to attract multi-million dollar investments.

Among the main academic groups developing science and technology on quantum dots, the University of Cambridge has active research programmes and engagement activities supporting future evolution of these unique nanotechnology materials and their applications.

The Cambridge University Engineering Department (CUED) is the largest university science or engineering department in the UK; in the 2014 Research Excellent Framework, 53% of research was rated 4* and another 42% rated 3*.

Science and technological innovation on colloidal quantum dots (cQD) have the potential to increase energy efficiency in visual and lighting systems while also enabling new paradigms of functionality. The study of cQD is an interdisciplinary field of physics, chemistry, materials science, and engineering.

For instance, in the EPSRC-funded project SmartQD (Smart Quantum Dot Lighting, EP/P027628/1), the group led by Prof. Kim (Principal Investigator) and Dr Occhipinti (Co-Investigator), among others, is working in collaboration with their industrial and academic partners to design and develop new environmentally friendly non-toxic cQD scalable materials, and to advance their manufacturing processes and device fabrication tools toward next-generation smart lighting applications.

As for QLED technology application in displays, the superior colour purity and brightness that photoluminescent (PL) cQD offer compared to traditional phosphors and OLED, is positioned to bring disruptive innovation in the lighting market.

This is associated with lower materials production costs of cQDs and their monolayer deposition methods based on the nano-transfer printing capability, towards the next generation of sustainable lighting technologies.

In SmartQD, the investigators expect that cQD LED may complement or replace current technologies for smart lighting thanks to their unique characteristics of: i) High colour purity with narrow emission (absorption) bandwidths, ii) Colour tunability/band-gap engineering through size control, iii) High photostability and lifetime.

The SmartQD team at CUED has broad experience in nanomaterials synthesis and scalable manufacturing, including cQD, organic and 2D materials, to address enhancement of state-of-the-art materials and to achieve cost reduction in manufacturing by using continuous, as opposed to batch, cQD synthesis, monolayer resin-free processing, along with device integration and packaging for general and smart lighting applications.

Design and prototype development of cost-effective cQD LED lighting devices that can be manufactured on flexible substrates and controlled through an active matrix driver to implement smart aesthetic features will be produced and showcased.

Meanwhile, the engineering research focuses on the manufacturing and processing aspects to create mono layer-controlled cQD films with entire close-packed and almost void-free structure using dry-transfer printing methods. This will enhance the efficiency and reliability of the optoelectronic film for optimal performance of EL cQD active devices.

Interface control based on a layer-by-layer transfer process will be employed in order to obtain highly uniform monolayers which can be expanded to multilayer stacked film processing including interface layers. The mass production of high-quality cQD with high photoluminescence quantum yield is critical to achieving the proposed target.

Cd-free cQD materials have been also demonstrated by major suppliers of QDs such as Nanoco (UK), Nanosys, QD Vision (US), and Merck (Germany), who are among major producers in bulk, of Cd-free cQDs for backlight application in LCD displays. Besides Samsung, other device manufacturers and system integrators such as LG, Sony, TLC, HiSense have also demonstrated cQD back-lit units for LCD displays.

The manufacturing technologies investigated at CUED in SmartQD are expected to create additional markets for cQD based companies in the materials, film component, process and equipment, and lighting device market sectors.