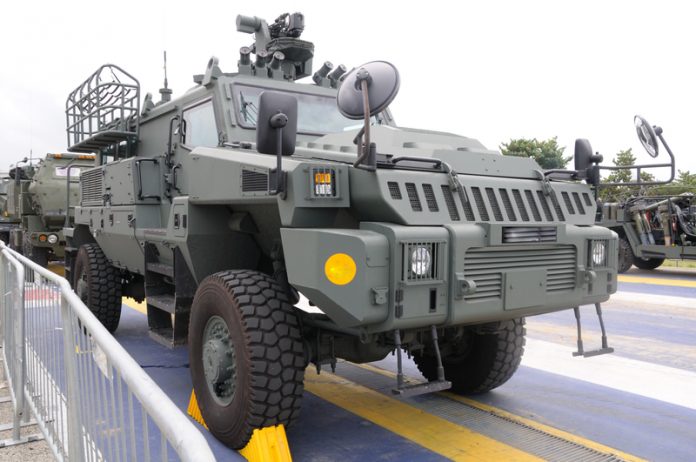 Introducing the combat vehicles market today, research analyst Alix Leboulanger at Frost & Sullivan highlights that the market has suﬀered from a lack of investment for many years. In addition, budget priorities have been diverted to other combat weapon systems due to ongoing deployment, ﬁghter jets programmes and maritime warfare. As such, the combat vehicles market will experience renewal, but they have not been the priority of navies or armies recently.

Leboulanger also reveals that vehicle ﬂeets will be modernised in the future, but that it is now diﬃcult to upgrade the existing vehicles because some of them are over 40 years old. In terms of operational eﬃciency, this is a situation that requires a drastic improvement, she underscores. Leboulanger goes on to expand this point in her own words.

“With an increasing number of potential conﬂicts all over the world, it’s important to be combat ready. It’s not just about renewal but ensuring that you have the full operational capability for deployment in the future.

It is also important that people are trained and able to operate the platform properly. In this vein, we are looking at a very positive outlook for the combat vehicles market over the next 10 years.”

Samuel O’Toole joins the conversation to oﬀer his thoughts on the upgrading and renewal of the existing ﬂeet, as opposed to buying new ones. The funding has basically been reactive rather than proactive, he explains, adding that the lift in Counter-IED equipment requirements can be attributed to the growth in the IED threat from countries such as Afghanistan and Iraq. “It was in Afghanistan and Iraq where you saw the investment reactively going towards armouring the vehicle, rather than upgrading the ﬁrearms part of the package.

More recently, civilian UAS, which can be purchased commercially, have become an aerial threat to vehicles, as demonstrated by current tactics in use by Islamic State.

O’Toole adds that while much of the equipment is decades old, the issue now is how are militaries going to get out in front of what the requirement is going to be in future, instead of paying the price in blood, sweat and tears. He also tells us that the combat vehicles market today has not had the glitz and the glamour of other defence equipment programmes out there.

The mantra is that it has always been easier to get hold of £1 billion in defence than it is for £1 million and added to that, funding for an F-35, for example, can always be found, but ground capability requirements tend to get left behind. He goes on to expand this interesting point to us in his own words.

“It is relatively small in terms of its footprint, but it is seen to be something that will have a greater prevalence in the event of a conﬂict, particularly due to the requirements to move at an increased speed around the battle space. The ability to manoeuvre quickly when you are facing a near-peer adversary when looking at potential threats out there, will be a much higher priority than it has been when combatting counterinsurgency.

“When it comes to counterinsurgency operations, the priority is to minimise collateral damage, avoid civilian casualties and really slow down the pace of operations, contrasting with those in a near-peer conﬂict where you are dealing with heavy artillery and air strikes.”

“With an increasing number of potential conflicts all over the world, it’s important to be combat ready” Leboulanger adds, stressing that the vehicles need to be tailored so that more weapon systems can be added, and they need to be a bit more agile in terms of both energy and propulsion.

There is a lot going on in terms of the hybrid engine for fuel eﬃciency and the vehicle design, but also at the systems level, there is an ongoing trend over the last 10 years of open systems architecture, to ensure that diﬀerent types of vehicle can communicate with each other. The ﬁxed commonality of vehicle systems on the ground, as well as ﬁghter jets and helicopters, is a point Leboulanger stresses so that those who are deployed have a full spectrum of information available to them.

A ﬂeet of brand new and upcoming vehicles with a new communications system is what the future holds, she reveals. “There is also one exciting trend, which is more about unmanned systems and ground vehicles system robots, which have already been deployed, mainly for mine clearance. The trend now is to improve such small robots and use them for cargo supplies, without risking the lives of operators for example on a convoy. We are not at the stage now where we can have robots engaged on the battleﬁeld, but that is the next thing which may come over the next 30 years.

“There are many trials going on in this area now, mainly in the United States, potentially looking at manned platforms and robots to carry any additional equipment.”

O’Toole concludes by explaining that modern vehicles will become increasingly modular in design, with easily removable components, so they become more agnostic in terms of what systems are on board.  Previously, there were many diﬀerent platforms for different tasks; the future concept is that you would have a range of very similar platforms. In some cases, the same platform will support multiple roles, such a communications hubs and armoured troop mobility.

“The intention now is to minimise the number of static headquarters on the ground, of the type seen in classic images of Afghanistan like tents and compounds. The principle in future conflicts will be to keep the headquarters on the move and to do that, you need to put all the communications capability into a vehicle.

“There is much endeavour going on now to create the mobile hotspot that operates much in the same way as the civilian world, in that you can have access to satellite, Wi-ﬁ, broadband, HF and VHF on a truck. This would give improved situational awareness, information ﬂow and improved decision making.”