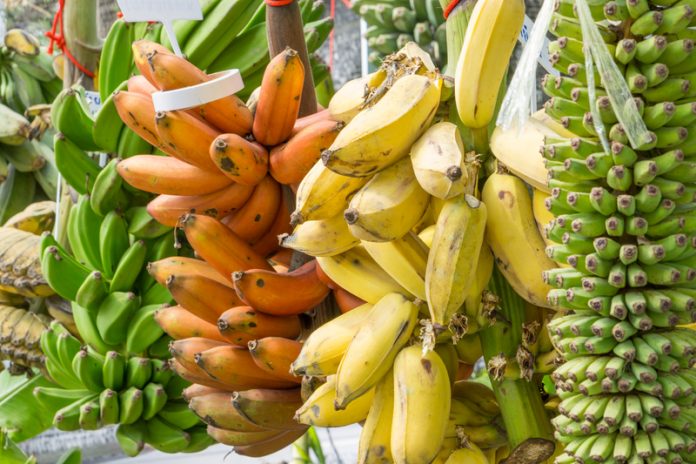 Reports of an imminent global banana shortage are overblown and self-serving, write the International Institute of Tropical Agriculture’s Rony Swennen and James Legg

Western consumers purchase standardised agricultural products as this seems to be the guarantee for high quality. Commercial agricultural companies, therefore, cultivate large fields with one single variety of a crop. The exposure of a single variety over large areas and during many years is not just ecologically unsound, but the platform for the fast spread of a disease and/or pest. Typically this is then controlled with pesticides, often efficient in the short term only. And when the disease gets out of control, the press (trained as they are) write horrific stories as if all is lost and famine is at our front door.

The $11 billion industry of exporting bananas is a typical case of how one disease affecting the single export variety in some regions gets worldwide attention, and how a group of scientists and the press, in an alliance to serve their own interests, tell a story that doomsday is tomorrow and bananas are about to become extinct. In their story, they ignore the huge diversity of banana varieties and different banana cropping systems maintained by smallholders as a staple crop. So, while the export trade is in danger, as well as some of the locally consumed dessert bananas, there are no facts to show that bananas that serve as a staple food are susceptible and will go extinct.

About 145 million metric tons of bananas are produced annually in over 130 countries and on more than 11 million hectares. Banana is the sixth most important starchy crop in the world after maize, rice, wheat, potato and cassava. Only 15% are exported, consisting of one single type of varieties belonging to the Cavendish group. These Cavendish varieties, all genetically similar, are cultivated almost in every country by smallholders but the large export plantations are based in a few countries in Asia, Latin America, and Africa.

Almost 70% of the entire export market is in the hands of only 10 countries and about five companies dominate the banana export trade. It is the Cavendish and this linked business model that is threatened by Panama disease. This is caused by a soil-borne Fusarium fungus of which there is a severe strain called race 4 that kills the Cavendish plants and therefore destroys entire plantations.

Bananas are a staple food for 400 million people. Depending on the variety, they are cooked, boiled, steamed, fried, pounded, and even processed into a beverage. It has been estimated that nearly 400-500 varieties are cultivated by smallholders in their home gardens or small fields in association with many other food crops. In Eastern Africa, nearly 70 varieties of cooking and beer bananas are cultivated, covering 50% of the permanent crop area – equivalent to around half of the total area under banana cultivation across Africa and representing 20% of the global banana production.

Bananas are therefore an indispensable part of life providing up to one-fifth of total calorie consumption per capita in Eastern Africa. The average daily per capita energy consumption from bananas in this region is 147 kcal: 15-fold the global average and 6-fold the Africa average. In West and Central Africa nearly 120 varieties of plantains are cultivated, providing a staple food source to more than 20 million people. None of these cooking, beer, and plantain bananas are exported.

Panama race 4 started to affect banana export production in the 1990s with a major impact on the production in the Philippines, Indonesia, and Malaysia. In the meantime, the Taiwanese developed a set of Panama race 4 resistant Cavendish lines. Panama race 4 was inadvertently introduced to Mozambique, in the southeastern part of Africa. It spread rapidly through two large commercial banana plantations where it occurred.

Efforts to remove infected plants failed to control the spread of the disease within the plantations. A lack of resources together with the insufficient political will to apply stringent containment measures, means that Panama race 4 will continue to spread through susceptible Cavendish plantations in Africa, and the disease does, therefore, pose a threat to the future production of commercial dessert bananas in Africa. However, it is important that banana researchers, the media, and other banana stakeholders do not overstate the scale of this threat, not least since there is no current evidence to show that this disease will cause significant damage to Africa’s most important banana crop, which is the food staple produced by non-Cavendish types.

The yield of plantains and cooking bananas in Africa is much lower than that of Cavendish bananas. These staple food banana types do not receive any pesticides as smallholders cannot afford it. However, the International Institute of Tropical Agriculture (IITA), in collaboration with different national and international partners, developed a successful plantain and cooking banana breeding programme, reducing the impact caused by the major pests and diseases: nematodes, insects and fungi.

Several high-yielding resistant plantains (called PITA) and cooking bananas (called NARITA), jointly developed with the national banana programme of Uganda’s National Agricultural Research Organization (NARO) have been developed with yield increases between 200 and 400%. These high-yielding varieties have now been distributed to 10 countries in Africa and five countries in Latin America. In addition, varieties with high yield in vitamin A have been selected.

In several locations, these new varieties have been integrated into the existing multi-cropping systems. The sustainable production of these plantains and cooking bananas is now based on linking high yield to better soil nutrient supplies, production of virus-free material and the large-scale distribution of improved planting material via the private sector. Part of this work received the Al-Sumait Prize for Food Security in 2016.

It is indeed true that the production of export bananas is under threat, as the Panama race 4 disease has devastating effects on the Cavendish variety that dominates the current banana export industry. It is also true that while this variety remains an important component of global banana production systems, we need to do the maximum possible to prevent race 4 spread between countries and continents. However, banana production systems are much more diverse and robust than the monoculture of industrial Cavendish, and with the dynamic breeding successes that have been achieved by using the wide diversity of the banana crop, particularly in sub-Saharan Africa, the future role of the crop in our food systems remains bright. Bananas are here to stay, and we should look forward with relish to many more days, months, and years of eating this wonderful, healthy yellow fruit.