Bob Reitemeier, Chief Executive of I CAN, focuses on the crucial role of parents’ in helping children to develop language

Over the summer holidays, the demographics of the train on my journey into work changes. There are many more families out on day trips– so instead of newspapers, laptops and relative silence, there are comics, tablets and the wonderful sound of children’s voices. Working in the field of children’s communication development, I know that parents’ role in helping children to develop language is key, so I’m always interested to see how much parents talk with their children.

Given the amount of time children spend at home compared to a nursery or at school, it’s probably not surprising that parents are so important in their children’s language development. But studies have shown that the way in which parents speak with their children can predict how proficient they become as a communicator. It also impacts on how well they do at school. One large-scale project which followed up children from pre-school into school found that what parents and carers do makes a real difference to children’s development; activities such as reading to children, teaching songs, taking them on visits and creating regular opportunities to play with friends at home were linked to improved learning.

On my journey into work during August, I see this first-hand. Where families are in open conversation with their children, pointing things out, asking and answering questions their children are fully engaged and often exploring new words. It is a pleasure to sit and observe.

Many of you reading this may be thinking – that’s obvious, isn’t it? Well, you’d think so, but it often isn’t the case. In 2018, I CAN the children’s communication charity, with the Royal College of Speech and Language Therapists produced a report, Bercow: Ten Years On.

This reported on the findings of a review of provision for children and young people with speech, language and communication needs (SLCN). One of the key findings was lack of public awareness of the importance of children’s communication and language. In a survey carried out as part of the review, 77% of parents who were worried about their child’s speech and language difficulties felt that the information they needed was either not available or difficult to find and in a further survey, nearly half of parents did not know what to expect their child to be saying at age two.

It’s now a well-known fact that many children don’t develop the language skills they need to start school. In a survey of school leaders about school readiness, children’s poor speech and language was the biggest concern with 97% of respondents identifying this as a problem and 47% saying it was the most significant. In fact, robust studies show that in some areas of the UK around 50% of children start school with delayed language. That’s a significant number: half the children in some classrooms finding it hard to sit and listen, with only a handful of words, unable to string a sentence together.

There is now more and more known about how important children’s language is at age five. It’s the single most important factor in their reading at age 11 and can predict exam results at school leaving age. Children need good language skills to learn, so having poor language puts children on the backfoot right from the start.

But there is some good news.

The fact that parents play an important role in young children’s language development has not gone unnoticed. In the summer of 2018, Damian Hinds – then the Secretary of State for Education, announced that the number of children starting school with poor communication was unacceptable. He made it his ambition to half that number over the next ten years and the Department for Education launched a campaign to help change the home learning environment, with an accompanying website for parents, called Hungry Little Minds.

National campaigns such as the National Literacy Trust’s Small Talk, the BBC’s Tiny Happy People or Hungry Little Minds are providing much-needed information to parents and carers. Locally, there are many examples of excellent information and resources, for example in Nottinghamshire, Warwickshire, Stoke or Worcestershire.

Often different parents want information in different formats so at I CAN, we are exploring a range of ways to support parents in communities across England. We are leading a Department for Education funded project called Change the Conversation about Language which combines workshops with parents, a network of parent champions and an accessible App so that families have a choice of how they get the information they need and want. Our Talking Point website is a one-stop-shop of really practical information with an online tool for parents to monitor the progression of their child’s early talking, listening and understanding. For parents wanting to speak with someone more directly, our free enquiry line provides the opportunity to speak with an experienced speech and language therapist.

It is often said that being a parent is the toughest job in the world. For first-time parents, one of the reasons it is so tough, especially in the very early days, is the enormous sense of responsibility that comes with the birth of a child. It can also be the best job in the world and one way to make it so, is by helping parents understand how they can positively influence their child’s development. Encouraging language, starting as early as when the child is in the womb, is one very important element of human development, so let’s work together to spread the word – literally! 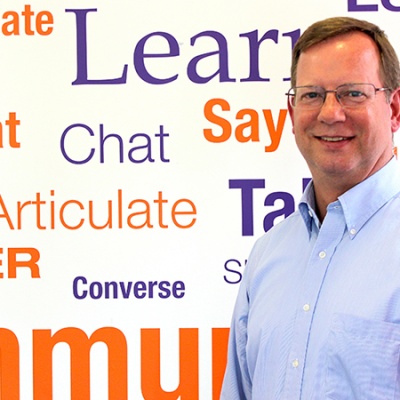