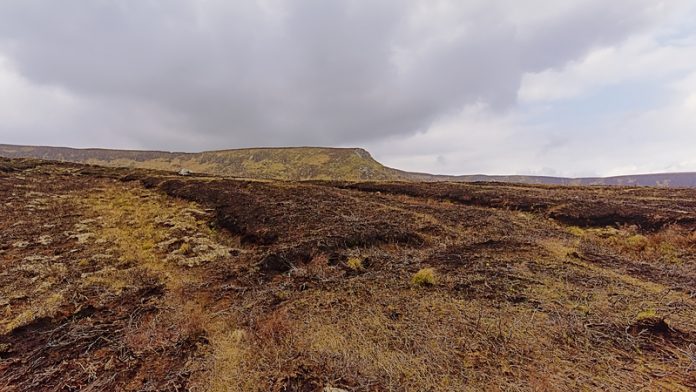 Peat soils are mainly formed by plant residues and are, thus, characterized by a matrix of organic matter in contrast to mineral soils, which evolve from rocks and sediments of mineral origin (Figure 1). Multiple studies have demonstrated that drainage of peatlands, be it for agricultural purposes, be it for forestry or peat extraction, increased CO2 emissions. While a growing number of studies addresses the carbon cycling and the biogeochemistry of peat soils, our understanding of the physical properties and, thus, the principal role of peat soils in the water cycle – in particular of rewetted peat soils – is quite limited.

Bulk density and the related pore space are the first to name when it comes to the specific physical characteristics of peat soils. It is evident that the porosity and the distribution of pore size classes of soils are crucial for water storage and conductance. In natural bog and fen peat soils macropores are abundant (Figure 2). They have a diameter of 50 µm minimum and are well connected. The porosity of such near natural soils can be as high as 90 Vol%.

In need for agricultural production area and based on the paradigm that productive peatlands must be dry (we will illustrate in an upcoming issue that also wet peatlands can be used productively), drainage infrastructure has been built in peatlands, often centuries ago, and globally about 10% of the total peatland area continue to be drained until today. In countries with a long history of peatland drainage, it may be up to 95%. Along with the lowering of the water table via ditch or tile drainage, oxygen enters the soil enabling aerobic transformation processes. The organic matrix of peat soils is transformed by mineralization processes with water and CO2 being the end products. The changes organic soils undergo upon drainage are manyfold. Along with the transformation of the complex organic strata into more and more mineral components goes an increase in mass per unit volume, the so-called soil bulk density. While pristine peat soils are characterized by low bulk density values of 0.1 g cm-3 or even lower, drained peat soils have values of 0.2 to 1.0 g cm-3 (Figure 3). If mineralization processes are active over longer time periods (decades to centuries), the soil organic matter content (SOM) may reach a value of less than 30wt% and the soil no longer qualifies as a peat soil.

The increase in bulk density can be taken as an indicator for the decomposition stage of a specific peat soil type. The higher the bulk density the more the peat soil is degraded. The porosity of a soil and the bulk density are closely linked, and it is clear that soils with a higher bulk density have a smaller pore space (Figure 4). Early stages of the drainage and decay process are also accompanied by a dramatic decrease in macroporosity (Figure 4). The macroporosity not only provides water storage space but is, likewise, crucial for water conductance.

Changes in volume and structure of pore space have consequences for the water cycle. Pristine peat stores up to 90 Vol% water and the water quality in natural peatlands is very high. It is no wonder that peatlands are important drinking water sources (Xu et al., 2018). In comparison to mineral soils and depending on the water table, peat soils store three to four times more water (Figure 5). In a soil profile of 1 meter, intact peat soils store up to 810 liter of water per square meter. This enormous capacity constitutes the buffer landscapes with peatlands provide against heavy rainfall events. The hazardous impact of extreme rainfall events as could be witnessed around the world over the recent years could probably be reduced if the regulatory function of peat soils would be operational.

Only connected peatlands are effective regulators in the water cycle

The water cycle on land connects various components such as the soil and groundwater with water in lakes and rivers. Peatlands in lowland river basins often form along rivers as so-called percolation mires. Percolation mires not only store large volumes of water but can also act as a clean-up system for polluted water coming from upland mineral soils. Peatlands, thus, not only buffer extreme rainfall events but regulate water quality, which is often impaired by an industrialized agriculture. Clean-up processes can only be effective if the peatland is well connected to the surrounding mineral soils. ‘Connectivity’ in this context refers to (lateral) water and matter fluxes between ecosystem compartments such as upland mineral soils and lowland wetlands, which are often dominated by peat soils. The extent of connection is foremost a function of the hydraulic properties of the prevailing soils. If the hydraulic conductivity, meaning the ability of a soil to conduct water, is high water can freely move from mineral to organic soils depending on hydraulic heads. If the hydraulic conductivity is, however, low water might be channeled along preferential pathways or occurs as overland flow. In such a case, clean-up and transformation processes within peatlands are limited.

The loss of macroporosity upon drainage has severe impact on the water-saturated hydraulic conductivity of peat soils (Figure 6). A highly degraded peat soil has hydraulic conductivity values of 3 to 4 orders of magnitude lower than its natural counterpart. In other words, lateral exchange processes between mineral and organic soils are less effective if the peat soil is degraded. Where deep drainage for agriculture , particularly in more continental conditions, dries peats to the extent that they lose capillarity and become hydrophobic (Zeitz and Velty, 2002); the effects on vegetation and evaporation are likely to be more significant.

Given that perennially high water tables are essential to the function of peatlands, hydrological understanding is integral to achieving restoration of degraded systems. Restoration aims may not always represent restoration to a pristine state but, instead, the selective restoration of key ecosystem services/functions. Hydrological ecosystem services are provided by wet peatlands through regulation of both water quality and water quantity (Price et al. 2016). In future, particular attention should be given to physical properties of peat soils and their dynamic behaviour as induced by drainage and also by drying / wetting as well as freezing / thawing, we are lacking behind in explaining observations and phenomena. Research on the physics of peat soils and peat-water-plant interactions shall be intensified to understand how to rewet a peatland optimally and how restored mires can foster climate change adaptation.