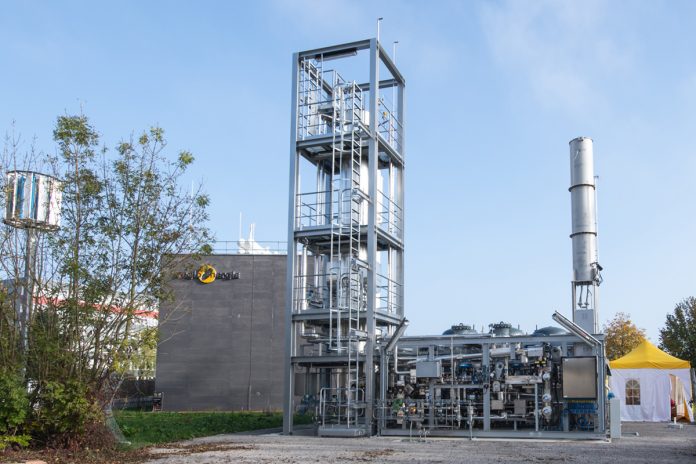 Around 700 billion microorganisms are producing methane from CO2, water and renewable energy in the STORE&GO research facility, as Dr Frank Graf from DVGW Research Centre at Engler-Bunte-Institute of Karlsruhe Institute of Technology (KIT) describes

A key element for the sustainable transition of the European energy system is the efficient storage of renewable energy, especially of volatile solar and wind power. The power-to-gas technology can store renewable energy and – by adding CO2 from natural sources – convert it to emission-free methane. In Zuchwil, Switzerland, a research facility has now started to operate within the STORE&GO project where microorganisms are the protagonists of the process.

On January 28, 2019, everything on the Aarmatt areal of the Swiss energy company Regio Energie Solothurn revolved around their latest employees: around 700 billion microorganisms, known as Archaea. They are now producing methane from carbon dioxide and hydrogen in the STORE&GO PtG demonstration facility in a process called biological methanation.

At the demo site, hydrogen is produced by electrolysis, which is powered by nearby renewable energy sources. The gas from the electrolyser is fed to a bioreactor containing Archaea microorganisms along with CO2 from a nearby wastewater treatment plant. The microorganisms then transform the hydrogen and CO2 into methane (CH4). This renewable gas can be injected into the communal gas network of Regio Energie Solothurn and offers a unique opportunity to store energy and recycle carbon dioxide (CO2).

The biological methanation plant complements the existing hybrid plant of the Regio Energie Solothurn and is being developed in collaboration with the partners Electrochaea, the University of Applied Sciences Rapperswil (HSR), the Ecole Polytechnique fédérale Lausanne (EPFL), the Swiss Federal Laboratories for Materials Testing and Research (EMPA) and the Swiss Association for Gas and Water (SVGW).

How to improve social acceptance of innovative technologies?

Over the past two decades, renewable energy has not only been of scientific interest. Society in Europe has also understood its importance and been generally open to the development of technologies and infrastructure. However, a low level of acceptance or even a strong local opposition may arise, when it comes to turning innovative projects, like the Solothurn PtG plant, into reality. Identifying factors that have an impact on social acceptance is thus crucial for the persistent success of the further energy transition and projects like STORE&GO.

Therefore, the project partners conducted an extensive survey of 500 households in each of the countries Germany, Austria, Italy and Switzerland. The results show that power-to-gas in combination with photovoltaics has the highest acceptance from a number of options regarding new energy infrastructure by the participants. If a mayor, chancellor or the EU recommends a technology path, the acceptance of the households even further improves, as the study shows. All studies mentioned here will be published on the STORE&GO website over the coming months.

Another key factor for any new technology to gain acceptance and prevail is its potential and overall applicability. To generate a gas with a power-to-gas plant, for instance, it is essential to have reliable CO2 sources. STORE&GO research identified large-scale greenhouse gas emitters in various industries all over Europe, such as waste and wastewater treatment, metal production and processing, as well as paper and wood production.

On the one hand, many of these sectors are unlikely to fully decarbonise their processes in the future and might, therefore, be a potential source of CO2. On the other hand, about one-third of these emitters have at least ten wind turbines within a vicinity of 10 km. It is exactly at these spots, where power-to-gas plants could combine the availability of both, CO2 and renewable energy, and serve as a coupling element between industry and the energy sector. The European production potential might this way, increase to about 1000 TWh renewable methane per year, covering about one-fifth of the current European gas demand.

As the STORE&GO pilot plants and research show, power-to-gas has a great potential to couple the two energy systems of electric power and gas. The technology combines the advantages of electrons and molecules and acts as an enabler of the European energy transition. However, it is essential to further reduce production costs of synthetic methane generated through power-to-gas processes. Only if investment costs, plant efficiency and electricity costs are optimised, then will renewable gases will be ready for the market in the near future and could compete with other energy sources.

To understand which factors affect most the feasibility of power-to-gas installations, STORE&GO researchers carried out a detailed techno-economic analysis. This revealed that the type of methanation technology hardly makes a difference with regard to the costs of the generated gas, thus, opening up a range of choices when it comes to plant design. The studies further show that production costs of renewable methane could be as low as about 6 ct per kWh in 2050 if electricity is purchased mainly during periods of low prices in the future.

According to the project results, the regulatory framework is a key driver. But how can the rules for electricity and gas networks be harmonised in the future? Or how can PtG plants be liberated from end-user fees, for instance? Another much-discussed topic over the last decade has been the question of how to establish an overall pricing system on greenhouse gas emission to benefit any low-carbon technology. These issues need to be addressed in the future. Legal experts of the STORE&GO project have already examined the regulatory framework of power-to-gas and have come up with suggestions on how to tackle those topics (see Deliverable D7.3 on storeandgo.info).