Anke Hagen, Dr.rer.nat, Dr.tec., Professor at DTU Energy explains why it is important that electricity from renewable sources is stored efficiently and why such capacity is needed in the long-term

The installation of wind turbines and photovoltaics are advancing rapidly in Europe today, realising more and more the large potential for electricity production without the emission of pollutants. This increase in production capacity is needed in the long-term to substitute electricity production from fossil sources, which is on the political agenda worldwide. On one hand, the production profile from wind and solar is fluctuating by nature. The consumption profile, on the other hand, follows a predictable pattern. The result is often a mismatch between electricity production and consumption, which must be balanced. Therefore, efficient, cost competitive, large-scale storage and distribution solutions are needed.

One attractive concept is electrolysis, which uses electricity to produce a storable and distributable gas. Among the electrolysis technologies currently available, solid oxide electrolysis (SOEC) stands out with some particularly attractive features, including:

The concept of electrolysis has gained an increasing amount of attention and is known by the term power-to-x (x being gas, liquids, fuels or chemicals). The interesting benefit, not only from an economic point of view, is that electricity from renewable sources is, therefore, introduced into other sectors such as in the transport and chemical industries, as well in large-scale energy storage.

SOEC is the youngest of the electrolysis technologies, its costs are too high currently and must be reduced. This can be realised through the improvement of the performance of SOEC units and by an increase in the lifetime of the technology. These are two of the main goals of the European project, ECo (Efficient Co-Electrolyser for Efficient Renewable Energy Storage, grant number: 699892). The concept of the ECo project aims to combine electricity and existing gas infra­structure through high-temperature electrolysis to store and distribute green electricity efficiently, and at a large-scale.

The project considers fluctuating electricity input, steam, and CO2 from industrial sources or biogas entering the SOEC. A better understanding has been gained about how SOECs behave under such conditions initially and during long-term operation. Improved SOECs were developed, which allow the operation to take place at a lower temperature of 100 degrees, compared to a state-of-the-art approach without a loss of performance. This achievement can be directly translated into an actual cost reduction because cheaper materials can be used for the system components and SOEC degradation is expected to slow down. The most recent SOEC version from the ECo project integrates the expertise of three European partners into the same SOEC and is, therefore, a resounding success due to the close European collaboration involved. 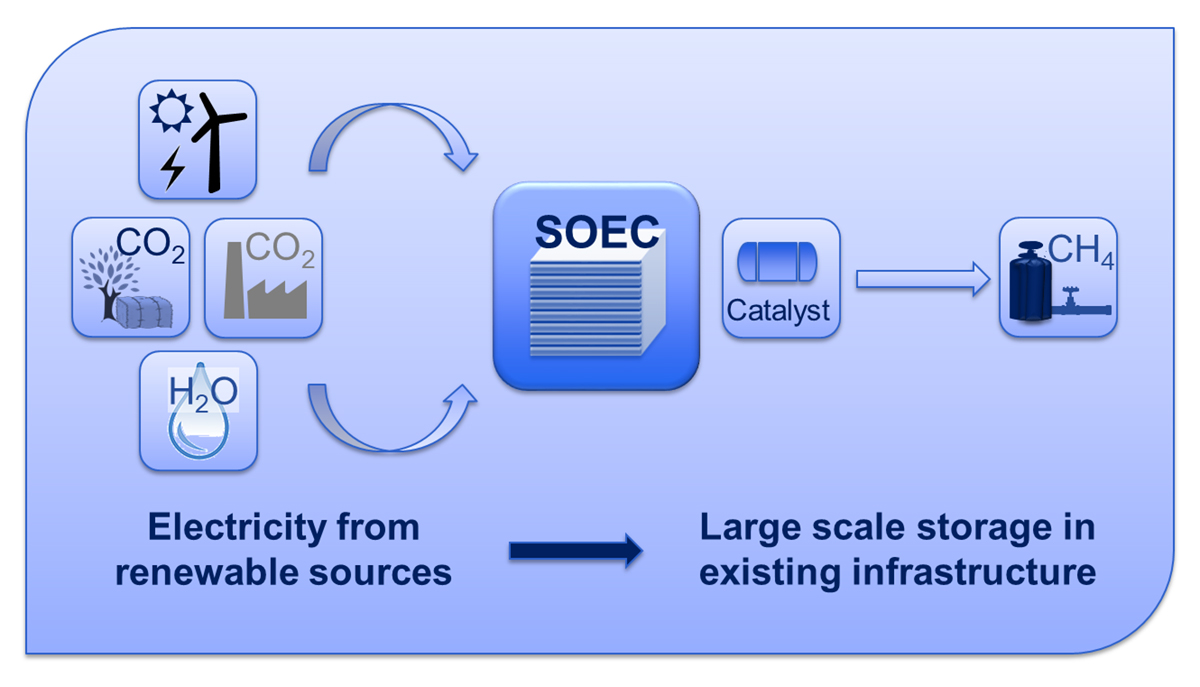 The SOEC process involves a mixture of hydrogen and carbon monoxide – known as synthesis gas. This synthesis gas can be converted into methane through established catalytic converters. If the SOEC is operated at elevated pressures, as also investigated in the ECo project, methane can even be formed directly in the SOEC unit, which decreases the system costs even further.

Methane is a synthetic natural gas or e-gas if formed by using renewable sources. The benefit of producing methane is, that even today, a huge infrastructure exists that can both store and distribute energy with only small losses taking place over large distances, which is much smaller in contrast to long-distance power lines. In fact, today’s European natural gas infrastructure is capable of storing energy corresponding to 50% of the electricity produced from renewable sources. The use of this infrastructure saves the need for costly investments where the storage and distribution of green electricity are concerned.

Apart from technology research, the ECo project also investigates environmental opportunities for combining green electricity, SOEC and e-gas production. It is clear that any new technology must provide benefits in the long-term. For this analysis, specific and realistic application cases were both identified and analysed. One of the input media is CO2. The cement industry and biogas were considered as sources for CO2 – also in a potential future fossil-free energy system. Interestingly, various benefits can be achieved using the co-SOEC approach. It allows, for example, savings of fossil fuel input in a cement plant. Furthermore, integrating co-SOEC in a biomass gasification plant, an increase in the production of synthetic natural gas is achieved.

Certainly, the electricity input is one of the major factors for the SOEC. As such, the electricity mix at a specific location has a large impact on the potential reduction of CO2 emissions through the SOEC concept as pursued in the ECo project. This potential is already present today in specific places, such as in countries with a high share of electricity production from renewable sources and it will increase even more in the future, with more green electricity installed.

This is a project sponsored by the European Commission