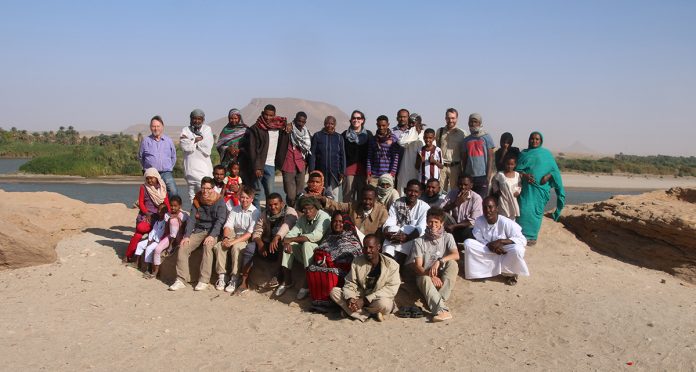 Excavations and 3D reconstructions on Sai Island provide a glimpse into the history and culture of an Ancient Egyptian settlement, says Professor Julia Budka

The international age of the New Kingdom in Pharaonic Egypt (c. 1539-1077 BCE) resulted in the foundation of several Egyptian towns and settlements in the area known today as Upper Nubia in Sudan. Some of these are well preserved and offer the unique chance to explore domestic life in an ancient Egyptian settlement outside of Egypt proper. The most promising example of such “colonial sites” is the exceptionally well preserved town on Sai Island because of its long occupation period and its attested history as important site of the African Kingdom of Kerma. Prior to the New Kingdom, Sai was the northernmost stronghold of the Kerma Kingdom with a significant strategic role, well attested by archaeological remains.

The ERC AcrossBorders project has conducted archaeological fieldwork on Sai Island from 2013 until 2017. Archaeological excavations in the New Kingdom town and cemetery were complemented with kite aerial photography, structure from motion approaches, terrestrial 3D laser scans, geoarchaeological surveys, micormorphological soil sampling and various archaeometric analyses of diverse materials. Human remains, animal bones, botanical material, soil, plaster, sandstone and all kinds of objects are currently being assessed under the general question: Can Sai be evaluated as an Egyptian microcosm, despite its location outside of Egypt and its specific topographical, environmental and cultural situation? How did the local Kerma Nubians react to foreign influences and how did the Egyptians present themselves outside of Egypt?

The town layout has been pieced together

The recent 2017 field season on Sai Island provided some answers to these general research questions, especially by new insights on the layout and function of the New Kingdom town. At sector SAV1 West, an early occupation phase, predating the town enclosure, was confirmed – supporting the reconstruction of an early Egyptian landing place on the island founded at the beginning of the New Kingdom, a period when the Kerma Kingdom was still the major rival to Pharaonic Egypt. Some new mud brick buildings of modest scale and irregular outline were excavated, providing additional data for the city map. In this respect, sector SAV1 East proofed to be highly relevant. This area yielded new material for understanding the function of the town. Large subterranean storage rooms were unearthed in rooms with schist floors, stressing the role of Sai as Egyptian administrative center. The new cellars and rooms are comparable to the southern sector of the town, excavated by a French Mission in the 1970s, and are probably related to the Egyptian stone temple close by. With our new fieldwork, the town map can be updated and fresh remarks on the internal structure are possible. Although Sai was definitely a planned Egyptian town with an orthogonal layout, AcrossBorders excavations have illustrated that within the city there are several different sectors that contrast regarding their layout. Theoretical urban planning may differ significantly from real developments within Egyptian towns like Sai – especially since the past occupants represent a potentially dynamic factor, in particular, if they include both Egyptians and Nubians as it is the case for Sai.

Within settlement archaeology, occupants of ancient sites may be tentatively traced by material evidence. One of the primary goals of the AcrossBorders project is reconstructing life during the New Kingdom on Sai according to the architecture and finds. For this task, the most numerous finds to be considered are thousands of potsherds. Such ceramic vessels attest to the use and function of sites and individual buildings and can also provide information on the occupants. In this respect it is remarkable that, from the earliest strata onwards, Nubian ceramics appear at Sai side by side with imported Egyptian wares and locally wheel-made products. Since the Nubian pots are the minority, it seems safe to assume that the Egyptian style town was initially occupied by Egyptians. However, the production of hybrid pottery types illustrates that Egyptians and Nubians lived and worked side by side, combining aspects of both cultures. Although it comes as no surprise that Egyptian representation is dominant within a colonial site like Sai, a local substratum is traceable as well. The pottery attests to individuals who identified themselves primarily as Egyptian officials and occupants of an Egyptian site, but may nevertheless have had family ties in Nubia and derive from a local group whose specific cultural identity was never completely abandoned, resulting in a very dynamic world in New Kingdom Sai.

Currently busy with post-excavation work, the AcrossBorders project conducts a detailed assessment of architecture and material culture embedded in the environmental settings and landscape. The ongoing analysis will result in the reconstruction of aspects of daily life on a regional level, but will also include new information about the historical context of Egyptian towns set up in Nubia, thus combining research questions on the micro-level with the macro-level.