Reboot Digital Agency analysed the latest findings from the Institute of Business Ethics, who surveyed 764 UK employees to see if they had compromised their organisation’s standards of ethical behaviour and if so, what were the ‘pressures’ that pushed them to do so

Much of the corporate world tends to be driven by a desire for instantaneous results which produce favourable financial returns. Consequently, the principles of ethics in a range of actions and decisions can often end up taking a back seat. Organisation’s which do not implement the fundamental pillars of ethics (honesty, integrity, fairness and transparency) within their practices and operations – will undoubtedly run into a magnitude of problems and potentially devastatingly scandals.

Ethics apply to all types of organisation’s and cover the running of various areas/aspects of a business, including to those individuals who work for them. When employees violate ethics in an organisation, they can vary between minor (e.g. using company petrol for personal mileage, stealing office supplies, taking a ‘sick day’ when not ill etc.) and serious offences (e.g. bullying, fraud, discrimination, misreporting of hours worked etc.) of misconduct. 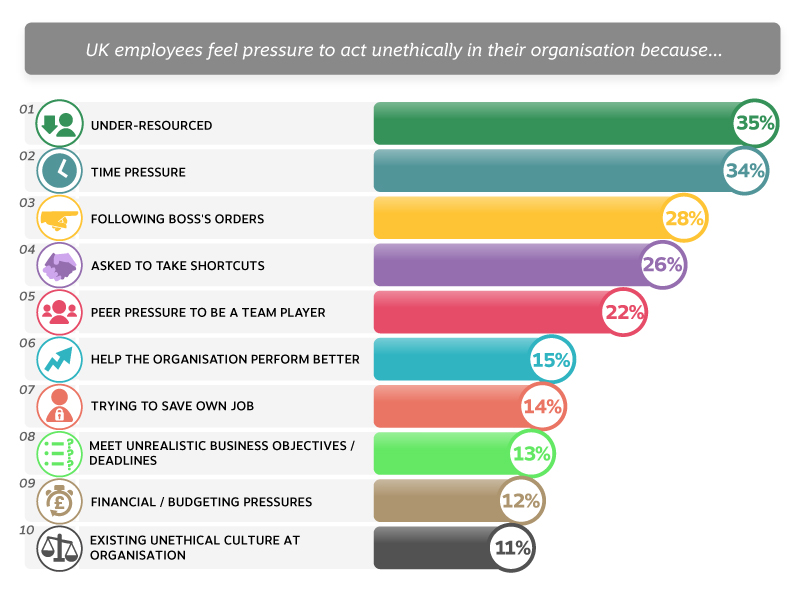 Reboot Digital Agency astonishingly discovered that from the 764 UK employees surveyed, 12% have broken their current organisation’s standards of ethical behaviour. Out of the 12%, Reboot Digital sought to identify the main pressures which influenced staff members to stray away from their company’s code on ethics.

Reboot found that an organisation being under-resourced is the biggest factor which influenced employees to act unethically in their workplace at 35%. Thereafter, 34% of employees have committed to taking unethical actions and decisions due to the time-pressures that have been placed upon them to complete and deliver on their work (e.g. reports, general tasks, projects, presentations etc.).

Interestingly, 28% admitted to breaking their organisation’s values on ethical behaviour because they were following their boss’s orders. Similarly, 26% broke moral grounds as they were asked to take shortcuts from other individuals (e.g. fellow colleagues).

On the other end, the motive for 11% of workers for being immoral stemmed from them viewing their company’s culture as one that is already unethical. Just slightly above, 12% deviated from their organisation’s criteria on ethical behaviour as a direct consequence of financial/budgeting pressures. 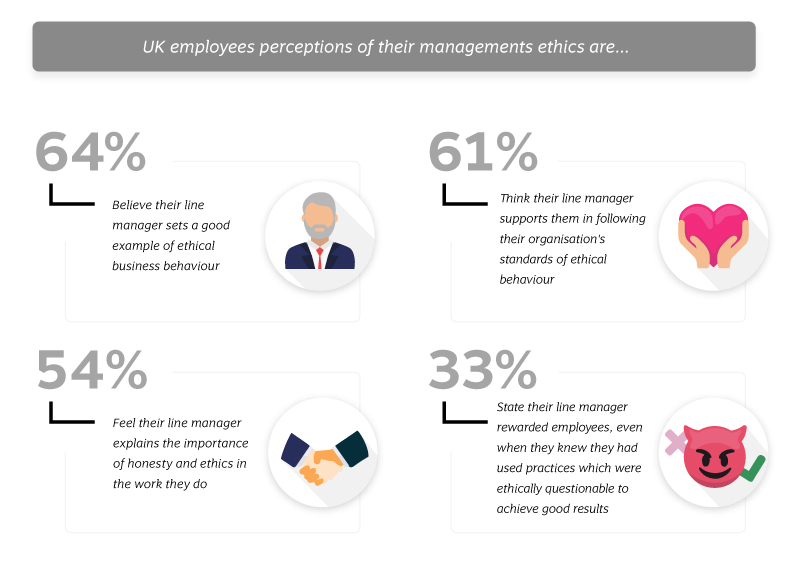 Further on, Reboot Digital Agency sought to find out the 764 employee’s perceptions on how senior figures are performing when it comes to providing them guidance on the conduct of ethical and acceptable behaviour established by the organisation they work for.

Worryingly, 33% revealed their line manager rewarded employees, even when they knew they had used practices which were ethically questionable to achieve good results. This statistic echo’s that from renowned accountancy firm ‘Ernst & Young’, whose own research showed that 42% of UK employees feel their senior management would act in an unethical manner to help a business survive.

Shai Aharony, Managing Director of Reboot Digital Agency commented: “Ethics provide businesses with guiding values and principles by which they can operate in a moral and accountable manner. Ideally, organisations and their employees should be abiding by them in everything they do. But in the backdrop of a challenging and uncertain economic climate, this has become less and less the case.

“Colossal economic events such as Brexit are only adding to workers existing pressures and creating new ones. This in turn is causing workers to take unethical shortcuts in their duties and obligations. These occurrences are unfortunate, but I believe senior management have a significant role to play in controlling the expectations they create for their employees. Depending on their role, making sure objectives for each employee are realistic. That way, employees won’t feel the pressure nor urge to take any unethical actions and decisions to achieve them”.