Alexandra Koroleva, 65, head of Ekozaschita! (Ecodefence!), one of Russia’s oldest environmental groups, is seeking asylum in Germany because in Russia, among other things, she could be imprisoned for two years for being held criminally liable for unpaid fines levied against Ekozaschita! under the abusive law.

Koroleva’s group refused to register under the 2012 law that requires any Russian group accepting foreign funding and carrying out activities deemed to be “political” to register as a foreign agent, a term that in Russia implies “spy” or “traitor.” However, in 2014, the Justice Ministry forcibly added Ekozaschita! to the “foreign agents” registry. The group and its supporters believe the move was a reaction to their campaign against the construction of a nuclear plant in the Kaliningrad region, where the group is based. The government should drop the cases against Koroleva.

“Instead of celebrating Koroleva’s lifelong commitment to environmental activism, Russian authorities have forced her into exile,” said Damelya Aitkhozhina, Russia researcher at Human Rights Watch. “The cases against Koroleva should be dropped, and Russia should repeal its ‘foreign agents’ law once and for all.”

Human Rights Watch and multiple other human rights organisations and bodies have repeatedly condemned the Law on Foreign Agents as a violation of human rights norms and called for its repeal. Ekozaschita!/Ecodefence! and 48 other Russian nongovernmental organisations (NGOs) have applications pending before the European Court of Human Rights (application no. 9988/13) arguing that the Law on Foreign Agents violates several human rights norms including on freedom of expression and association, a conclusion endorsed by the Council of Europe’s Commissioner for Human Rights.

Although, as a matter of principle, Ekozaschita! did not comply with the reporting requirements in the “foreign agents” law, it continued to file all other reports required of civil society organisations by authorities in a timely manner. In May 2019, the Federal Court Bailiff Service opened five criminal cases against Koroleva for unpaid fines. Information about the cases was only made public in recent days.

Between 2016 and 2018, both Ekozaschita! and Koroleva in her personal capacity were fined on numerous occasions for failure to submit the reports under the “foreign agents” law and for refusal to publicly identify the group as a “foreign agent” organisation.

The Federal Bailiff Service referred five unpaid fines for enforcement proceedings after the payment deadlines had expired. The fines range between 10,000 and 100,000 rubles (approx. US$150 and US$1,500), and the enforcement proceedings entailed an additional 10,000 rubles per case. The total amount of fines against Koroleva and Ekozaschita! deemed overdue or due by Russian authorities is about US$18,000. Koroleva’s colleagues are trying to raise the money on several crowdfunding platforms in the hopes that paying the fines will prevent Koroleva’s conviction.

In December 2018, Russian authorities froze Ekozaschita!’s bank accounts – as they had the power to do under the court decision execution proceedings -, leaving it unable to make any payments and effectively blocking its activities. In March, after the group found out about the fines, Ekozaschita!’s lawyer filed an application for the group’s liquidation, but the Justice Ministry refused to register it. Ekozaschita! is planning to go to court to contest the refusal, their lawyer said.

The Justice Ministry has initiated liquidation proceedings against several nongovernmental groups that it forcibly registered as foreign agents, including such prominent groups as Golos, an election watchdog, and Agora, a human rights litigation group. More than 30 organisations have shut down rather than accept the false and stigmatising label of “foreign agent.”

Currently, the Justice Ministry’s registry of “foreign agents” includes 75 organisations. Under the law, offenses such as refusal to declare and register one’s organisation as “foreign agent”, to submit reports as “foreign agents,” or to put a “foreign agent” marker on all publications, websites, and even staff business cards are punishable by fines of up to 500,000 rubles (approx. US$8,000); and there is no limit on the number of fines an organization can be ordered to pay. In November 2017, Human Rights Watch published a report documenting how the law has been used to silence some of the country’s most effective, rigorous, and committed environmental groups.

In June 2016, authorities in the Rostov region brought criminal proceedings against Valentina Cherevatenko, a prominent rights activist, for “malicious evasion” of the “foreign agents” law, but dropped the case a year later. Her case had been the only example of attempted criminal prosecution of an organisation’s leader under the “foreign agents” law until the authorities targeted Koroleva.

“The cases against Koroleva are meant to punish her and her environmental group at a time when environmental activism and protests in Russia are on the rise,” Aitkhozhina said. “But the message the authorities want to send through the ‘foreign agents’ law is broader—that any organisation that engages in activism in Russia does so at its own peril.”

The political barriers holding back progress on reducing transport emissions 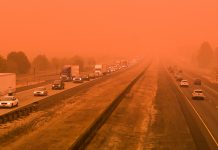 What is causing the raging wildfires in Oregon, California and Washington?