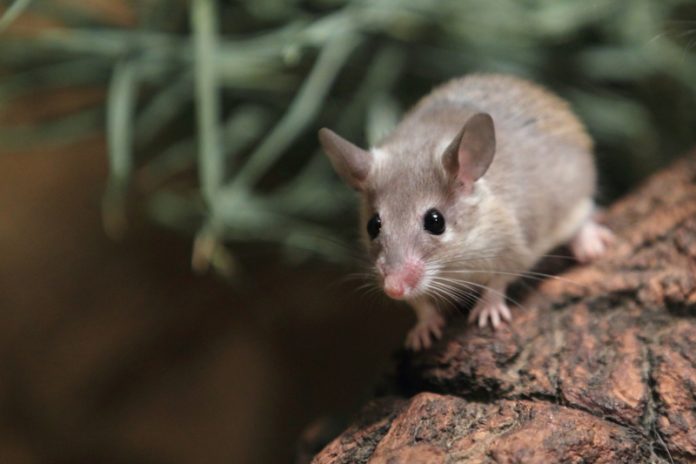 If you ask most people whether mammals can regenerate or not they would surely answer no. After all, many people have scars on their skin from wounds, burns or surgery, amputated limbs do not regenerate, tumour removal leaves large tissue defects and many people die from the fibrosis resulting from a heart attack. But if you scour the scientific literature for regenerative ability in mammals there seems to be quite a number of diverse reports. The annual replacement of deer antlers is surely one of the most conspicuous examples of regeneration and shows many features typical of complex tissue regeneration, such as limbs in lower vertebrates including the formation of a blastema (see The Champion of Regenerative medicine – the Axolotl).

The digit tips of children, mice, rats and monkeys also regenerate by the formation of a blastema. Holes punched through the ears of rabbits, cows, pigs, chinchillas, pikas, hares and bats are said to regenerate so this includes cartilage in the middle of the ear and skin over the top. Most impressively for a mammal, new-born mice can regenerate cardiomyocytes following a myocardial infarction, although this ability is lost by seven days after birth.

And of course, the mammalian liver regenerates (as the ancient Greeks in the legend of Prometheus knew), not by the formation of a blastema, but by a process known as compensatory hypertrophy, such that if a lobe of the liver is removed the remaining liver lobes grow and expand to replace the lost function. This process involves the coordinated up-regulation of cytokine, growth factor and metabolic networks resembling true regeneration. Similarly, the lung can undergo compensatory hypertrophy after the removal of one or more of the lobes, in exactly the same manner as the liver.

Although tantalising, these regenerative abilities are too sporadic to provide us with a new model of mammalian regeneration which we clearly need for regeneration studies so that direct comparisons between the damaged organs (e.g. the skin or the heart) of an adult regenerating mammal and an adult non-regenerating organ (e.g. the lab mouse or human) can be made. We need these directly equivalent comparisons to eliminate differences due to developmental age or evolutionary distance to identify the molecules that are causing scarring and fibrosis in the typical mammal and may not be present in a regenerating mammal. We would then want to counteract these fibrotic molecules in a human with the intention of inducing regeneration and/or preventing scarring. 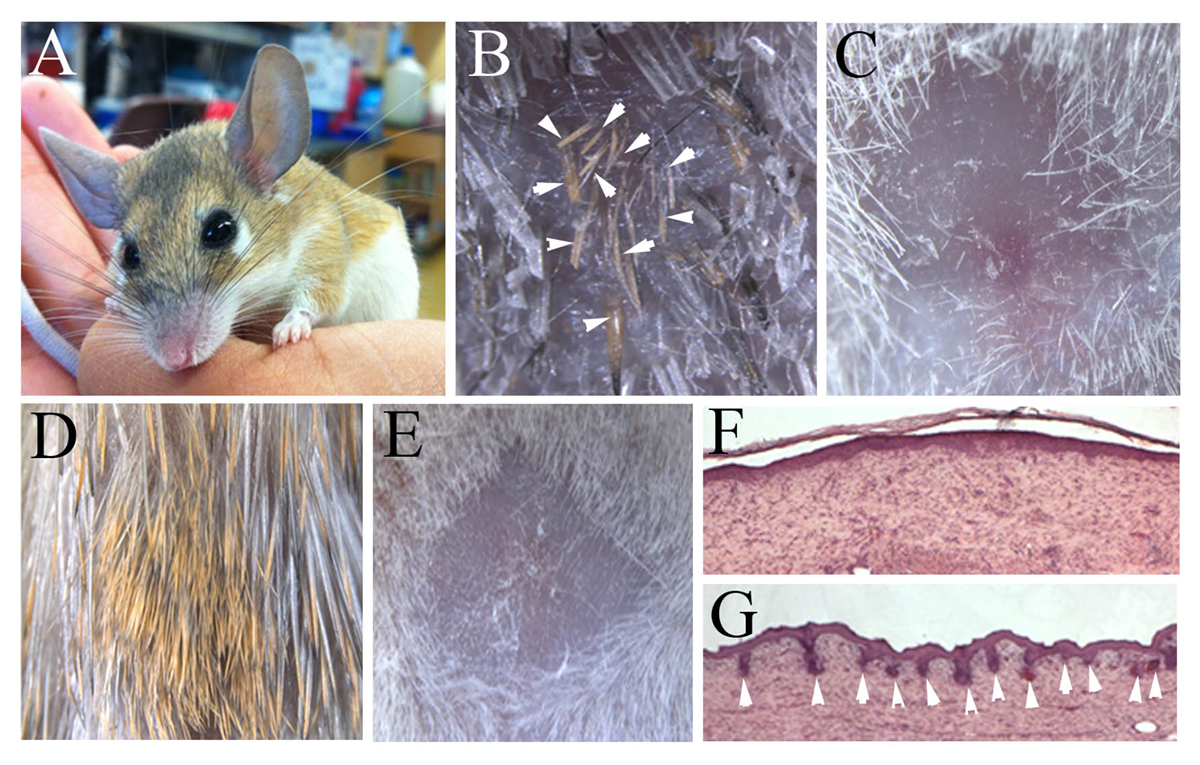 Excitingly, it now appears that we may have discovered an adult mammal which can regenerate many organs, namely the spiny mouse of the genus Acomys (Fig. 1A). There are several species of these mice which inhabit desert areas in North Africa, the eastern Mediterranean and southwards into Kenya. Along with several colleagues (Ashley Seifert, Megan Seifert, Jake Goheen) we found that these species could frequently be trapped with large segments of skin missing from their backs and when these animals were kept the wounds regenerated perfectly and replaced the hairs, sebaceous glands, erector pili muscles of the hairs and the dermis without scarring (Fig. 1B). 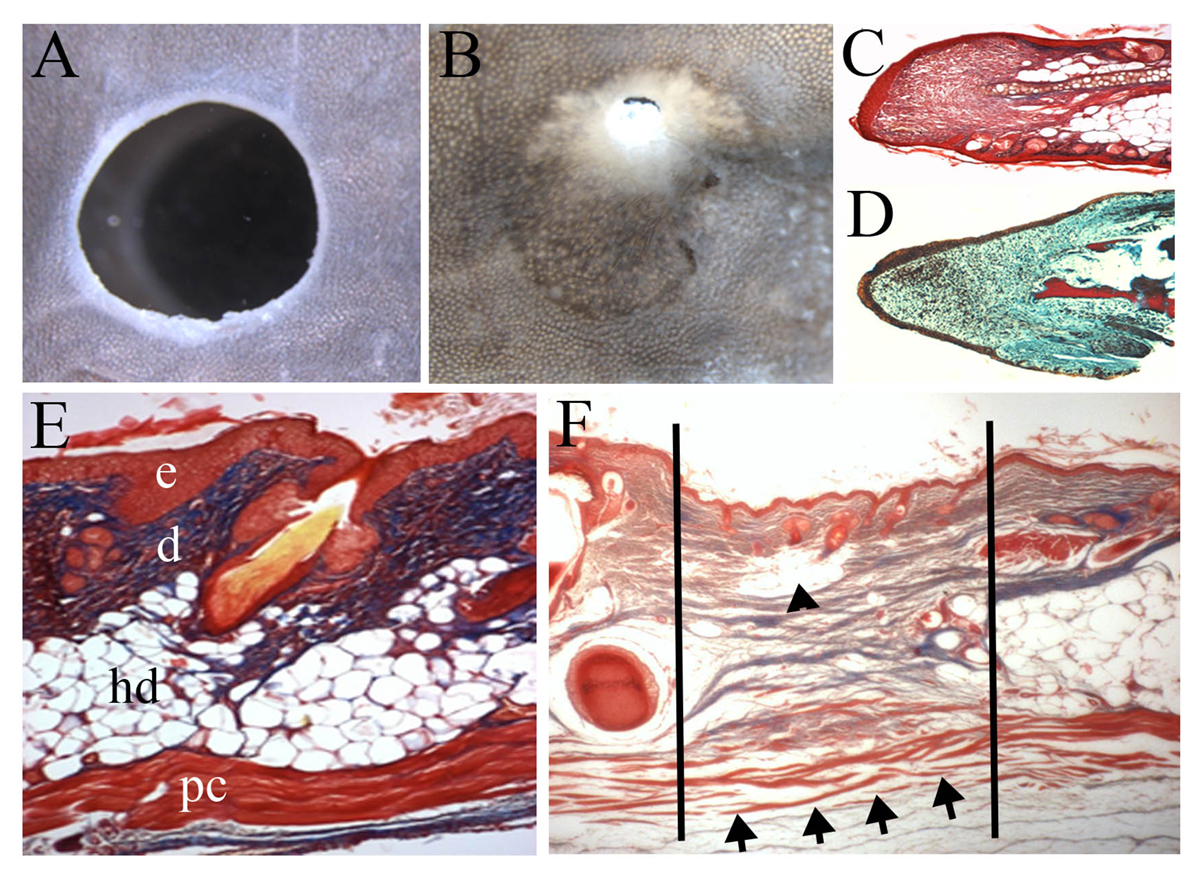 In contrast, a similar wound in the lab mouse produces a scar covered by a hairless, glassy wound epithelium (Fig. 1C) just as humans do. In further skin experiments using full thickness thermal injuries rather than a physical wound, the Acomys skin regenerates perfectly with a full complement of hairs and no scar (Fig. 1D), whereas the lab mouse produces a hairless scar (Fig. 1E). Histologically these repairing skin tissues look remarkably similar in terms of the dermis. A section of Mus dermis four weeks after a burn injury is shown in Fig. 1F covered by a uniform epithelium.

In contrast, a regenerated Acomys burn injury at the same time point is shown in Fig. 1G and many regenerating hair follicles spread across the wound epithelium can be clearly seen. However, there are molecular differences in the dermis of the regenerating and scarring dermis in terms of the collagens and other extracellular matrix molecules that are deposited, which may play an important role.

In the same series of experiments, we also showed that large 4mm holes punched through the Acomys ear could regenerate completely, replacing not only the skin but also the cartilage in the middle of the ear (Fig. 2A, B). This process of ear punch regeneration involves the formation of a blastema (Fig. 2C) which shows a remarkable similarity to the blastema of the regenerating amphibian limb (Fig. 2D and The Champion of Regenerative medicine – the Axolotl). This shows the truly epimorphic nature of this mammalian regenerative event. Hyperlink: www.openaccessgovernment.org/champion-regenerative-medicine-axolotl/40526/

An even more surprising result was seen in these skin regeneration studies because unlike the human skin, the rodent skin has a layer of skeletal muscle at the base called the panniculus carnosus (Fig. 2E). Normally, skeletal muscle cannot regenerate in mammals when a hole is made through the tissue. This is known as a volumetric muscle loss and frequently occurs after injuries such as gunshot wounds. But when the spiny mouse skin regenerates the missing segment of the panniculus carnosus regenerates as well (Fig. 2F). This is a very exciting result and may lead to discoveries in how to regenerate missing muscle segments in humans.

In addition to the skin, the ear and skeletal muscle the Acomys heart also shows regenerative properties. In the lab mouse and humans after a myocardial infarction the damage immediately causes a huge drop in the ability of the ventricle to pump blood, known as the ejection fraction from which it does not recover. Heart cells at the site of the ischemia die and local fibroblasts proliferate and lay down a scar.

The reduced ejection fraction induces the ventricle to pump more blood and as a result, the ventricle wall thins dramatically. In adult Acomys, however, the immediately decreased ejection fraction caused by the myocardial infarction recovers over a period of 14 days to return to pre-MI levels. The missing capillaries are regenerated and there is a vastly reduced level of scarring. Future studies will be aimed at determining whether heart cells can divide and replace the ischemic tissue.

Our studies to date on the regenerative properties of the adult Acomys skin, skeletal muscle, ear and heart have revealed a striking lack of fibrosis in each tissue at the site of damage and this allows the natural regenerative abilities of cells and tissues to take place unhindered. We suggest that Acomys is a great candidate for an adult mammalian regeneration model for use in regenerative medicine with the ultimate aim of discovering why this genus can regenerate and extrapolating this knowledge to generate therapies for the benefit of humans.