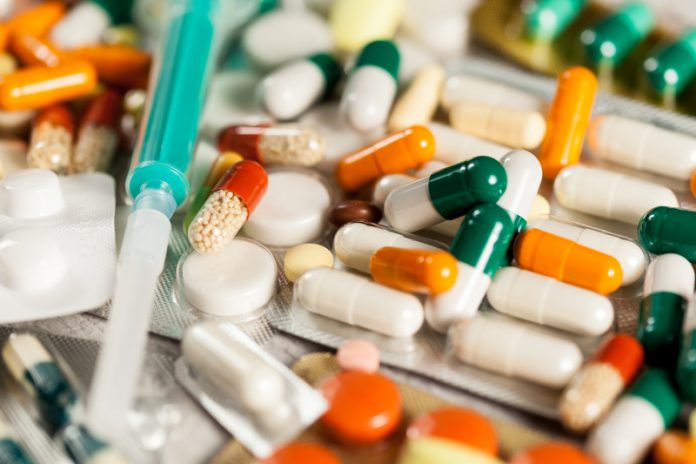 As I write, the news has come through that our partner company, MGB Biopharma, has raised the necessary funds to carry out a Phase IIa clinical trial on our front-runner antibiotic, MGB-BP-3, for the treatment of Clostridium difficile associated diseases.

This compound designed and then synthesised at the University of Strathclyde on a scale of a few milligrammes ten years ago is now manufactured and formulated for human studies on a kilogramme scale. It is one of a family of compounds from our laboratories that bind to the minor groove of DNA, hence the shorthand MGB; we refer to our compounds as S-MGBs for Strathclyde Minor Groove Binders.

In our initial academic studies, we were able to reach proof of concept for the antibacterial action of MGB-BP-3 against Gram-positive bacteria in mouse models of disease with the help of Professor Curtis Gemmell, then at the University of Glasgow and Glasgow Royal Infirmary. That’s about as far as one can reasonably expect to go in an exploratory research funded project based in university laboratories. The human and experimental resources and the necessary funds to support them are just not there in the normal academic environment.

That things have reached phase IIa is largely due to the determination and tenacity of our MGB Biopharma led by Dr Miroslav Ravic. MGB Biopharma has used a research and development model in which the company acts as the focus and management of the programme with a team of advisors, but the experimental work is carried out by trusted contract research organisations (CRO).

In this way, the infrastructure and employment costs associated with pharmaceutical development are avoided. Most of the time this way of working has led to good data in good time although there have been hiccups. The biggest challenge has been continuity of funding which is why the news that a phase II trial can begin is particularly significant. The phase I trial showed that MGB-BP-3 behaved exactly as expected in the healthy volunteer subjects: it was safe, non-absorbed (good for a C. difficile treatment) and killed only the Gram-positive bacteria of the gut flora.

In phase IIa, MGB-BP-3 meets patients for the first time. The qualitative data from the trial will provide the first evidence of how good a drug MGB-BP-3 might actually be in treating a real disease. This is a very big step on the way to market. Of course, as the title of this piece implies, there are many steps still to come and we must be patient and take each step-in turn.

MGB-BP-3 is a very important project for us at the University of Strathclyde. It has shown, through the partnership with MGB Biopharma, that the S-MGB class of compound can be manufactured and dosed successfully, outcomes that support the development of other S-MGBs for other applications.

In principle, S-MGBs can be used to treat many infectious diseases and we’ve worked with collaborators around the world to evaluate our compounds. We have identified compounds from our collections with profiles suited to the treatment of malaria and tuberculosis, for example, with the help respectively of partners in Australia and South Africa. However, the most promising are for antitrypanosomal and antifungal treatments; interestingly, similar compounds are of interest for each application, which may indicate some common features of their biology.

In the case of antitrypanosomal activity, the disease in question is African Animal Trypanosomiasis (AAT) and its South American relative, Chagas disease. For these, we have a number of very active S-MGBs, significantly different from MGB-BP3, that are capable of curing trypanosomiasis in mouse models of the disease. This brings us to the equivalent stage that MGB-BP-3 was before our partnership with MGB Biopharma began; we are now looking at the profiles of the most active compounds to decide whether they are suitable to propose for further development funding. Not only have our academic colleagues at the University of Glasgow, led by Professor Mike Barrett, shown that S-MGBs are active in vivo, they are also making progress in understanding their mechanism of action. The project website explains more.

Most recently we have started to work with Dr Mike Bromley at the University of Manchester on antifungal activity. He has already shown that our collection of S-MGBs contains some significant compounds. One is notable because of its broad spectrum of activity and another is especially active against Aspergillus fumigatus, which is a serious pathogen for immunocompromised patients typically leading to invasive pulmonary aspergillosis. Particularly interesting is that S-MGBs show the potential to be treatments for a new fungal pathogen, Candida auris, that was first identified in Japan in 2009 and by 2017 had spread to Europe and the Americas. This fungus is characterised by multidrug resistance and therefore our S-MGBs, that operate by a new mechanism of action, could become really important.

Of course, all of these opportunities exist because of the remarkable flexibility of heterocyclic chemistry, which is my core field of experimental chemistry and the molecular basis of a very large proportion of modern medicines as I have described in detail before.

It is remarkable that the small S-MGB project begun in a university laboratory should have matured into one with such global significance and potential. There are a lot of dedicated and committed scientists around the world who have worked with us on the greater MGB project, each contributing to the individual small steps of the title.

Together we have shown what might be possible to defend the world against multi-drug resistant infectious pathogens in humans and animals using S-MGBs. We now need to take some big steps to bring these possibilities to reality and this will need the collaboration of strong commercial organisations.