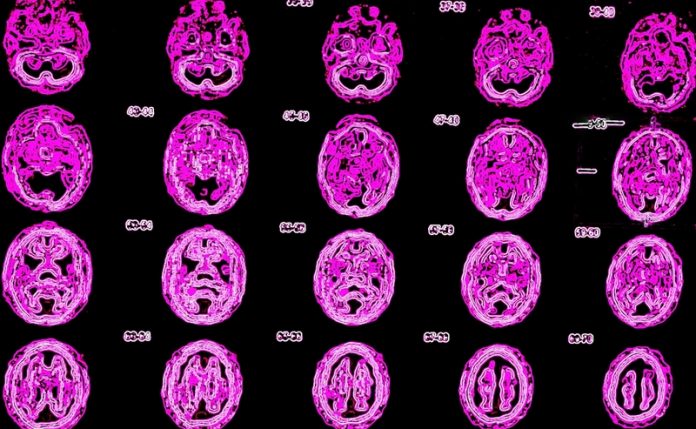 Prof. Dr Axel Rominger from the Ludwig-Maximilian-University of Munich on how neurodegenerative diseases can be studied through PET imaging

With its exponentially increasing incidence as a function of age, Alzheimer’s disease (AD) has become the most common form of dementia and is thus imposing an onerous burden on health care systems of societies with ageing populations.

The disease is histopathologically characterised by the presence of cerebral protein depositions, notably intracellular neurofibrillary tangles and parenchymal β-amyloid plaques. The principal component of amyloid plaques, the amyloid β-peptide (Aβ), is a heterogeneous cleavage product of the β-amyloid precursor protein (APP) generated by the successive actions of β- and γ-secretases.

Of the several Aβ variants, the Aβ42 species is widely believed to be a key factor in the disease. Current therapeutic options for AD include acetylcholinesterase inhibitors and NMDA receptor antagonists, both of which provide some transient amelioration of cognitive symptoms, but without any disease-modifying effects. Consequently, there is an urgent need for disease-modifying treatments such as those targeting amyloidosis or tau depositions.

In addition to these depositions, further pathological changes occur in the AD brain, especially involving neuroinflammatory processes. Microglia, the resident macrophages in the brain, are activated in response to pathogens (e.g. tau, β-amyloid, or white matter damage) and mediate the clearance of toxic protein aggregates and cell debris.

However, chronic microglia activation may lead to increased neurodegeneration by feed-forward mechanisms promoting further toxic protein deposition; as such, microglia presents another important potential therapeutic target. The causal relationship and detailed interactions of the different disease mechanisms of AD are however not fully understood yet.

PET imaging allows the non-invasive investigation of molecular alterations in living brain. With the advent of novel molecular imaging markers (radiotracers) targeting specific pathological hallmarks of the disease, new options have arisen for monitoring neurodegenerative disease processes. The repertoire of available tracers now enables to map microglia activation along with primary pathologies such as β-amyloid and tau depositions. PET methods can be applied translationally, both in transgenic animal models and in humans. 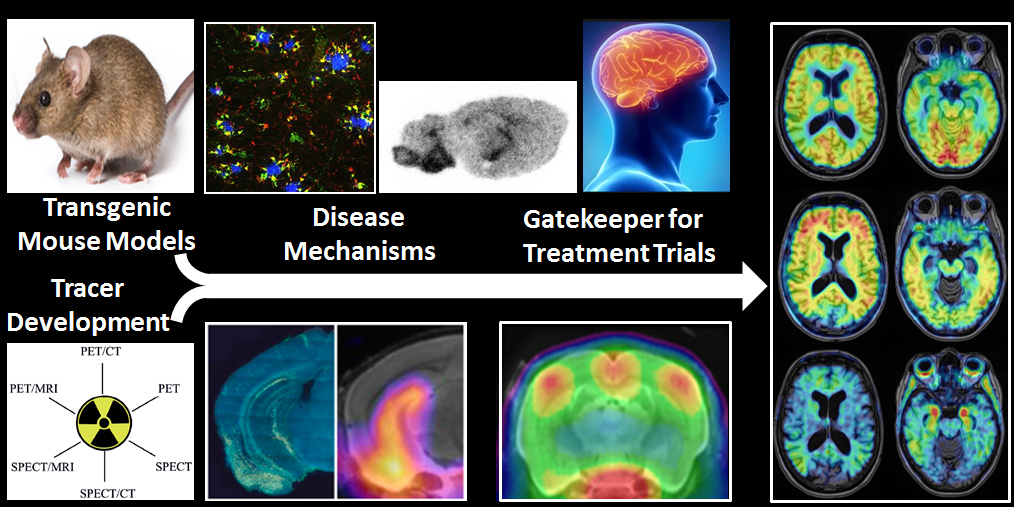 In clinical AD trials, investigating disease-modifying agents, molecular imaging confirms the baseline state and progression of pathology markers, and thus serves as a gatekeeper for including patients into clinical trials, e.g. EMERGE/ENGAGE study (clinical trials identifier: NCT02484547) or the A4-Trial (NCT02008357). Studies following individual cases with confirmed baseline pathology are superior to earlier approaches, where inclusion was based solely on clinical evaluation. PET studies of longitudinal design can then monitor the disease course as well as drug efficacy, with respect to objective pathological markers.

In the preclinical setting, there have emerged numerous transgenic AD mouse models expressing different hallmarks of the disease, which can be studied with respect to pathophysiology as well as from a therapeutic standpoint. In both respects, these models can be used to assess the effectiveness of novel treatment options on specific markers of AD disease progression.

Longitudinal investigations in living transgenic animals can be cross-correlated with terminal immunohistochemical and biochemical assessments, which constitute in vitro methods. This hybrid approach with serial microPET assessment throughout the course of a long-term treatment protocol in conjunction with histo­pathological and biochemical end-point analyses is inherently superior to conventional experimental paradigms, in which only the end-point readouts are obtained. Given the well-known inter-animal variability observed in transgenic mouse studies, parallel microPET monitoring during treatment as well as normalisation of results to individual baseline microPET findings informs the interpretation of biochemical findings at the studies’ conclusion.

In an ongoing preclinical research project, we are currently investigating microglial activation in relation with abnormal protein deposition in different transgenic β-amyloid and tau mouse models, along with complementary behavioural/cognitive assessment using the Morris-Water- and Y-Mazes. After completion of the longitudinal PET/behavioural study, we shall confirm pathology by histopathological and biochemical assessments.

In the second stage of this project, we shall test the efficacy of acute and chronic immunomodulatory therapeutics on the progression of β-amyloid- and tau-load in the AD mice, emphasising the predictive value of the neuroinflammation-PET on the effects of immunomodulation on the cognitive testing and in vitro histopathological outcomes.

In the final stage, we shall test the effect of an anti-β-amyloid vaccination on the neuroinflammatory response, and on the progression of amyloidopathy and impaired cognitive performance in AD mice. Given that anti-β-amyloid vaccines have already entered human trials, we are convinced of the translation relevance of the current project.

These preclinical projects are performed in collaboration with the German Center of Neurodegenerative Diseases, Biomedical Center (Head: Professor Christian Haass) and the Neuropathological Department (Head: Professor Jochen Herms), and are funded in part by the SyNergy Cluster with further support from industry partners. Further support comes from the Deutsche Forschungsgemeinschaft (Grant no. 348312276).