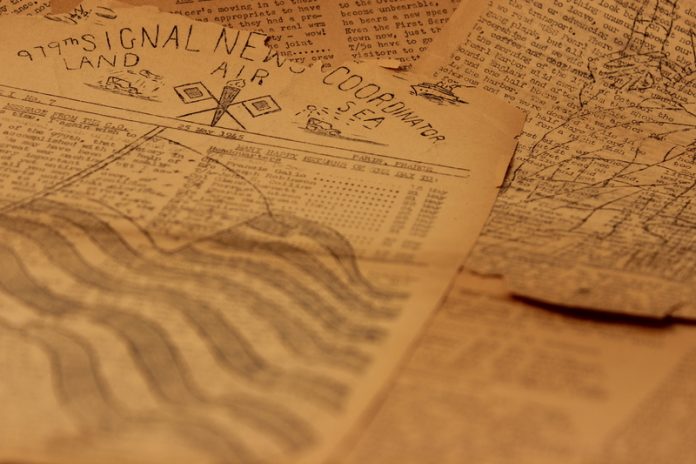 Newspapers can help us understand life in America, the country’s history and democratic process. For decades, newspapers have been the primary resource for sharing information in local communities and to learn about both regional and national events. In addition, historic newspapers provide a populist perspective of events, which can be key to understanding the cultural context of the time.

To enhance access to this material, Library of Congress and the U.S. National Endowment for the Humanities decided to create The National Digital Newspaper Program (NDNP) in 2004, with repositories around the country to develop the resource of historic American newspapers. NDNP provides both funding and guidance for representative and state institutions to select and digitise historic newspapers from their own collections, which can be distributed through Chronicling America (chroniclingamerica.loc.gov), an online digital resource at Library of Congress.

Program manager Deborah Thomas explains that free and open access to American newspapers is given through the NDNP. She says that Library of Congress provides access to the digitised versions of the newspapers, as well as digital information about newspapers (U.S. Newspaper Directory, 1690-Present). She tells us more about the scope of the NDNP’s work in her own words, as the interview kicks off.

“The first newspaper published in America was during 1690 in Boston, and while we don’t have the actual digital copy online at this point, we do have information about it online.

“We currently have digital content from 1789-1943 and Library of Congress has the potential to add content from 1690-1963, after which US copyright law regulations changed. All the materials on the website today are in the public domain.”

The conversation then moves to how the NDNP builds on the legacy of the strategically successful United States Newspaper Program (USNP), which ran from 1982-2011.

“NDNP was the first national program to address the use of American newspapers as archival material, beyond the individual library collections. The National Endowment for the Humanities and Library of Congress got together in the 1980’s and developed a sponsored program in each state and territory.

“The aim was to identify and centrally describe newspapers from across the US and selectively microfilm the most at-risk material, so along the way, the USNP developed several standards, archival descriptions of newspapers and microfilming practices. For the first time, the approach of newspaper libraries to archival materials was standardised.”

Life in America adapting to digitalisation

When this program began to wind down, the National Endowment for the Humanities and Library of Congress looked at what it had accomplished and spotted a rising tide of both digitisation and technology. Thomas says that The National Digital Newspaper Program (NDNP) has benefitted from the networks that were established during the time of the USNP program.

“Concerning NDNP, we reused and enhanced descriptive information, standardised data and microfilm that was created during the life of USNP. The digitisation of newspapers in the current program generally comes from the microfilm copies, because that is the most common format available. The newspapers were preserved on microfilm for preservation reasons.”

Thomas then tells us her thoughts on championing digitisation, both on a national and local level. This could benefit those in school, the local library or even at home Thomas enthuses, before developing this fascinating point further.

“Digitization of newspapers, in particular, gives people access to the views of American society over time, a window into what people thought and did and how they reacted to the events of the day in ways much more accessible than individual reels of microfilm, residing in distributed locations around the country.

“Having ready access to this kind of material provides new points of access through digital technologies – and different views into data that can provide a new perspective on history – in ways that books and biographies may not. Newspapers are important, particularly at a national and local level, indeed every small town in America has its own newspaper. These include the views and narratives of not only major historical figures and events, but also individual voices and elements of life in terms of social news, humour and editorial perspectives.

“Newspapers are therefore key to discovering American history and are usually very well used in most library collections. Putting digital technology to work to make that content broadly accessible has a powerful effect on distributing the content – and it also provides a rich ground for research and analysis in terms of American history.”

So, technology has really impacted and changed the way we access information and how libraries and museums are addressing these changes as well as embracing them. Thomas underlines that the way technology has impacted upon distribution methods is nothing but epic, with the ability to endlessly replicate newspapers and with the advent of the Internet to distribute them almost instantly. Thomas is keen to tell us more on this absorbing point in her own words.

“We not only have access to huge amounts of information anywhere in the world, but we also have access to many different views and sources for that. Libraries and museums are both invigorated and challenged by these changes because the newspapers can reach so much more people than they could previously. We are challenged by these opportunities because our essential purpose has not changed, nor have our physical collections diminished. We now manage more physical material than we ever have before and we manage both digital copies of that material and digital material that never existed in physical form.

“The challenges of managing data in terms of a long-term and sustainable model is still a work in progress, so we are working very hard at Library of Congress to provide access to the newspaper collections for wide audiences, including researchers and patrons, in ways that are the most useful for them.”

So, the future for The National Digital Newspaper Program (NDNP) certainly looks bright, and Thomas is keen to offer her concluding remarks, stressing that it provides access to the lives of everyday people in a manner that may be different from other historical materials.

“We provide access to all manner of community information and have newspapers from several ethnic and immigration groups, as well as materials in 12 different languages which we plan to expand over time.

“We have found that some of our most dedicated users are family historians, who are fascinated by what they can learn from newspapers. Whether or not they can find their actual history documented, they can still learn about the times that their ancestors lived in and the cultural context of the country. The newspapers provide both a very broad and detailed view of what American culture all is about.”