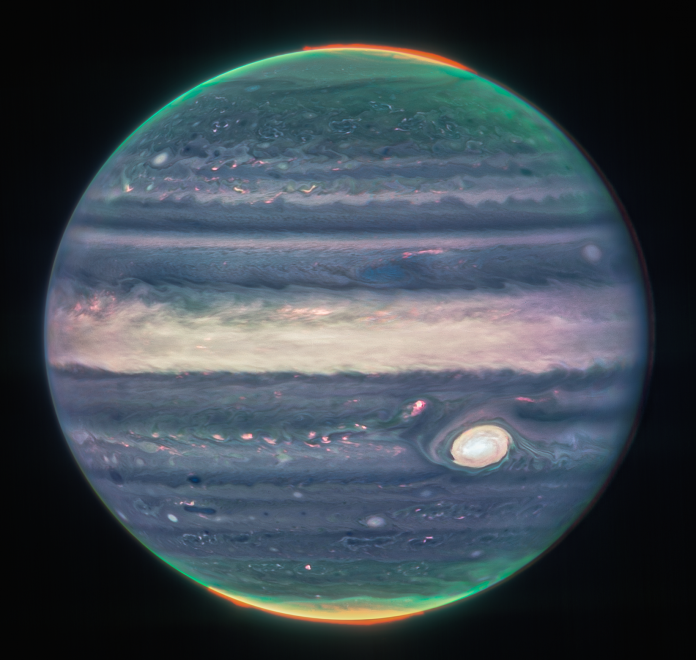 It seems every week the magic of the James Webb space telescope grips us all again, viewed in unprecedented detail the telescope has revealed the giant storms, moons, rings and auroras of Jupiter

The main image we see of Jupiter was created from a composite of several images taken by the magnificent telescope. The images released by NASA have been artificially coloured and edited with technology and infrared lenses as this form of light is not visible to the human eye.

The observatory’s Near-Infrared Camera (NIRCam) has three specialised infrared filters that showcase details of the planet. According to NASA, generally, the longest wavelengths appear redder and the shortest wavelengths are shown as more blue. Scientists collaborated with citizen scientist Judy Schmidt to translate the Webb data into images.

Planetary astronomer Imke de Pater, from the University of California has played a key role in the JWST project stated: “We’ve never seen Jupiter like this. It’s all quite incredible.

“We hadn’t really expected it to be this good, to be honest,” she added.

We hadn’t really expected it to be this good, to be honest

Examining the auroras of Jupiter

Auroras are caused by interactions with particles streaming away from the sun and appear as light shows in the sky. Jupiter’s auroras extend to high altitudes above both the northern and southern poles of the planet.

The famous storm, that we have seen in previous images has been recorded to be so large it could swallow the earth, appears white in these images as do other clouds due to their reflection of sunlight.

When in a wide-field view the James Webb Space Telescope shows us, Jupiter, with faint rings. According to the team from NASA, these rings are a million times fainter than the planet. Along with this, we are also able to see Jupiter’s two ‘tiny moons’ called Amalthea and Adrastea

“This one image sums up the science of our Jupiter system program, which studies the dynamics and chemistry of Jupiter itself, its rings, and its satellite system,” Fouchet said. Researchers have already begun analysing Webb data to get new science results about our solar system’s largest planet.