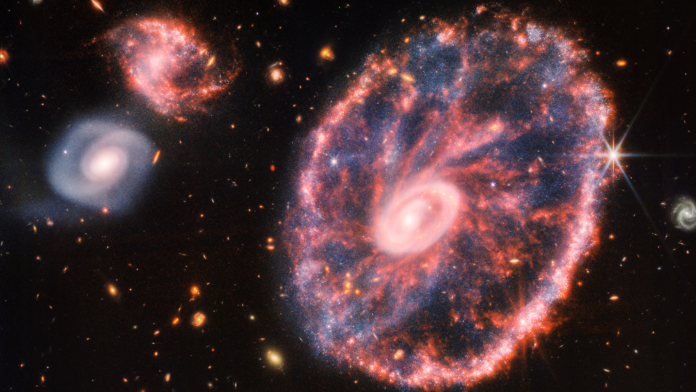 200-300 million years ago, ESO 350-40 or the Cartwheel galaxy experienced a head-on collision that sent a shock wave through the system, changing everything. The gravity of two such massive objects colliding resulted in the distortion of each galaxy. The James Webb Space Telescope has enabled us to see the aftermath of this collision in such beauty and detail.

When galaxies collide or even pass near each other, shock waves sleep through the system setting off bursts of star formation and in extreme circumstances as we can see through the JWST images, the result can be a rare ring-type galaxy.

The Cartwheel Galaxy is a great display of galactic wreckage that will even eventually fix itself according to experts. Researchers are so interested in this phenomenon as it is not often they get to see the evolution of a collision such as this.

We can see two glowing rings, an inner and an outer, the inner ring hosts a bright nucleus home to a supermassive black hole. This is then surrounded by a smaller ring of gas and hot dust. The outer ring however has expanded so much since the initial collision that it is bigger than our milky way galaxy and is teaming with star-forming regions.

The power of JWST and sensing dust

The James Webb Space telescope is fitted with a near-infrared camera (NIRCam) that allows us to piece through the clouds of dust surrounding the galaxies whilst simultaneously collecting samples of the dust.

By collecting samples the JWST was able to conduct a chemical analysis to discover that regions were rich in hydrocarbons and other compounds. Illustrating through its imaging, the JWST shows the closest galaxies in blue and those further away are red or green – these different colours are due to bright emissions from dust being redshifted by the ever-growing expansion of the universe and gravitational forces.

The James Webb telescope is the gift that keeps on giving.