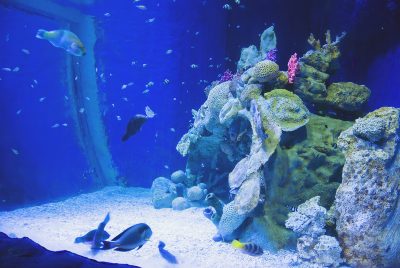 Arthur L. DeVries, from the University of Illinois provides a comprehensive insight into a unique marine species flock, the Antarctic notothenioid fishes

At one time the Antarctic Ocean was home to a temperate fish fauna which included sharks, rays and bony fishes (teleosts). About 20 million years ago the Antarctic waters began to cool and all the temperate fishes died out, except for a bottom-dwelling fish that probably looked like a northern hemisphere sculpin. This hypothetical ancestor gave rise to a group of closely related fishes that survived the cooling waters, which today are known as the notothenioid fishes: (a sub order Notothenioidei nested within the modern bony fishes (Perciforms). Some of the shared features of this group are the lack of a swim bladder making them negatively buoyant in seawater, paired pelvic and pectoral fins positioned one above the other and just distal of the opercula and mostly benthic species.

This suborder includes eight families most of which are found in the Southern Ocean south of the Antarctic convergence. Members of five of the eight families are primarily confined to the narrow shelf region of the Antarctic continent. The families include the Nototheniidae, Channichthyidae, Bathydraconidae, Artedidraconidae and Harpagiferidae. They make up about 90% of the fish biomass of the shelf and the populations of some of the species are huge. The other three families (fig 1) are confined to the waters of the sub-Antarctic islands and the Patagonian region of South America.

When the waters surrounding the Antarctic continent began freezing – a novel trait evolved in some of the progeny of the notothenioid ancestor – which permitted them to avoid freezing; this trait was a blood-born glycoprotein which had antifreeze properties. This antifreeze glycoprotein (AFGPs) lowered its blood freezing point a few tenths of a degree below the freezing point of seawater (-1.9°C). The antifreeze trait allowed them to survive and diversify into many species which filled the ecological niches vacated by the extinction of the temperate fish fauna. Presently, there are a variety of body morphs. Some of the nototheniids and harpagiferids resemble north temperate bottom dwelling thorny sculpins (Cottids).

Other species of the nototheniid family are like smelt and salmonids in body form with a fusiform shape. The nototheniid, Trematomus borchgrevinki inhabits the waters at the underside of the fast ice and finds refuge in the platelet layer and has a body form similar to a codfish. The two nototheniid fishes, Pleuragramma antarctica (Antarctic smelt) and giant Antarctic toothfish, Dissostichus mawsoni inhabit the water column and are neutrally buoyant even though they lack a swim bladder. They have achieved neutral buoyancy by reducing mineralisation of their skeletons and scales and accumulating lipids which are less dense than seawater. The smelt accumulates sacs of clear lipid under its skin and between its dorsal vertebral spines. Neutral buoyancy adaptations allow these two species to cruise through the water column expending energy only for directional swimming rather than swimming to counteract sinking.

Channichthyids, often called crocodile fishes because of their large mouths as adults sit and wait for predators and can gulp and swallow a fish half their size. The most amazing trait found in this family is the lack of red blood cells and hence hemoglobin the oxygen transport pigment. Oxygen taken up at the gills is transported only as dissolved oxygen in their hemoglobinless blood.

However, they have evolved adaptations to partly overcome the lack of hemoglobin such as larger gills for a larger gas exchange surface to absorb oxygen, a larger blood volume with a larger heart and the absence of scales which allows some gas exchange through the thin skin. Despite these adaptations, they do not tolerate stress like their red-blooded relatives and are therefore at a physiological disadvantage relative to the other notothenioids.

However, they have been able to survive for millions of years because the cold Antarctic Ocean contains more oxygen than warm temperate waters because oxygen solubility is greater in cold water than warm water. The presence of one species of the channichthyid species in 12°C waters of Tierra del Fuego exemplifies the creativity of evolution as this one species can tolerate temperatures well above those ice fish species endemic to the Antarctic Ocean which fail to survive at temperatures higher than +6°C. Although this South American fish appears to exist near it physiological limit, it does attest to its evolutionary success despite having to compete with many coexisting red blooded species, such as salmonids and other non-Antarctic fish species.

The notothenioid group is an excellent example of a marine species flock. That is, a closely related clade of species that arose from a common ancestor and underwent an adaptive radiation that gave rise to a variety of species with unique morphological and physiological characteristics that allowed them to successfully invade and fill most of the underutilised ecological niches that were vacated by the extinct temperate fauna. Because they are closely related the similarities and differences in some of their biochemical, physiological and morphological traits can be more easily compared without having to deal with a phylogenetic signal that would be present if they originated from unrelated ancestors.

Thus, a clearer picture can be gleaned from comparative studies of their morphological, biochemical, physiological adaptations and the underlying genomic changes that gave rise to them. This marine species flock is like the African Rift cichlids which also arose from a common ancestor and evolved into hundreds of species which exhibit morphological, behavioural and reproductive differences and utilise different ecological niches in the fresh water lakes.