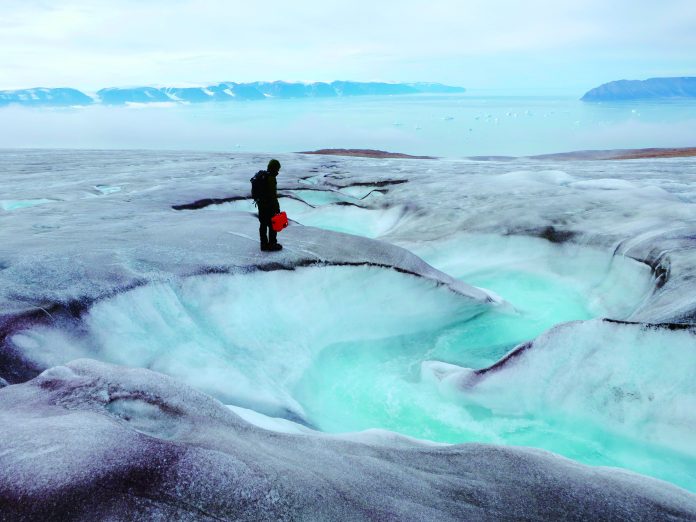 T. Yamanouchi & H. Enomoto from the National Institute of Polar Research explore the abrupt and potentially worrying changes in the Arctic today

Since established in 1973, National Institute of Polar Research (NIPR) engaged in the Antarctic research with operating Japan Antarctic Research Expedition (JARE) for a long time. In 1990, NIPR established an Arctic Environment Research Centre and expanded its research area to the Arctic. Now NIPR is focusing on the research on global changes in the Arctic and Antarctic.

What is happening now in the Arctic, under global warming? In warming, due to anthropogenic increases in carbon dioxide concentration, the surface temperature in the Arctic is increasing with a speed that is more than double the global average. We call this “Arctic warming amplification”, and an understanding of its mechanism is urgently needed.

Reduction of sea ice extent in the Arctic Ocean is continuing, and an abrupt decrease since the 2000s is especially noticeable. Owing to this change, the potential for regular ship navigation through the Arctic Ocean has increased, and they have become broadly known as “Arctic sea routes.” The reduction of the sea ice extent and the warming of the ocean are expected to lead to changes, not only in the physical and chemical ocean environment but also to changes of marine ecosystems.

Looking at the land area, many glaciers distributed around the Arctic are retreating. The Greenland ice sheet, the largest ice mass in the northern hemisphere, is also melting markedly, and the flow-out or collapse from its terminal glacier is serious. This will be a concern in terms of the world sea level rise.

Moreover, the duration of the snow season is decreasing. In such ways, snow and ice have been showing great changes, and thus great impacts on atmospheric circulation and terrestrial biology are foreseen. Changes in terrestrial biological activity will alter the amount of atmospheric carbon dioxide absorption by vegetation and will affect global warming as feedback. Although it is far away from Japan, we cannot turn a blind eye to Arctic climate change, since we are affected by it, too.

To grasp these abrupt changes in the Arctic, to understand the mechanism, and to contribute to future climate change projection, NIPR conducted the Green Network of Excellence Program (GRENE) Arctic Climate Change Research Project “Rapid Change of the Arctic Climate System and its Global Influences” for five years, between 2011 and 2016. 39 institutions from all over Japan participated in the project, and more than 360 Japanese scientists tackled all aspects of the Arctic climate system. Comprehensive Arctic research incorporating multidisciplinary work and collaborations between observation and modelling had been realised.

The successor of the GRENE project, ArCS (Arctic Challenge for Sustainability), which lays delivering emphasis on robust scientific information to stakeholders for decision making and solving problems, was started in FY2015. This is also a national flagship project funded by the Ministry of Education, Culture, Sports, Science and Technology (MEXT), and the NIPR, Japan Agency of Marine-Earth Science and Technology (JAMSTEC) and Hokkaido University are positioned as the key institutions.

Antarctica is an isolated continent surrounding by the Southern Ocean, and snow accumulation would hardly melt all year long, becomes compressed ice covering the continent. The Antarctic ice cap, a massive sheet of ice, has an average thickness of approximately 1860 metres, and together with ice shelves makes a size approximately 14 million km (2), 37 times the size of Japan.

Located far from civilisation, Antarctica functions as both an environmental monitoring centre that allows us to assess the impact of human activity on the planet (e.g. atmospheric CO2 concentration), and a time capsule that gives us a glimpse into the global climate of the past. Japanese Antarctic Research Expedition (JARE) was started in 1956/57 as a part of the International Geophysical Year (IGY), and Syowa Station was established on Ongul Island in the Antarctic. Since then, various observations have been performed at the station and surrounding areas and resulted in much of the outstanding scientific outcomes.

Paleoenvironmental study is conducted based on deep ice cores of ice sheet drilled at Dome Fuji Station, 3810 m a. s. l. and 1000 km inland from Syowa Station. Ice core analysis unveiled the temperature change during the past 720 thousand years, indicated periodic variations between the glacial and interglacial period in about 100-thousand-year frequency. The information retrieved from the ice cores will greatly contribute to improving projections of the future global climate and environment. Under the current Japanese Antarctic Research Project Phase IX, entitled “Global changes and movements on Earth system through Antarctic observations”, NIPR is planning to carry out a new deep ice coring project near Dome Fuji Station, aimed at retrieving the oldest ice core (more than 1 million years) in the world.