As has been pointed out previously, the tremendous amounts of hydrogen (1H) present in the water (H2O) of our body allow a superb illustration of the cardiovascular anatomy by magnetic resonance imaging (MRI) – even in miniaturised experimental mouse models which are used to mimic and explore human diseases. However, beyond morphology, magnetic resonance spectroscopy (MRS) can also be exploited to address important metabolic processes, which are mandatory for the proper function of the heart (and also all other organs).

To ensure the continuous energy supply required for regular heart work, a permanent de novo synthesis of the spent ATP – the most important energy carrier within the body – is essential. For this, primarily sugars and fatty acids are burned, e.g. glucose and palmitic acid. The healthy heart usually fuels its energy production by one third from glucose and by two-thirds from fatty acid oxidation.

However, in several cardiac diseases – in particular, under conditions of limited oxygen support – this normal ratio is shifted to increased glucose utilisation and reduced oxidation of fatty acids. Such substrate shifts can be smartly demonstrated by isotopomer analysis using 13C MRS.

To this end, the heart is supplied with substrates, at which the normal carbon isotope 12C is substituted at suitable positions in the molecule by the naturally to less than 1% abundant isotope 13C (in contrast to 14C not radioactive). When these substrates are running through the normal metabolic pathways, the 13C labels of glucose and palmitate will end up at different positions of the glutamate carbon skeleton depending from the original substrate, as well as the number of turns within the citric acid cycle. The differing neighbourhood of 13C nuclei in the respective glutamate isotopomers is then reflected in individual 13C MRS coupling patterns, which allow an unequivocal assessment from which carbon source the individual isotopomers originate and, thereby, alterations in substrate metabolism can easily be detected.

This is illustrated in a model of hindered oxygen delivery to the myocardium caused by lack of the hemoprotein myoglobin. While morphology and function are equal in normal, healthy mice (1st column; top, WT=wildtype) and mice lacking myoglobin (bottom, Mb-/-), it is striking that 13C MRS coupling patterns clearly differ (2nd column). When comparing these signals with a coupling scheme shown here, it becomes evident that in the upper spectrum the signals pointing to the utilisation of palmitate are particularly eye-catching, while in the lower trace the patterns evoked by combustion of glucose stick out. The quantitative analysis reveals that lack of myoglobin leads to a shift of the normal fuel utilisation ratio of 1:3 (glucose: palmitate) to an almost equal metabolisation of both substrates – a shift which is similarly observed in humans with cardiac hypertrophy, i.e. an overgrowth of the heart resulting in increased diffusion distances and limited oxygen transport.

In the present model, the detected substrate shift obviously acts as a biochemical oxygen saving mechanism at the consumer end: it is well known that for combustion of glucose noticeable less oxygen is required as for fatty acids – at a generation of same amounts of ATP. Therefore, by increased utilisation of the oxidative more favourable substrate, that is glucose, myoglobin-deficient hearts can compensate for the limited oxygen supply. While in young mice, this helps to ensure uncompromised cardiac function, in the long run this substrate switch leads to serious side effects, in that the permanent preferred utilisation of glucose leads to an enhanced accumulation of lipids in older Mb-/- hearts. This is demonstrated in the third column showing 1H MR spectra acquired from the interventricular septum.

Here, resonances for creatine (Cre), taurine (Tau), choline (Cho) and several signals originating from lipids (Δ-1, (CH2)n, CH3) can be unequivocally resolved. While signals for the first metabolites are comparable, all lipid peaks are substantially increased in hearts lacking myoglobin. Quantification revealed that Mb−/− hearts are characterised by a threefold higher lipid content compared to WTs. This disparity was not apparent in younger mice pointing to a chronic response to the altered substrate utilisation. 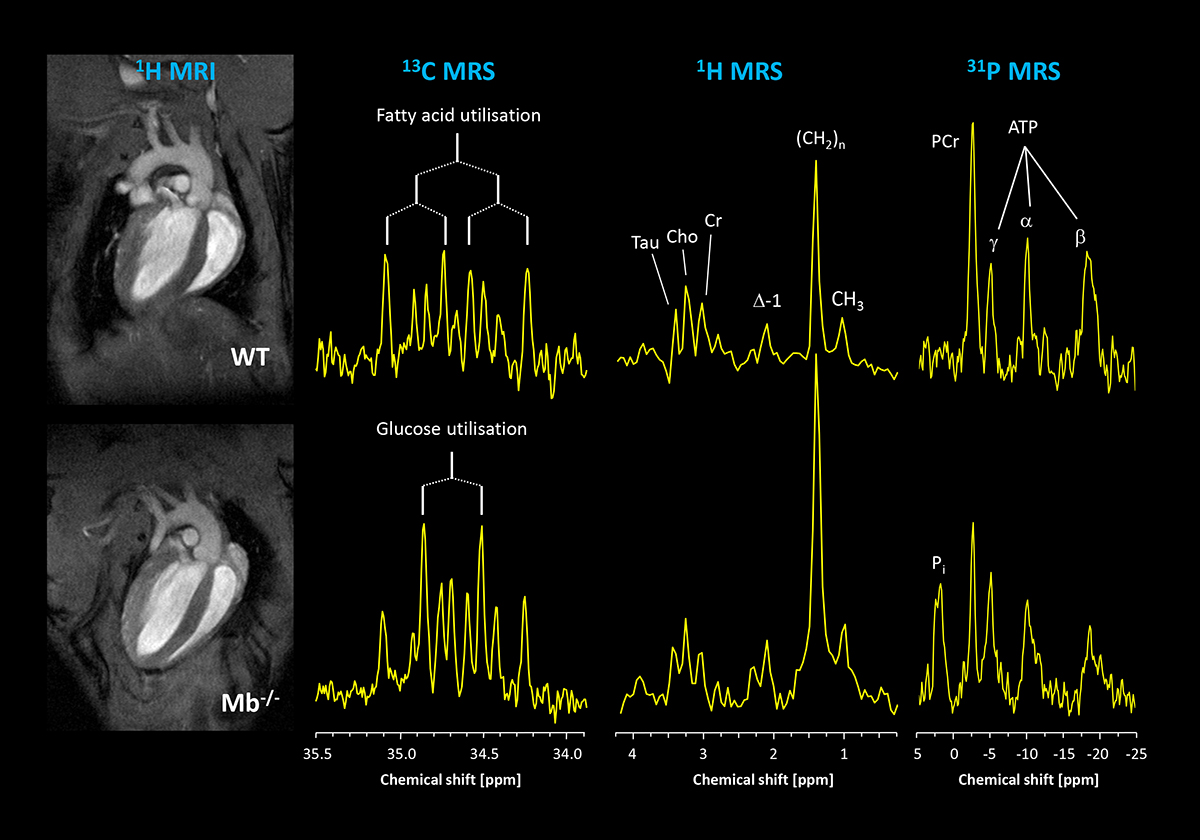 Importantly, increased long-term accumulation of lipids is known to result in an enhanced formation of reactive oxygen species and to dysregulation of mitochondrial function which is crucial for resynthesis of ATP. This molecule can be excellently detected by 31P MRS – each of its three phosphorus atoms (α, β, γ) yields a unique signal (4th column). When this approach is applied to myocardial energetics of older Mb-/- mice, it becomes evident that the prolonged lipid accumulation indeed leads to compromised energy homeostasis. The comparison of 31P MR spectra of Mb-/- and WT hearts clearly demonstrates substantially lower myocardial phosphocreatine (PCr) levels for the mutant, reflecting a limited availability of this ’energetic buffer’ as a consequence of the chronically altered metabolism.

It is noteworthy, that the extent of the observed energetic deterioration in this mouse model is of similar magnitude as the alterations determined in humans during the development of heart failure.

As shown by these examples, the combined use of several MRS techniques allows to gain a comprehensive picture of heart metabolism and energetics – already at a time point when no anatomical and functional manifestations yet occur. Due to the non-invasive nature of these investigations, repetitive measurements can serve to monitor the progression of heart diseases and to assess the success of suitable therapies in both (i) experimental models for the exploration of the underlying causes of human cardiomyopathies and (ii) humans for diagnosis and adjustment of personalised precision medicine.