Magnetic resonance imaging (MRI) is a powerful tool that uses strong magnetic fields and radio waves to produce detailed images of the inside of the body. MRI offers many benefits over other imaging techniques – it is patient-friendly as it is non-invasive, and also gives extremely clear, detailed images of soft-tissue that other imaging techniques cannot achieve. In addition, MRI scans can be used to examine almost any part of the body, such as the brain and spinal cord, heart and blood vessels, bones, joints and internal organs. As a consequence, MRI has established as gold standard for diagnosis in several clinical settings, such as cervical spine injury, tumours, myocardial infarction and many more.

However, MRI techniques are not only crucial for human diagnostics but are also of major importance for basic research to explore pathomechanisms and potential novel therapeutic targets in animal models of human diseases. Providing superior contrast between soft-tissues and due to its multifaceted field of applications (anatomy, functional parameters, angiography, metabolism, inflammation, tissue characterization etc. see below), MRI allows an accurate and longitudinal in vivo analysis also of cardiovascular relevant disease models.

Due to its non-invasive nature it also perfectly matches current requirements of animal care, such as the 3Rs (replacement, reduction and refinement). Importantly, it also provides the possibility for locoregional analysis of immune cell infiltration, changes in myocardial texture, and local function in the myocardium in a repetitive manner, thereby reducing the number of animals and increasing the reliability of the acquired results, since over the entire period of investigation all data are obtained from the same individuals. 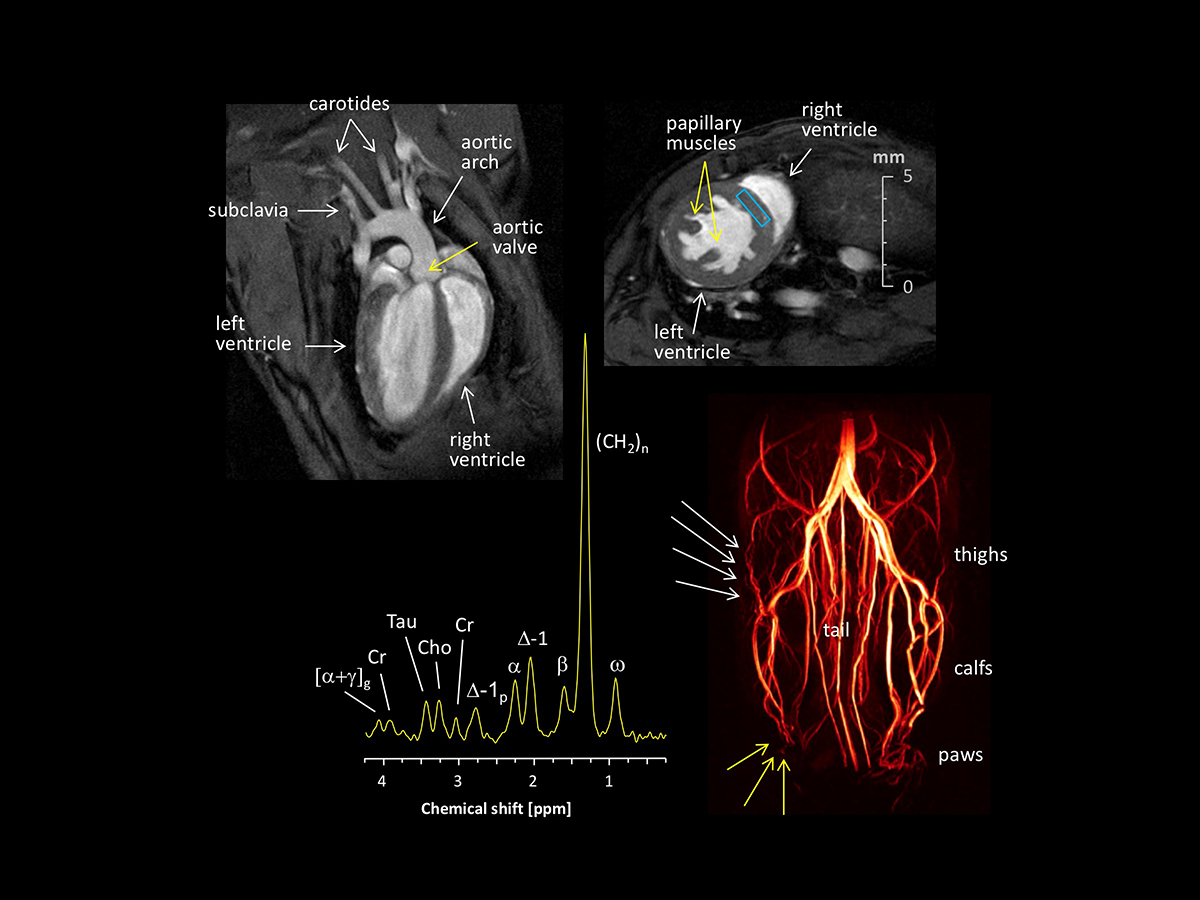 The most commonly used MRI scanning technique typically works by harnessing the magnetic properties of hydrogen atoms to build these images of the body. Certain atoms, including hydrogen atoms (1H), can absorb and emit energy in the form of radio waves when they are in a strong magnetic field. Hydrogen atoms are present in water and fat and are vastly abundant within the body (~75% of the total mass), thus the multiplicity of MRI applications focuses on the detection of hydrogen (1H) nuclei. However, other types of MRI scans can take advantage of the magnetic properties of the somewhat exotic appearing X-nuclei (such as 13C, 19F, 23Na, and 31P) to obtain information which by other means would be difficult to access.

With these methods not only anatomical images of the inside of the body can be acquired, but by special techniques also foci of inflammation or special proteins like myoglobin, small molecular compounds like adenosine triphosphate (ATP) and glucose, respectively, or even ions (like sodium, potassium or chloride) in individual organs, such as the heart, can be determined without radiation exposure. The latter applies for all MR-related methods both MRI and the so-called MR spectroscopy (MRS) but as well for MR angiography (MRA). Thus, also these measurements can be carried out noninvasively at the living animal if required in a repetitive manner.

Thereby, important issues of cardiac metabolism in the context of myocardial infarction, cardiomyopathies or heart insufficiency can be addressed, in particular, the high energy phosphates as well as oxygen supply, pH regulation and ion or body lipid homeostasis. Also, airway analysis by use of MR-active inert gases, such as 3He, SF6 of 129Xe is feasible by MRI. The power of these more unusual approaches will be addressed in future issues.

The most commonly used animal model in basic research is the mouse, which can be easily genetically modified to mimic inherited human gene defects or to explore specific signalling pathways as a target for therapy. However, for murine MRI analysis dedicated hardware is required to enable high-resolution analysis of the small organs. In particular imaging of the mouse heart characterized by low mass and very high heart rates compared to human conditions (~0.1 vs 300-gram heart weight; 600 vs 60 beats per minute) is a very challenging task. Nevertheless, by choosing appropriate acquisition parameters and coil setups, images of excellent quality can also be obtained from this species as demonstrated in the above figure.

Left top shows a healthy murine heart in long axis orientation with superb illustration of the left and right ventricle, the aortic valve as well as the aortic arch with passing of the two carotid and the left subclavian arteries, while in the right top hand corner a short axis slice of a hypertrophied murine heart is displayed with massive trabeculation and thickening of the left ventricular wall. The left bottom represents a 1H MR spectrum acquired from the rectangle in the interventricular septum (right top) allowing the quantification of cardiac metabolites and lipids with discrimination of mono- and polyunsaturated fatty acids (FA), thereby addressing the impact of dynamic metabolic changes during development of heart diseases. Assignment of 1H signals: [α+γ]g, bound to α+γ carbons of the glycerol backbone; Cr, creatine; Tau, taurine; Cho, choline; ∆-1p, next to polyunsaturated FA carbons; α, bound to the α-carbon of FA; ∆-1, next to monounsaturated FA carbons; β, bound to the β-carbon of FA; (CH2)n, methylene groups of FA; ω, terminal methyl group of FA. Finally, in the right bottom the vessel system of the murine hindlimbs is imaged by contrast agent free time-of-flight MR angiography revealing the evolution of collateral vessels (white arrows) to compensate for perfusion deficits in the periphery around the paws (yellow arrows).