One of the classic tactics employed by food industry lobbyists to undermine policy proposals that aim to restrict how they push their unhealthy food is to focus on ludicrous-sounding examples that make us doubt the validity of the approach.

We all know that ‘doubt’ is a classic tactic used by the smoking and carbon-emissions industries – whilst there is doubt, debate or ‘theory’, you cannot agree policy, and you cannot hold anyone to account. (For more on this, I implore you to listen to the most excellent series on Radio 4: how they made us doubt everything.)

The food industry utilised this very effective tactic in Transport for London’s junk food advertising ban. Their lobbying meant they could apply for ‘exceptions’ such as ignoring salt content or brand advertising. The loopholes got larger and the rules got confusing and more unhealthier products slipped through the net. And here we are again with Boris Johnson’s announcement of a 9pm watershed on unhealthy food adverts which could mean curtains for condiments and the end of mint sauce advertisements. So, is mint sauce unhealthy? Well, yes and no.

Talking about food in a way that makes people feel confused or guilty about what they are eating is destructive… to individuals. But policymakers need to be able to draw a line in the sand to define what constitutes ‘healthy’ and what doesn’t… to food companies.

Imagine if the Government said it was okay to smoke the odd cigarette here and there? Or it was okay to have the odd drink when you’re pregnant? Or you have to wear a mask in a shop but you don’t have to wear it in a pub?  Or you can quarantine on return from Spain if you’re Scottish, but not if you’re English… Imagine the confusion…

When it comes to public health policy you have to be more black-and-white, or in the case of nutrition, maybe we could stretch to red, amber and green.

Even diametrically opposed health professionals broadly agree that author Michael Pollan had it about right when he said ‘Eat food, not too much, mostly plants’. But try and reframe that as a workable policy. You can’t. We have to be more pragmatic. Our diet and lifestyle environment is not what it once was, and the ideal scenario of ‘real food’ is far beyond the reach, desire and pockets of the majority of people. Change is needed, not just at the individual level but on a national level.

Proposals to restrict advertising of less healthy food on TV before 9pm are likely to be based on the Government’s nutrient profiling score (NPS). This is an evidence-based model that was developed by the Food Standards Agency in 2004 and was openly consulted on and refined by many independent experts.

It is not perfect, but we are very lucky to have it and it has been replicated all over the world. The NPS takes into account both the negative nutrients such as whether food is high in energy, saturated fat, salt or sugar (HFSS), but also whether it contains positive nutrients that might go some way to mitigating the negative points such as protein, fruits and vegetables and fibre. It has also been updated to reflect the most recent dietary guidance, but the new (stricter) version is yet to see the light of day. The NPS is largely applicable to processed foods rather than whole products such as eggs and avocado.

The NPS works on a sliding scale of healthiness – from less healthy to healthier. You can often move from being ‘unhealthy’ to ‘healthy’ with a simple ingredient swap. More protein, fibre or vegetable content, or less salt, saturated fat or sugar, gives you a lower (healthier) score. This is very apparent when you look at the traffic light, colour coded, front of pack nutrition labelling on foods. You can clearly see variation within the same category of products – one mint sauce might have a red label for being high in sugars, the next, an amber. 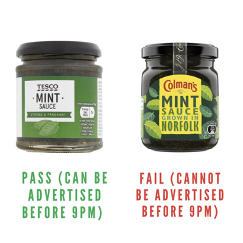 The same applies to lots of different products within the same food category. Cereals and yogurts with lots of added sugar will fail and be classed ‘less healthy’, while similar versions with less sugar will pass. Even pizza can pass the model if manufacturers add vegetables and protein-rich toppings like chicken, rather than high fat processed meat.

Action on Salt and Sugar

Reformulation is done regularly by the food industry for various reasons. At Action on Salt and Sugar, we have made a life’s work of showing that almost every product category has a chance to redeem itself by reformulating: Red, Amber and Green. 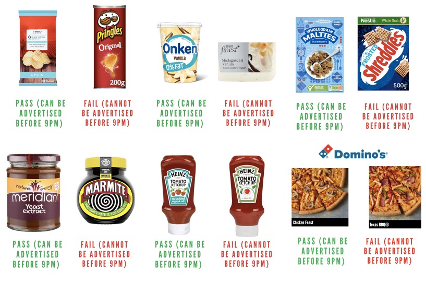 The recently-announced salt and calorie reformulation targets are a vital part of the Government’s new obesity strategy. The availability of foods with less salt and fewer calories will make it easier for parents to make healthier choices for their families and, as more products will then pass the Nutrient Profiling System, more manufacturers will be able to continue promoting their products to children before 9pm. Families are healthier, and the food industry is happy. Win-win.

For the remaining 5%….if you want to advertise in technicolour, please do it after9 pm.