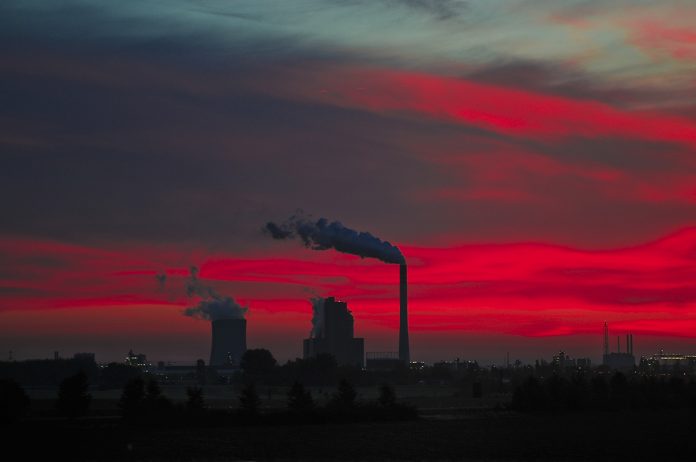 José Goldemberg, Professor Emeritus, University of São Paulo, explains all we need to know about technological “leapfrogging”, a strategy to face global warming and the energy future of developing countries

2018 was the fourth hottest year on record; last year, global land and ocean surface temperatures were 0.79 degree Celsius above the 20th-century average. Since 1880 when record keeping had only been around for three years, 2015, 2016, 2017 were hotter. Much of Europe, the Mediterranean, New Zealand, Russia and parts of the Atlantic and the Pacific Ocean faced heat waves. The most impacted area was the Arctic, which is warming faster than the global average.

Scientifically, there is little doubt that the main driving force behind global warming is the increased consumption of fossil fuels (coal, gas and oil) from which over 80% of all energy used in the world originates. The use of fossil fuels leads inexorably to the emissions of carbon dioxide (CO2) which is the main gas responsible for global warming. There are others such as methane and chlorofluorocarbons (CFCs), which contribute less.

The developed countries in Europe, the United States and Japan, which benefited first from the industrial revolution of the 18th century, were the main emitters of CO2 until the end of the 20th century. These countries are usually labelled as the OECD (Organization for Economic Cooperation and Development) countries and have a population of approximately 1.2 billion people. 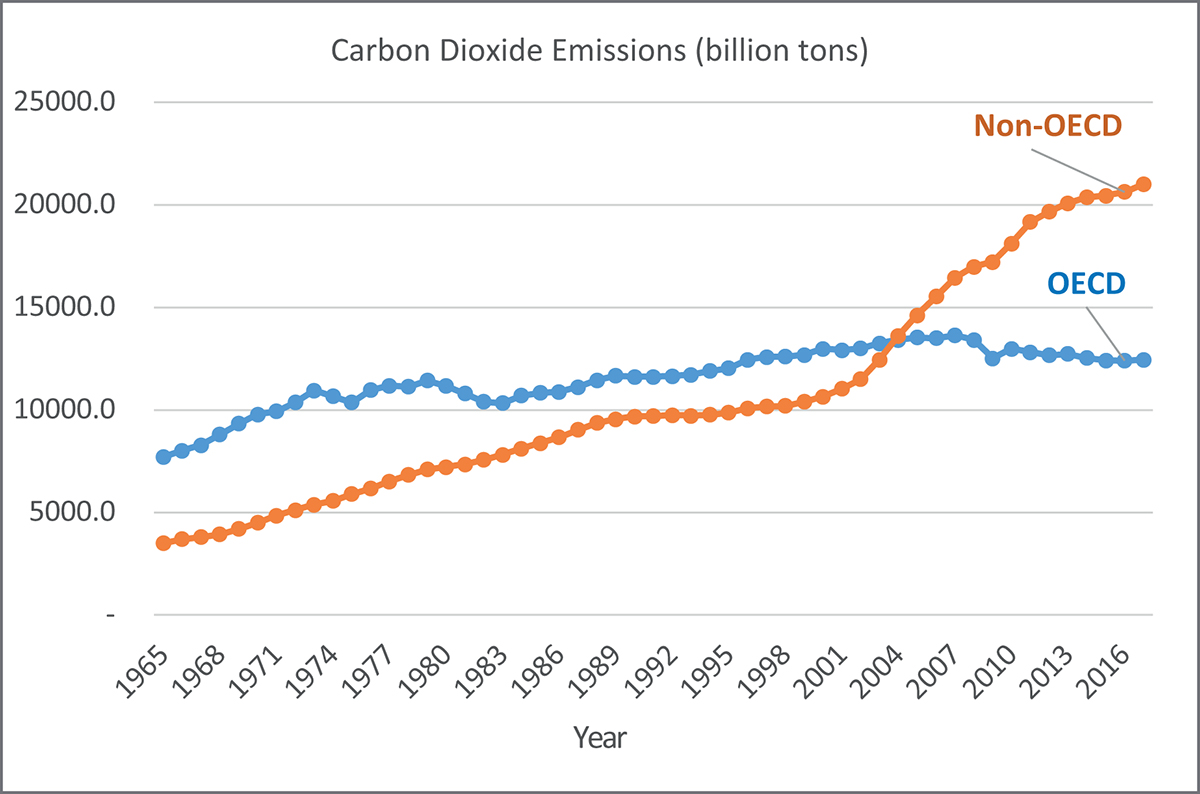 In all the others (non-OECD countries), the population is approximately 6 billion people. This group of countries includes all the former colonies and the less developed regions of the world, which are latecomers in the development process and use the technologies developed in the industrialised countries. However, as the population of the non-OECD countries increased and they started to industrialise their emissions grew explosively as shown in Figure 1.

To face these problems, one has to try to understand what the drivers of the flattening of the growth of CO2 in the OECD countries are. The most important of them is the increase in the efficiency of the production of energy from fossil fuels: Watt’s original machine – which converted heat (from the burning of coal) in mechanical work (and later on in electricity) – had an efficiency of approximately 3%. Present thermal plants generating electricity have efficiencies in place at least 10 times higher. In other words, much more energy is produced using less fuel. The efficiency in using this energy has also increased considerably.

The increase in the efficiency of energy production from fossil fuels is due in great part to the competition between companies of the industrialised countries which spurs technological innovation. Successful companies with a monopoly on some technology are bound to take fewer risks; they stand to lose their technological leadership role when competitors, willing to take more risks to adopt new technologies. Such are the “gales of constructive destruction” described by Schumpeter (1).

In addition to that, the increased use of renewable energy sources (which do not emit CO2) such as hydropower, wind machines, photovoltaics and biomass, contributed to the reduction of carbon emissions.

Another driver that helped innovation was the need to reduce the local pollution originating mainly from the use of coal and oil. These fuels have impurities that thrown in the atmosphere, are the cause of fog, acid rain and other environmental problems which are not tolerated by the population (mainly in the larger cities) and led to the introduction of strict environmental regulations. The compliance of such regulations stimulated further technical advances.

The problem we face now is how to encourage developing countries to adopt these technologies – or eventually new ones – to reduce the fast growth of their CO2 emissions.

Part of the response consists of transferring current technologies in OECD countries into developing countries. This was done routinely in the colonies of the imperial powers of the 19th with second rate and sometimes obsolete technologies.

An example is solving the lighting problem in many isolated villages where kerosene lamps and candles are used. Bringing electricity to these villages and replacing kerosene and candles by incandescent light bulbs is the usual solution adopted in many countries. A much better solution is to generate electricity locally in PV (photovoltaics) panels and powering compact fluorescent lightbulbs (CFL). A PV-CFL system is some 100 times as efficient as kerosene and a half-million times more efficient than candles. The PV-CFL solution leapfrogs over its alternative: a large expensive electric generating station sending power over many miles of transmission and distribution lines, supplying a bulb that ultimately converts less than 1% of the original fuel energy to light (2).

What experience shows is that many of the improvements in industrialised countries have made their way into less developed countries. Examples are given by the automobile industry where some cars manufactured in India and China have fuel economics better than models used in the U.S. In steel production, in general, developing countries produce more steel per tonne using less energy than many European countries. New refrigerators in China today consumes much less energy than in the United States 30 years ago i.e. China has “leapfrogged” stages in this area (3).

Another outstanding example of such “technological leapfrogging” is the Ethanol Program in Brazil. The Program started in 1975 when, in response to an international oil crisis, the government launched the National Alcohol Program (NAP) with the aim of alleviating some of the country’s dependence on fossil fuels. Back then, there was great interest in how crops, already in production in large scale such as sugarcane Brazil, could be used to produce ethanol and other ethyl-alcohol fuels.

In a 1978 paper, published in Science, we looked specifically at the energy cost and expenditure of several different crops: sugarcane, cassava and sweet sorghum. These specific crops are essentially a form of non-polluting solar energy: the rays of the sun provide the crops with the energy they need to grow – and a little extra; that extra energy is stored by the plants – quite literally saved away for a rainy day – and can be extracted in the form of ethyl-alcohol at a later date (4).

Such work demonstrated that sugarcane was the most efficient crop to use when converting this solar energy into a chemical fuel and it paved the way for the Brazilian energy-boom that followed. Today, an estimated 50% of the gasoline that would be in use for fuelling cars in Brazil has been replaced with ethanol from sugarcane, a renewable fuel (5), (6).

There are more than 100 hundred countries in the world producing sugar from sugarcane and the successful ethanol program in Brazil could be replicated in other countries as an alternative to electric vehicles.

The United States developed a similar programme producing large quantities of ethanol from corn which stated in the year 2000 following the steps of the pioneering Brazilian program.

There are many other examples of “technological leapfrogging” going on in developing countries which were identified by local scientists that are more adapted to the national resources and peculiarities of their countries.

“Technological leapfrogging” provides a route for scientists in developing countries to skip over the potential stumbling blocks of using unsuitable technologies and in Brazil, it has been used to alleviate one of the biggest problems we face today: the global energy crisis and global warming. Expanding the approach globally could shape the energy-climate for future generations around the globe.

The energy future of developing countries is not a matter of destiny but choice.

The University of São Paulo, Brazil Institute of Energy and Environment

The role of energy efficiency in achieving net zero targets

How is the UK cleaning up its energy?