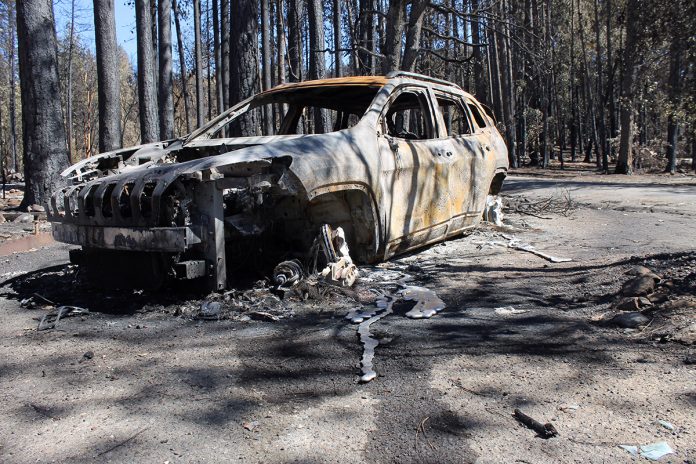 Birgit Puschner and Pamela Lein from the University of California, Davis share their expert views on the impacts of urban wildfire on chemical contamination in small backyard agriculture

Worldwide, the frequency and severity of wildfires are increasing due to changes in temperature and precipitation patterns consistent with climate change and changes in land use, particularly at the rural-urban interface. The fire problem is particularly acute in Northern California, which has experienced a significant increase in wildfire frequency over the past few decades. In addition to the risk of injury, loss of life and destruction of property, there is increasing appreciation that wildfires pose significant environmental health threats.

Much of the research on adverse health impacts of wildfires has focused on wildfire smoke and recent reviews of this scientific literature conclude there is strong evidence that wildfire smoke exacerbates respiratory ailments, including asthma and chronic obstructive pulmonary disease and contributes to cardiovascular disease. What is less well understood, however, is the potential impacts of wildfire debris on human, animal and ecosystem health.

Debris from urban wildfires is particularly worrying because these fires involve the combustion of building materials, electronic equipment, chemicals and industrial equipment that contain toxic chemicals such as metals, pesticides and persistent organic pollutants (POPs).

POPs of concern include the polychlorinated biphenyls (PCBs) and polybrominated diphenyl ethers (PBDEs). PCBs are man-made chemicals that were widely produced for diverse industrial applications beginning in the 1930s until their production was banned in 1979 because of their carcino­genic potential and developmental neurotoxicity.

PCBs are found in older electrical transformers, capacitors and light ballasts still in use today and in caulking material, paints and sealants used to construct municipal buildings and homes prior to the 1979 ban. PBDEs are also man-made chemicals that were widely used as flame retardants in various consumer products including foam, plastics and textiles.

Due to health concerns, the state of California began prohibiting the manufacture, distribution and processing of flame-retardant products containing penta- and octa BDEs in 2006. However, human exposure continues because many households have products produced prior to the ban. Moreover, PBDEs are not chemically bound to materials and therefore, leach out of household products into the environment. Like PCBs, PBDEs persist in the environment and biomagnify up the food chain.

Pyrolysis results in the release of PCBs and PBDEs into the environment. Increased PCB concentrations have been documented in air masses associated with fires. The ash from the September 11th 2001 World Trade Center fire in New York City was found to contain excessive PBDE levels. The combustion of man-made materials, particularly electronic equipment, is also associated with the mobilisation of metals. For example, ash debris from the California wildfires from 2007 contained toxic metals, specifically, arsenic, cadmium, copper and lead, at levels associated with long-term health effects in animals and humans.

Urban wildfires not only release toxic chemicals, but also generate hazardous compounds, such as dioxins and dibenzofurans, which are formed by the combustion of organic matter, such as paper and wood. Once the burning has stopped, re-volatilised chemicals distribute out of the atmosphere onto soils, vegetation and surface water, while non-volatile chemicals are deposited as ash. The increased environmental availability of these chemicals increases the risk of groundwater contamination, the uptake by plants and ingestion by animals, culminating in increased risk of human exposure for months to years. Thus, a question of growing concern is whether urban wildfires pose a significant long-term environmental health risk via chemical contamination of home-grown produce or animal-derived foods.

This concern is heightened by lay articles in the New York Times and San Francisco Chronicle and peer-reviewed publications reporting increased human exposure to lead (Pb) through consumption of eggs produced by backyard chickens. Eggs and eggs products are one of the most consumed foods worldwide. In the United States, individuals consume an average of 24 grammes of eggs per day. Backyard chicken ownership has grown in the United States in part because the eggs from backyard hens are perceived to be healthier than commercially produced eggs.

However, recent studies have identified concerning levels of Pb in eggs produced by chickens raised in areas with significant Pb contamination of the soil, usually as the result of the weathering of older buildings with Pb-based paints. The consumption of one average size 50-60 gramme egg from Pb-contaminated environment can exceed the safe threshold dose of 6µg of Pb per day from all combined dietary sources. What about PCBs and PBDEs? These are very fat-soluble chemicals and egg yolk is rich in lipids resulting in an average fat content in an egg of 10%. Thus, the potential for significant contamination of eggs in regions with increased soil levels of these POPs is not unreasonable, as suggested by recent data reporting the detection of PCBs and PBDEs in milk from dairy cows of California.

The overwhelming majority of food safety research associated with backyard poultry and other home-produced food products has largely focused on microbial contamination. Human illness from most foodborne pathogens is limited to transient gastrointestinal symptoms; in contrast, human exposure to unsafe levels of PCBs, PBDEs or metals has the potential to cause long-term adverse health effects. Currently, urban and backyard farmers have no way of knowing whether eggs or other home-grown food products are contaminated with toxic chemicals unless they are lab tested. There is, therefore, an urgent need to study environmental chemicals in home-produced food in geographic regions that have experienced urban wildfires to assess the potential food safety risk and to generate information needed to inform rational risk management.

In conclusion, the increase in wildfires has potentially serious long-term health consequences for communities and ecosystems. One important concern is the generation or release of chemicals into the soil and water environment and the risk for chemical contamination of home-grown produce, eggs and other animal-derived food products. To more accurately predict the risk to humans, it will be necessary to obtain data regarding the actual levels of toxic chemicals of concern in the environment before and after urban wildfires and to model the transfer of these contaminants through the food chain.

Please note this is a commercial profile