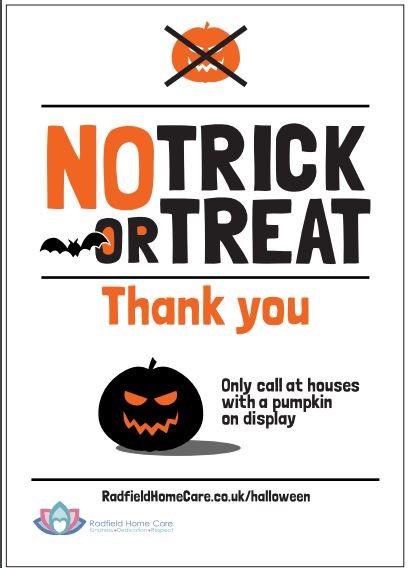 Halloween is a fun time for many, dressing up, collecting as many sweets as possible and joining in on the community spirit. However, for dementia sufferers, Halloween can cause severe fear and confusion

According to the experts at Radfield Home Care services, Alzheimer’s and dementia can cause a blurred sense of reality, and therefore unexpected knocks at the door, scary masks and fearful costumes can trigger distress as they lack the ability to differentiate between fantasy and reality.

Because of this, Radfield have rolled out a Halloween awareness sticker across homes in the UK highlighting that a dementia sufferer lives here. Carers of both dementia suffers and elderly that live alone have been sent the posters to place in the windows of their client’s and if you, a friend, a neighbor or family member suffer with dementia – a free downloadable poster ready to be printed.

According to Alzheimers.org, there are 850,000 people with dementia in the UK, with numbers set to rise to over 1 million by 2025. 225,000 will develop dementia this year, that’s one every three minutes.

There is no cure for Alzheimer’s disease or any other type of dementia, however, Radfield carers are committed to improving the lives of those who suffer.

For Halloween, Radfield Home Care is aiming to raise awareness of how the elderly and those living with dementia can be negatively affected by ‘trick or treating’.

Not everyone will realise that an elderly person may feel afraid and be intimidated by visitors and strangers at their door in the evening when it’s dark. For a person with dementia, scary masks and costumes are a blur of reality that can trigger confusion and distress. Or, that disruption to their routine and environment can be difficult for them to deal with.

As Halloween has spread in popularity across the UK some areas carry an unwritten ‘no pumpkin’ rule. Children and families who are trick or treating will only visit houses that have a lit pumpkin at their door or in the window. Unfortunately, not everywhere adheres to this rule so Radfield have created a friendly ‘No Trick or Treat’ poster for their clients.

Radfield stresses that they don’t want to stop anyone else having fun by celebrating Halloween but do ask that people show compassion and understanding for the elderly and vulnerable.

The objective is to raise awareness within local communities to respectfully avoid visiting the homes of any elderly people or those with dementia who want to ‘opt-out’ of Halloween.

Radfield have created a friendly and fun poster that anyone can put on their door to politely show that they would prefer to not have ‘trick or treat’ visitors on the evening.

Margaret has lived alone since her husband died two years ago and has found the grief difficult to deal with. Her only son lives several hours drive away and she doesn’t see him very often, maybe two or three times a year.

Firstly, due to the grief, and then compounded over time she found herself becoming more isolated and lost confidence in leaving the house alone. As a result of being withdrawn, she became more fearful and her worrying began to overwhelm her thoughts and often her mind would blow incidents out of proportion.

Last year, on Halloween, Margaret heard a knock at the door. As it was dark outside, her initial reaction was of concern to answer the door to an unknown visitor. As she struggled to get there, she heard someone rattling the door and then shouting through the letterbox. Margaret felt terrified and froze behind the door.

She could hear laughter and shrieks outside the house and Margaret’s imagination ran wild. She imagined someone who may want to get her to the door so they could force their way in to attack her and steal her pension. She had read about the same thing in the paper.

Margaret spent the evening sat in the dark alone with genuine fear that someone would use Halloween as a pretense to get her to answer the door and then attack her. She didn’t sleep at all that night and in the following weeks her anxiety was so bad she couldn’t leave the house.

Thankfully, Margaret now has a Radfield carer who has helped her to deal with the isolation and anxiety. This year on Halloween, Margaret’s carer is going to stay with her to ensure that she is not alone or scared.

Dr. Hannah MacKechnie GP and founder of Radfield Home Care said :“Halloween can prove to be a scary time for people living with dementia or physical limitations. Having strangers at the door and the fear of tricks being carried out can be very stressful.

“The home should be a place of security and safety and the potential fear caused by trick or treating could create negative associations of being alone at home. This may then result in negative behaviour, withdrawing more from society, losing confidence and then being at a greater risk of falls and other age-related issues.

“For older clients with dementia, Halloween costumes and the different noises of young people roaming the streets may cause an increase in disorientation and fear as they struggle to understand the altered world around them, and won’t necessarily have the cognitive ability to understand that it is time-limited.

“It is so important as communities that we support and protect our older residents and being thoughtful and considerate at this time can make a significant difference to an individual’s sense of well-being and safety.”