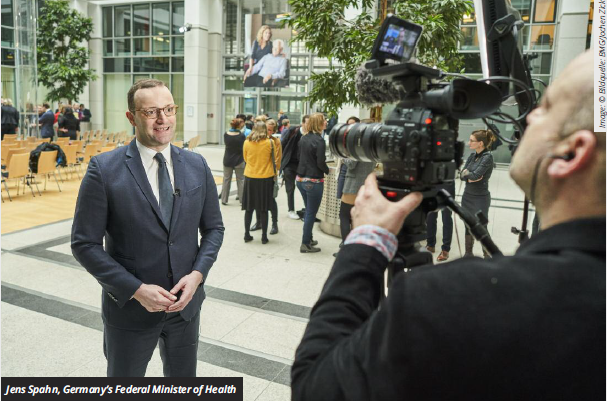 The background of Jens Spahn, Germany’s Federal Minister of Health is examined here, plus the wider work of the Federal Ministry of Health concerning health, prevention and long-term care

Since 2018, Jens Spahn has been the Federal Minister of Health, in Germany. Before looking at some of the Ministry’s current priorities, it’s helpful to find out something about his background. Indeed, after training as a banker, he was Germany’s Parliamentary State Secretary to the Federal Minister of Finance between 2013. Since 2002, he has been a Member of the German Bundestag.1

Federal President Frank-Walter Steinmeier appointed Jens Spahn as the Federal Minister of Health in the Cabinet of Federal Chancellor Angela Merkel on Wednesday 14th March 2018. In terms of his credentials for this very important role, there is no doubt that the 37-year-old Spahn has these in abundance. For example, from 2005 to 2015 he was a first spokesperson of the CDU/CSU

Parliamentary Group in the Bundestag’s Committee on Health – at the time he was, in fact, the group’s health spokesperson.

In terms of the Federal Ministry of Health’s wider work, it is worth pointing out that they are responsible for many policy areas, which can be summed up in by the areas of health, prevention and long-term care. Indeed, at the heart of the area, ‘health’ is the vital task of safeguarding and further developing the effectiveness of statutory health insurance. In this vein, the Ministry conducted a major healthcare reform in 2007, something that improved the quality and efficiency of the healthcare system and strengthened patients’ interests, as well as contributing to the stabilisation of contribution rates.

Spahn has certainly gathered much experience in government during his time as the Parliamentary State Secretary to the Federal Minister of Finance between July 2015 and March 2018. Spahn was born in Ahaus in the Münsterland region of Germany and later, he commenced his professional career as a bank business management assistant and after that, he studied political science.”

When it comes to prevention, this is becoming ever-more important in Germany today. Indeed, the Ministry of Health conducts successful campaigns and initiatives in areas such as the action plan to implement the HIV/AIDS control strategy, ‘3,000 Steps’ (a campaign against a lack of exercise) and initiatives concerning women’s and children’s health, for example.

In addition, the reform of long-term care in 2008 resulted in tangible improvements for people in need of longterm care, as well as their relatives and nursing staff. For the very first time, patients had a legal claim to individual long-term care counselling (case management) and added to that, a series of measures helped to eliminate any quality shortcomings in nursing facilities.2

One important area of German health policy is vaccinations, which are among the most important and effective means of preventing disease in the medical world. One aspect of this is that there has been a marked increase in immunisation uptake in Germany, for example, paediatric immunisation rates are said to have been steady during the last decade. However, gaps still remain in childhood vaccinations against hepatitis B, pertussis and the second dose of measles vaccine, rubella and mumps. Added to this, adolescents and adults, too, have inadequate vaccination protection, for example, vaccination coverage rates for measles still fall short of those recommended by the World Health Organization.3

Another interesting area of the Ministry’s work concerns antibiotic resistance which was one of the topics on the agenda of the German G20 Presidency in 2017. One of the key objectives of that was the promotion of the ‘One Health’ approach and the strengthening of incentive mechanisms for the research and development of new antibiotics. At a joint event in Berlin during the September of that year, representatives of the public health institutes within the human and veterinary medicine sector of the G20 discussed ideas on the joint goal of tackling antibiotic resistance.

Finally, it’s worth highlighting that the Federal Ministry of Health’s website is a mine of very useful information, should you want to learn more about Germany’s health policy, whether that be practical advice to protect against diseases and infections or who does what in the German health system when it comes to doctors, hospitals, pharmacies, for example.4