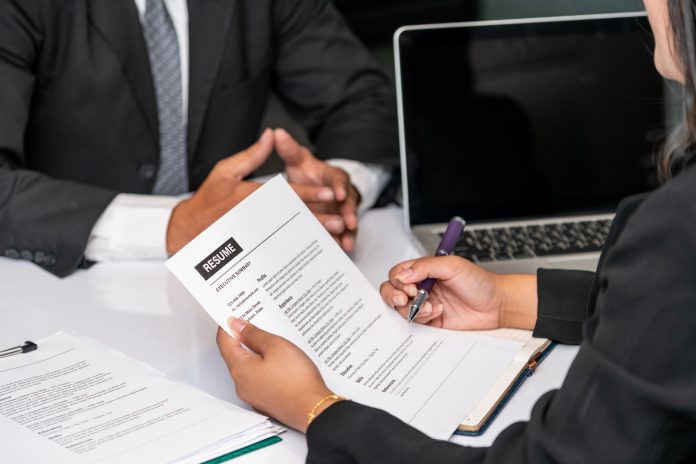 As the job market becomes more saturated during the pandemic, employers and recruiters will need to pay more attention to fraudulent applications. Here, René Seifert, co-head of TrueProfile.io, explores how blockchain technology can be deployed to combat CV fraud

The current job market is fiercer than ever due to the aftershocks of the COVID-19 pandemic and is only set to become more competitive. Sadly, many individuals have already lost their jobs and, although the government furlough scheme has been extended, the UK unemployment rate continues to surge[1].

A consequence of this will not only be a hike in more job seekers applying for a smaller number of roles, but also a heightened temptation amongst candidates to fraudulently tweak their experience, qualifications or degree to land a dream job and ensure their name is at the top of the pile.

While background screening and pre-employment verification has always been an integral part of the hiring process to weed out any fraudulent applications, the quality of professional verification checks have varied significantly in the past. Fortunately, just as CV fraud is likely to become more mainstream, new technologies are emerging – such as blockchain – which, if employed alongside more high-quality verification processes, can ensure a bulletproof hiring practice.

CV fraud is not new

It’s important to clarify from the off: the threat of CV fraud is not a new phenomenon born out of the pandemic, it has been an ongoing issue which has threatened businesses and sectors for years.

For example, in 2018, an investigation by the BBC’s File on Four programme found that more than 3,000 fake qualifications were sold to UK-based buyers, including physicians and nurses, by a single company in 2013 and 2014. In addition, research by YouGov published in 2017 revealed that one in ten British people have lied on their CVs with four in ten CVs containing embellished information about education and qualifications.

If a fraudulent job application is successful, it directly impacts those qualified applicants who missed out on the offer. Moreover, the costly effects CV fraud has on a business is far greater. High staff turnover, operational disruption and potentially damaged reputations are just some of the consequences businesses are left to deal with as a result of hiring a fraudulent candidate.

We are all familiar with screening and pre-employment verification stages during the hiring process, which are intended to address these concerns and avoid any damage to a business’ reputation. Outside of mitigating the risks associated with employing an unqualified candidate, certifying an applicant’s employment information can also help to reduce staff turnover, save costs, time and resources. For some industries – such as healthcare – verifying professional information is even a mandatory part of the recruitment process.

Yet, in the past, there has been a lack of consistency and quality in verification procedures, which means that businesses have often been left vulnerable and open to the effects of CV fraud.

In the UK alone, unemployment has recently risen to a three-year high[2], as well as redundancies being at their highest level since 2009. With these factors in mind, coupled with the news that the furlough scheme will come to an end in Spring 2021, businesses are now more likely to fall victim to CV fraud in comparison to previous years.

Why is this the case? Well, the job market will and already is becoming more saturated and competitive than ever before. According to reports, companies are receiving thousands of applications for jobs which would only have attracted a handful of applicants before the coronavirus pandemic[3]. In fact, there was even a case in which an entry-level position as a paralegal received 4,228 applications.

Consequently, as positions get fewer and far between and the competition rises, job seekers are likely to grow more inclined to exaggerate or even falsify their credentials in order to stand out amongst the crowd. This means that, without the right protections in place, such as a secure and trusted verification process, businesses are exposing themselves to falling foul to the dangers described above.

The role of technology

Thankfully, developments in technology over the past few years mean that business can now equip themselves with the right tools to strengthen their hiring processes. In particular, blockchain technology has emerged as a key part of the puzzle that can help businesses securely build a competent, verified team who are well equipped with the skills and experience to carry out their roles to the highest standard.

A blockchain can be best defined as a shared, distributed database which records transactions. Each transaction is added as a block and is stored, decentralised in the chain. Importantly, this means that no central party has control over its content, and nobody can tamper with the records because every member has to agree to its validity and can check the history of record changes.

When stored via blockchain, the validity of the verification can be checked in real time. For example, a verification issued by TrueProfile.io can be uploaded and authenticated against the blockchain and its validity is determined in a matter of seconds. By using quality verifications supported by the latest technology, companies are then able to build a competent, verified team with ease, saving time and resources while mitigating risk during these complex and testing times.

We understand that there could be some temptation to rush through the hiring process and circumvent steps to avoid sifting through an influx of applications. However, hiring businesses and recruiters must always consider the costly damage CV fraud could inflict upon them if due diligence is not taken.

Further, businesses today clearly have a wealth of technologies available to them to make internal processes more efficient, secure and trustworthy. One of these is blockchain which, if used in conjunction with quality verifications, can not only ensure a business shields itself from a likely rise in CV fraud, but also offers a level playing field for qualified candidates currently negotiating the job market.