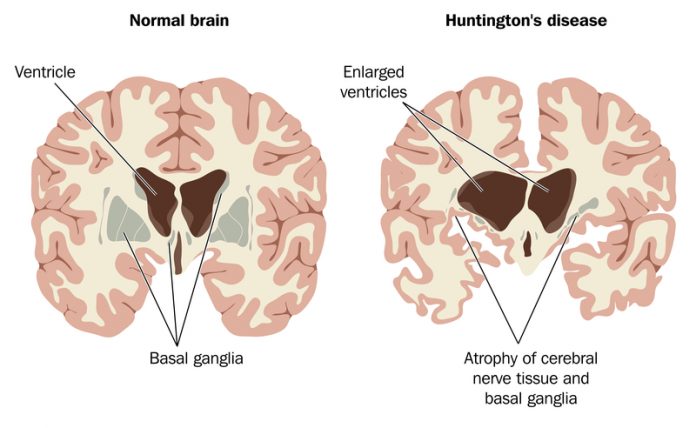 Mutation in the huntingtin (HTT) gene causes Huntington’s disease (HD), a dominant, heritable, neurodegenerative disease. The normal human HTT gene encodes a large protein whose function remains elusive. Extensive studies of the normal and mutant HTT protein have identified roles in the maintenance of proper cell structure and function, transport of key molecules within cells, regulation of gene expression, among others. HD is characterised by the appearance of aggregates visible in cells under a microscope, and degeneration of specific regions of the brain. Although the HTT protein is expressed throughout life, most patients develop symptoms in mid-life. Current evidence suggests that mutant HTT protein causes significant dysfunction of neurons as the disease progresses, ultimately resulting in cell death.

Mutations in a variety of genes cause neurological disorders. Of particular interest are genes that encode proteins that bind RNA. RNA molecules are so-called messengers of DNA, the blueprint of genetic information stored in each cell. RNA molecules are copies of DNA with instructions to make proteins specified by the DNA, a process termed gene expression. There are many proteins whose function is to bind RNA and regulate different steps in gene expression. These proteins bind RNA and control its stability and location within the cell. RNA binding proteins also regulate efficiency with which proteins are made by the ribosome, the machine that synthesises proteins. In response to stressful conditions, RNA binding proteins and RNA can form granules inside the cells. Under normal conditions, these types of granules also serve to transport RNA to distal sites where protein synthesis takes place locally in response to specific stimuli. RNA binding proteins whose mutations have been linked to several neurological disorders have been localised to granules found in neurons. It is tempting to speculate that mutant RNA binding proteins in these granules accumulate and become converted to irreversible toxic aggregates over time.

Protein aggregation is a hallmark of many neurodegenerative diseases. They are characterised by an irreversible accumulation of mutant proteins that are toxic and impair neuronal functions. Age-associated diseases such as Alzheimer’s disease involve protein misfolding and propagation of misfolded proteins. Mutations in proteins that bind RNA have been implicated in diseases such as amyotrophic lateral sclerosis, spinal muscular atrophy, and fragile X syndrome. Normally, granules formed inside cells are reversible protein-RNA assemblies comprised of RNA associated with the protein synthesis machinery and RNA binding proteins. Mutant RNA binding proteins, however, show altered biophysical properties. They have increased the propensity to interact with one another and affect the formation and function of the granules. At high concentrations, mutant RNA binding proteins may contribute to the formation of an irreversible toxic aggregate seed that triggers cell death.

Our lab reported a new role for the normal HTT protein in the transport of RNA and maintenance of RNA granules in neurons 1, 2. We found HTT protein to co-localise and co-traffic with RNA expressed in neurons. The involvement of HTT in the regulation of RNA could explain the specific pattern of cell loss and symptoms seen in HD. In the presence of mutant HTT, select groups of RNA may be more adversely affected over other RNA. An emerging body of evidence suggests regulated transport of select RNA and local synthesis of proteins from the RNA play a critical role in establishing connectivity between neurons. Our findings implicate normal HTT in these important dynamic neuronal processes. We hypothesise that HTT protein associates with a subset of RNA and regulate their fate in response to synaptic activity. It is possible that mutant HTT perturbs the process in some way, contributing to a loss of cellular homoeostasis and disease pathogenesis. Thus, like other RNA binding proteins linked to neurodegenerative diseases, HTT may play a role in RNA metabolism in neurons and share mechanisms and common pathways that lead to their death. Identification and characterisation of RNA bound and regulated by normal and mutant HTT will help to uncover underlying molecular mechanisms. Interestingly, our lab discovered that HTT protein binds its own RNA3, suggesting a mechanism of self-regulation that may go awry in cells harbouring a mutation in the HTT gene.

Since the gene that causes HD was discovered more than two decades ago, scientists around the world have invested monumental time and effort towards the development of therapies and cures for HD, which has been incredibly challenging. Therapeutic approaches that show most promise to date involve lowering the levels of mutant HTT RNA and protein in affected cells4, 5. This may be achieved by advanced technologies developed to silence genes. Most patients have one normal copy and one mutant copy of the HTT gene. Normal HTT is required for proper maintenance of neurons. Although selective silencing of the mutant HTT gene is desirable, this is difficult to achieve because normal and mutant genes are very similar in their DNA sequence. However, even partial silencing of mutant HTT (accompanied by partial silencing of normal HTT) seems to have beneficial effects in mouse models of HD6. Such therapeutic approaches are being pursued in hopes of delaying the onset and progression of the disease in patients.

Disruption of irreversible aggregates may be another way to slow or reverse disease progression. A new study reports the formation of RNA aggregates (termed RNA foci) in cells that accumulate RNA containing expanded repeat sequences7. The RNA was shown to aggregate when the repeat expansion reached a certain threshold. The resulting RNA foci changed properties from liquid to that resembling gelatine. The study suggests that gelatine-like assemblies are similar to aggregates associated with HD. Moreover, designing chemicals that disrupt the foci may be another avenue for effective therapy to treat this incurable disease.