Home Open Access News Research & Innovation News What do we know about cognitive development in infancy? 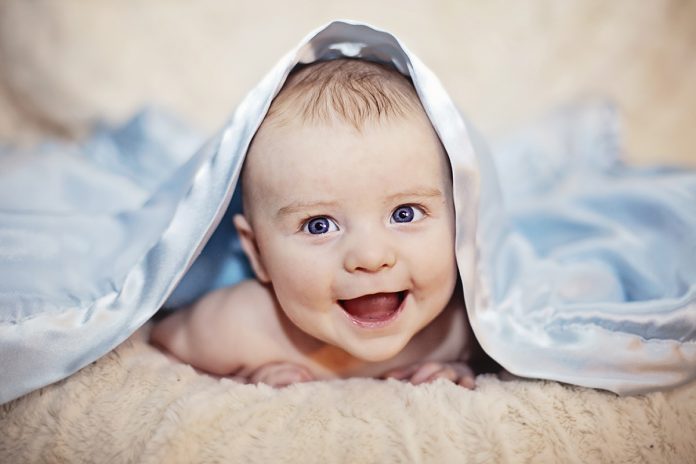 Research into cognitive development in infancy has thrived over recent years, but there’s still a lot we don’t know, as UCLA Professor Scott P Johnson writes

Our research focuses on the origins of knowledge in humans. The past several decades have witnessed a blossoming in research on perceptual and cognitive development in infancy, and a view has emerged that infants take in far more information, and are more aware of their surroundings, than we often give them credit for.

By the end of the first year after birth, infants seem to know many of the basics of the world around them: Objects tend to behave in certain ways (e.g., they persist when they are hidden), people interact with each other using language and gesture, and moving around and handling objects are good ways of obtaining more knowledge.

Despite these advances, fundamental questions remain concerning how this state of knowledge comes to be. The UCLA Baby Lab explores these questions with preferential looking and eye tracking paradigms, as well as connectionist modelling of developmental phenomena. Because the focus is on origins, we are less interested in participating in traditional “nature vs. nurture” debates (though we do it anyway), than in understanding and elucidating precise developmental mechanisms: Endogenous prenatal or postnatal organisation; the role of experience in shaping responses to recurring patterns; contributions of perceptual (i.e., low-level) skills to cognitive (i.e., high-level) functions; and the context of the family and wider social environment. The question of origins of knowledge lies at the intersection of developmental psychology, social psychology, vision science, cognitive science, and developmental neurobiology.

Many “smart” mechanisms emerge from simple mechanisms, given the right environment. Infants are born with rudimentary perceptual and learning skills and a handful of reflexes, but there is little evidence that “knowledge” is available to neonates, beyond the ability to acquire information quickly and retain it over short intervals.

Within several months, however, the situation is radically different. The goal of our research is to explain developmental phenomena, first by describe age-related changes in visual perception and early learning abilities, and then by revealing the mechanisms responsible for these changes. We distill a question to its fundamental essence, see how and when infants respond to the simplest possible version of a cognitive challenge, and from there, develop new theory.

We devote a lot of time and energy to new methodological advances, such as computer-controlled experiments and eye movement recordings in infants. Computer-controlled experiments give us precise management of stimulus generation and presentation. Recording eye movements is technically challenging but the resulting data are incomparable in their precision, and, I believe, bring us as closely as possible to what infants are thinking. We also use imaging techniques such as fMRI and EEG (functional magnetic resonance imaging and electroencephalography) in studies of cortical correlates of perception and learning, and computational models of perception.

The means by which humans acquire and represent knowledge of other people is fundamental to social and cognitive science, and a central question asked by developmental psychologists concerns how infants learn so much in so little time in the absence of explicit instruction. The rapidity and apparent ease with which infants and young children understand and produce speech, recognise faces, and interpret others’ mental states, for example, have led to suggestions that innate cognitive mechanisms provide some knowledge in each of these social domains.

Yet such views may risk neglecting the potential roles of perception, attention, learning, and experience in guiding social development. Recent theoretical proposals that account for such skills, such as social-orienting models, hold tremendous promise for elucidating the nature and origins of human social cognition. Central to these models is the possibility that social attention in infancy serves to identify targets that afford social relationships which in turn promote normative brain and behavioural development. This cycle acts like a positive feedback loop, affecting subsequent social development. Social attention, therefore, is the initial “gateway” through which the social environment is engaged.

Social attention develops in context, and a central research question is whether differences in social context – for example, language background or racial composition of the family – yield specific “downstream” consequences for categorisation, just as social categories, once formed, have consequences for impressions, attitudes, stereotypes, and prejudice. A series of studies currently underway examines infants’ ability to discriminate or categorise various properties such as gender and emotion from face and body stimuli. We recently discovered visual preferences for minority faces (African-American and Hispanic) vs. White faces in Hispanic and White 11-month-old infants, a finding that may bear important implications for the origins of social cognition and social categories.

“Statistical learning” refers to the ability to detect associations among items such as visual stimuli or words, eventually leading to grouping and detection of coherence among items and the acquisition of sophisticated knowledge structures, such as words and sentences. That is, statistical computation mechanisms may contribute to early language acquisition by segmenting the speech stream into units.

However, more recently, research in the UCLA Baby Lab has revealed striking limits in infants’ visual statistical learning, and revealed some of the fundamental perceptual mechanisms underlying learning performance. Current evidence suggests that statistical learning actually consists of the gradual accrual of “chunks” of structure, not specific computations. Alternatively, statistical computations might contribute the first steps in pattern learning, to be superseded by a chunking mechanism that does not retain statistical information.

Please note: this is commercial profile