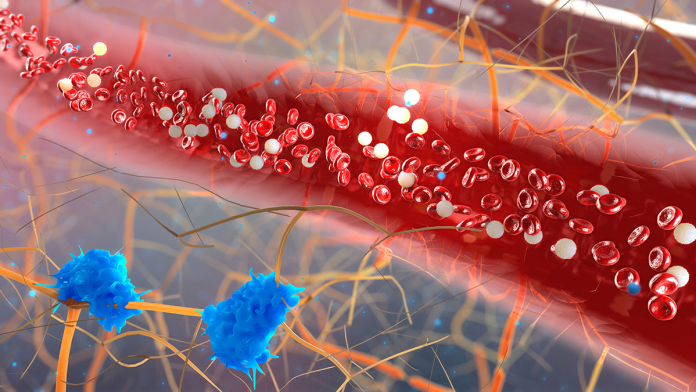 The cerebral cortex is essential for the integration and processing of information that is required for most behaviours. The exquisitely precise laminar arrangement of neurons, axon collaterals and dendritic processes arise during embryonic development when neurons migrate successively from proliferative ventricular zones to coalesce into specific cortical layers. Abnormalities in neurons and defects in cortical inhibition have long been implicated in the etiology of schizophrenia, autism spectrum disorders (ASD), anxiety and depression.

Brain development, however, like a gem that is cut with many facets that sparkle, is not limited to neuronal changes but is also supported by concomitant development of its vasculature. Correct functioning of the cerebral cortex necessitates the concerted assembly of both vascular and neuronal networks. Here, I will discuss the progressive change in thought with respect to brain blood vessels and its direct contribution to mental health illness from the earliest developmental time points.

Until a decade ago, blood vessels in the embryonic forebrain were believed to be a homogenous population of vessels, responding passively to the metabolic demands of growing neuronal populations. Our work depicted the diversity in embryonic forebrain vascular networks, by differentiating them as pial versus periventricular, based on anatomy, origin, growth patterns and developmental mechanisms1.

The tapering vessels joining the periventricular and pial vessels may represent the earliest arterial-venous communication. The periventricular vascular network develops in advance of and is independent of neuronal development by embryonic day 11 to act as a substrate and provide critical guidance cues to instruct key events that follow in the embryonic telencephalon, for instance, neurogenesis (birth of new neurons), radial migration of projection neuron precursors and tangential migration of GABAergic interneurons2,3.

Pial endothelial cells, on the other hand, showed enrichment in inflammation and pathological process categories. When genes expressed in periventricular endothelial cells were classified according to disease categories, an enrichment was observed in psychiatric disease categories3. Our studies, therefore, implicate a new cellular substrate – periventricular endothelial cells as being contributory to a wide swath of neuropsychiatric diseases with schizophrenia, epilepsy, bipolar, mood, depressive disorders and autism topping the list, shedding light on a new problem.

Certainly, the problem is very significant because it means that we have focused on psychiatric illnesses from a neuronal perspective extensively when intrinsic defects within blood vessels may be the actual trigger. These results also highlighted the great need to validate and understand the functional significance of novel genes expressed in periventricular endothelial cells/blood vessels and its specific contribution to psychiatric disease symptoms.

So, we went on to investigate why genes traditionally believed to be confined to GABAergic interneurons were enriched in periventricular endothelial cells – among them were Gad1 and Gad2 – these encode GAD proteins that synthesise GABA, GABAA receptor β3 subunit (Gabrb3) and vesicular GABA transporter (Vgat). We designed strategies to specifically render endothelial GABAA receptors dysfunctional or turn off GABA release from endothelial cells4.

This led to the discovery of the novel vascular GABA signaling pathway operating via forebrain endothelial cells that has an intricate and powerful control of prenatal brain development events – angiogenesis, neurogenesis and neuronal migration. Changes in this pathway left lasting signatures on cortical circuitry and blood flow in the postnatal brain with consequences for behaviour4. Dysfunction of endo­thelial GABAA receptors was sufficient to cause behavioural abnormalities similar to psychiatric disease that was characterised by one or more of these core symptoms – impaired social recognition, reduced social interactions, communication deficits, increased anxiety or depression.

On the other hand, complete loss of endothelial GABA release resulted in significant abnormalities in developmental milestones and led to a model reminiscent of childhood epilepsy or autism spectrum disorder. Alterations in postnatal behaviour were characterised by periods of quiescence, interrupted by tremors and a reduction in voluntary movement and the mice failed to survive beyond two months of age.

For the very first time, our studies describe how intrinsic defects within telencephalic vasculature/endothelial cells from the earliest developmental time points can independently mould neuronal signaling pathways with far-reaching consequences for brain development and behaviour4. It also highlights how variations in vascular GABA levels can cause diversity in psychiatric symptoms4.

We expect our work to bridge a gap between vascular biology and psychiatry. Abnormal vascular pathologies and disturbances of cerebral blood flow have repeatedly been observed in patients with schizophrenia, autism, anxiety and depression using old and new technologies. However, these disturbances were usually linked to inflammation or changes in neural plasticity. Our project uncovers a direct cause of change in blood flow in psychiatric disorders that originate from intrinsic defects in blood vessels from the earliest developmental points.

There is a great need to better understand the spatiotemporal regulation of endothelial cell gene expression and function in brain vascular networks at both developmental and adult stages in normal and disease conditions. The neuro-vascular communication initiated in the prenatal period is likely to acquire greater complexity after birth. Blood flow may provide spatial and temporal information, modulating excitation and inhibition in cortical circuits, thereby affecting representation. Therefore, if there is an intrinsic defect within brain endothelial cells, it has to be identified and corrected for the restoration of brain health.

We hope to apply this new scientific knowledge not only to gain a deeper fundamental understanding of novel origins of psychiatric disease but also to generate new and effective treatments. In ongoing projects, we are tapping into the potential of embryonic periventricular endothelial cells/angiogenesis, in multiple ways to prevent the origin of diverse psychiatric symptoms by rescuing vascular defects in the prenatal brain or by developing vascular therapies for repair and regeneration in the postnatal and adult brain. We envision a future where the ‘healing touch’ of angiogenesis therapy will bring relief to patients suffering from mental health disorders. Determination of brain blood vessel health should, therefore, become a part of our routine health visits and check-ups.