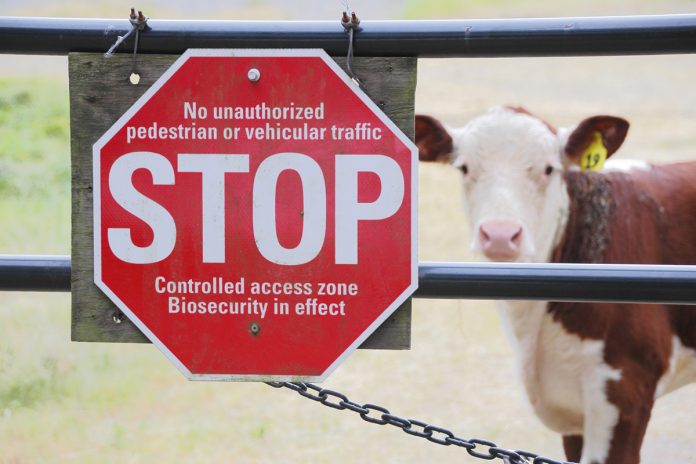 Quite naturally, viruses which infect humans – such as HIV and Ebola – generate huge public concern and necessitate huge resource for treatment and control. Such viruses are originally animal viruses which have been transmitted to humans (‘zoonosis’). Alongside zoonotic diseases, however, human health is also affected by viruses which infect only animals. Losses in animal productivity affect human nutrition: poor diet during pregnancy and childhood affects health prospects throughout life. The foot-and-mouth disease virus (FMDV) infects cloven-hoofed domesticated animals (cows, pigs, sheep goats etc.), but also many types of wild animals (confusingly, there is also a human disease – Hand, Foot-and-Mouth Disease – is caused by a different virus). In 2001 the UK suffered a huge outbreak of FMDV which cost the UK economy billions of pounds, affecting not only the agricultural but the tourism sectors. Such outbreaks within developed economies do not materially affect overall food supply, but this is may not be the case for many low-to-middle income countries (LMICs) – where FMDV may be endemic. Furthermore, a much higher proportion of the population within LMICs are directly involved in agriculture than in developed countries. The increasing affluence of highly populated countries such as India and China raises demand for meat products, having a progressive effect on the World prices of both meat and animal feedstocks: UK food security is intimately linked to global markets.

Aside from subsistence farming, agriculture is a business and disease control via vaccines or drugs must conform to the economic factors in play. The extraordinary cost of drug development ($billions) effectively precludes them as a way forward – most especially for farmers in LMICs, but much research is being conducted to develop new animal vaccines. Three main types of vaccine are used. ‘Killed’ vaccines are made by chemical ‘inactivation’ of the virulent virus which must be grown in bulk – with the attendant costs of highly bio secure production facilities and the hazard of virus escape. The inactivated, killed, a vaccine is inert (does not grow within the recipient) and must be administered by injection to elicit the protective immune response. ‘Sub-unit’ vaccines comprise purified, immunogenic, virus proteins. They do not contain any virus and are, therefore, biosecure. The production of these proteins is, however, expensive and, like killed vaccines, they are inert and administration requires injection. ‘Attenuated’ virus vaccines are made by genetically altering the virus genome such that it can still grow with the target host species to elicit a protective immune response, but the attenuated virus can no longer cause disease. To date, two viruses have been completely eradicated from nature: the human virus smallpox and the animal virus rinderpest – with poliovirus eradication close by. In each of these cases live, attenuated, virus vaccines were used.

Historically, viruses were attenuated by serial rounds of growth in mice or tissue-cultured cells. During this process mutations accumulated in the genome (by chance) such that some of the individual viruses became attenuated in the natural host. A major problem with attenuated vaccines is, however, that when the attenuated vaccine virus strain is grown in bulk during the vaccine production process, there can be a spontaneous mutation of the virus genome back to a virulent form (‘back mutation’ or ‘reversion’). For example, the attenuated poliovirus vaccine strains in use today were developed in the 1950s – long before the genome sequences were known, or what the attenuating mutations were present.

There has been a complete transformation in the techniques available in molecular biology during the past two decades: it is now possible to design and synthetically create such virus genomes at will. New techniques are available to attenuate viruses by genome modifications such that they are genetically ‘stable’: no reversion to virulence. The challenge facing molecular virologists is that unlike poliovirus (with a single, human, host), FMDV is able to infect a wide range of species. ‘Designing’ or engineering the right level of attenuation suitable for eliciting protection within multiple species (pigs/cows/sheep etc.) may prove to be problematic. The advantages of producing such a genetically stable live, attenuated, FMDV vaccine in comparison to killed vaccines are, however, considerable: increased biosecurity during production, cheaper vaccines, superior immune response, potential ‘cross-vaccination’ between domestic animals by transmission of the attenuated virus – potentially vaccine transmission into wild-animal reservoirs of disease.

Adoption of such vaccinations will, however, require changes in policy: routine, rather than ‘emergency’ vaccination and changes to the restrictions upon trade in animals with anti-FMDV antibodies. What is clear is that any such changes should be driven only by firm data obtained by experiments initially using animals housed under containment conditions then, if successful, controlled field trials. What I think is clear is that the policy of disease control by mass-slaughter of infected and susceptible animals is not sustainable and is certainly unacceptable for sociological and economic reasons in many areas of the world.