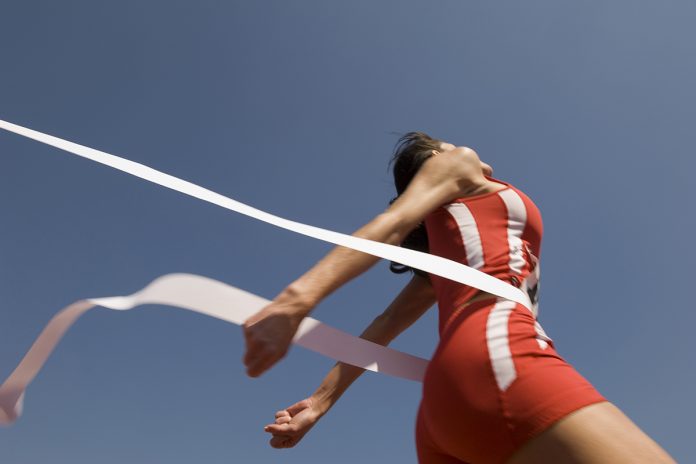 Athletes, coaches, and sport physiologists know that the menstrual cycle can impact athletic performance, positively and negatively, despite limited research. In the mid-80s, female athletes were overlooked for research studies because of the challenges and complexity of measuring hormones. I wanted to investigate biomarkers associated with overtraining in rowers, specifically females. An important research component would be understanding how hormonal responses impact the metabolic stress of exercise. My graduate supervisor, however, said it would be too difficult and costly to measure the many factors affecting menstrual cycle characteristics.

A quick review highlights that the idealised model of cycle length is 28 days. In the follicular phase, days 1-13, the pituitary gland stimulates egg development through oestrogen production. After the egg is released the ovary produces the hormone progesterone to ready the uterine lining for implantation. Days 13-15 are the ovulatory phase. The luteal phase, days 16-28, is dominated by progesterone and follows post ovulation. Ovulatory disturbances include cycles where no egg is released, (anovulation) or shorter or longer follicular and luteal phases. Throughout the cycle, the luteinising hormone (LH) is secreted and controlled by the hypothalamic-pituitary-ovarian (HPO) axis. Energy balance factors associated with caloric intake, low body fat and weight restriction, influence the ability of the HPO-axis to withstand the stress brought on by exercise (Loucks & Horvath, 1985). Subsequently, a negative energy balance results in ovulatory disturbances including amenorrhea (periods are absent), which is often associated with the Female Athlete Triad.

The triad is a combination of energy deficiency, ovulatory disturbances, and bone loss (osteoporosis) or bone weakening (osteopenia). Triad research in the early 1990s was focused on athletes participating in aesthetic (gymnastics, figure skating, and ballet) and endurance sports (cross country skiing and running). At the time, I was the sport physiologist for the national ice hockey team. We investigated energy expenditure and the metabolic-hormonal profiles of elite ice hockey players (HG) and non-athlete but active university students (CG) (MacDonald & Doyle-Baker, 2000, 2001). We measured luteal phase length using basal body temperature (BBT). This method coupled with keeping a menstrual cycle diary was too time intensive for the HG, with only a 28% completion rate versus 70% with the CG. Our data suggested that although HG and CG were in a chronic state of negative energy balance, they did not exhibit a loss of body weight or percent body fat, commonly associated with disordered eating practices and the triad. But they did have varying cycle lengths.

The mean cycle length for both groups was within the defined range of a typical length, 21-36 days (Munster et al., 1992). The maximum cycle length of both groups, however was suggestive of the occurrence of oligomenorrhea, i.e. greater than 36 days. Similarly, the minimum cycle length was indicative of polymenorrhea, i.e. less than 21 days, but was only observed in the HG. Both groups were classified as having short luteal phases (less than 10 days), with the mean luteal phase length for the CG slightly less than that of the HG. Anovulation occurred in 50% of HG and 43% of CG cycles. Overall, the HG group exhibited slightly longer cycle lengths when compared with the CG. These results loosely supported Loucks and Thuma’s seminal research to show that low energy availability, not necessarily the stress of exercise or athletic involvement, was the factor responsible for altering the LH pulsatility in exercising women (2003).

We continued to ponder the idea of energy availability in the menstrual cycle from a substrate utilisation and fuel perspective for a decade before embarking on more research. Oestrogen is well known to reduce carbohydrate oxidation and increase free fatty acid availability, and progesterone promotes protein catabolism. Therefore, hormone fluctuations high or low during the menstrual cycle may influence: 1) endurance and high intensity exercise performance and 2) the trainability of muscle strength and increase in muscle mass. Hormones also play a role in fluid regulation measured by blood plasma volume (haematocrit). When hormones are high, oestrogen and progesterone may contribute to a decreasing plasma volume resulting in blood viscosity changes (haemoglobin). Based on the above, we hypothesised that in a 4-week training study aerobic fat oxidation would be improved during the luteal phase when compared to the follicular phase (Minichiello et al., 2016).

Recreationally trained eumenorrheic (menstruating) cyclists (n=8, 46.0 ±5.1 years) were recruited in Calgary Alberta. Weekly performance testing was accompanied by ‘day of cycle’, urine colour selection, body composition, haematocrit and haemoglobin measures. To mimic training intensities two workloads below ventilatory (anaerobic) threshold were used maximizing fat burning (approximately 60% VO2max) and two mean max power (MMP) tests (6 and 60 second) were used for power output measures. Fat oxidation mean results were significantly different (p<0.05) over the four weeks specifically between week 1 and 4 and week 3 and 4. The six second MMP test showed no significant difference with means of 747.25 watts, 718.00 watts, 751.88 watts, and 715.63 watts for weeks one through 4 respectively. Although inconsistencies occurred throughout the 4-weeks, these findings suggest a trend towards improved fat burning during the luteal versus the follicular phase. More training studies with larger numbers are needed to fully understand the effect of menstruation on sport performance determinants such as fat oxidation and power output.

The combined research and anecdotal evidence I have heard as a sport physiologist identifies that the menstrual cycle effect on sport performance is not science fiction. After three decades of menstrual cycle research there is no clear consensus but agreement exists that substrate availability and fluctuating hormone levels play an important role particularly in endurance performance (Abdollahpor et al., 2013; Oosthuyse and Bosch, 2010). There is complexity in measurement, which is influenced by individual variability, a fact identified in the 1980s by my supervisor. Verification difficulties in hormones and cycle length have been lessened with cost effective mobile device apps that chart BBT and urine based ovulation tests. Despite these advances, the under-representation of females in sport research related to the perceived barrier in menstruation unfortunately still exists (Costello et al. 2014).