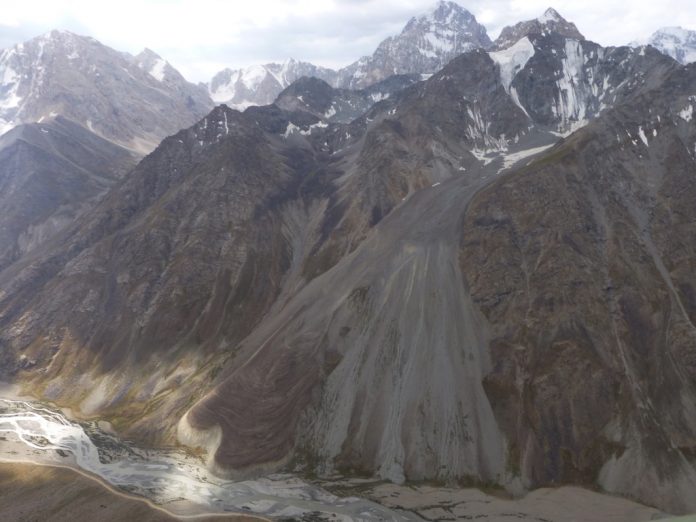 Martin Hoelzle, Martin Scherler and Christian Hauck from the University of Fribourg explore the possibility of melting ice-rich permafrost as a water resource

Glaciers are currently melting at increased rates on a worldwide scale. At specific places, especially in dry regions such as Central Asia, their water constitutes an important freshwater resource for irrigation in agriculture or for drinking water. With the projected reduction of glacier volume during the 21st century, the glacial water contribution will considerably decline. This will change seasonal runoff patterns drastically and water availability during the dry summer months will be strongly reduced.

Many studies already confirmed this effect, especially for small local catchments, where glaciers have already completely melted and therefore, runoff is reduced to an extreme extent. Therefore, knowledge about future water availability in different catchments and on different scales will be of utmost importance for water engineers and water managers.

At present, still little is known about the ice melt contribution to total runoff from regions with extensive permafrost occurrence. As permafrost, unlike glaciers, is a phenomenon that is not directly accessible by remote sensing methods, it is difficult to estimate ground ice content over large areas. The knowledge about mountain permafrost has increased enormously during the last decades and it has been revealed that most of the ground ice within alpine permafrost is stored under thick accumulations of coarse blocky material.

The origin of the ice within these debris materials are manifold and can be classified as congelation ice and sedimentary ice based on snow deposition, the forming snow patches, glacierets or even glaciers. If the ground is supersaturated, meaning that the ice is filling all pore spaces and is connected over larger distances within the ground, it starts to creep and large morphologically well-distinguished features are starting to form the landscape. These features are called rock glaciers.

Today, it is thought that a large part of the ice in mountain permafrost areas is stored within these creeping permafrost features. The ice volume content of rock glaciers is estimated at 10 to over 90 %. However, an exact determination of the ice content can only be achieved by detailed direct or half direct investigations through drilling or the application of geophysical sounding methods. Through repeated geophysical measurements even a first estimate of the temporal change in ice content is possible.

One of the main open questions is how the ice content in such frozen grounds can be related to local runoff generation. Such studies in small catchments containing permafrost are very sparse and an assessment at larger scales has not yet been performed in detail. The available studies show that runoff generation in permafrost areas is a quite complicated subject because ground ice acts as an impermeable layer for water and is often distributed in an irregular way.

Therefore, the water percolation, the routing and the corresponding runoff coming from such areas, often show temporally and spatially inhomogeneous distributions. Some studies based on tracer experiments revealed a runoff behaviour which is normally driven by fast runoff based on strong precipitation and/or snowmelt events.

The effective fraction of the runoff contribution based only on the melt of the ground ice is unknown. Only a few studies provide values of the annual mass balance of rock glaciers. These show the amount of ice melt being in the order of a few centimetres water equivalent per m2 per year.

To get more reliable answers to these questions, the most promising option is the application of numerical models able to calculate energy and mass fluxes within the different surface and subsurface materials in a fully coupled way. Additionally, runoff measurements and geophysical soundings would allow for the determination of an optimal set of parameters for the calibration of such models.

One of the most extensive investigation campaigns worldwide has been performed on rock glacier Murtèl-Corvatsch in the Upper Engadin, Eastern Swiss Alps. On this rock glacier, the longest borehole temperature series down to more than 60m depth exists (since 1987) and meteorological measurements are available since 1997.

In addition, several geophysical surveys have been undertaken since the end of the 1980s. These measurements reveal that the ice content of this rock glacier is as high as 90%, showing the particularly high amount of ice stored in this permafrost phenomenon. First calculations of runoff estimates, for such a rock glacier catchment in a dry mountainous region, are maybe as high as 4% to 9% of the total runoff.

In addition to the total annual runoff amount, it should be noted that these water reservoirs will thaw at slower rates than glaciers and will thus provide meltwater during longer time periods in future. Keeping this in mind, it becomes evident that such sites must be investigated in more detail in the future – also to improve our understanding of the exact processes involved in the runoff generation from permafrost catchments.

Permafrost is an alithospheric material which shows continuously temperatures below the freezing point, for at least two consecutive years. In general, ground in permafrost environments can contain remarkably high ice content.

Rock glaciers are a form of mountain permafrost, showing distinct patterns of mass movement. They consist of rocks from talus slopes or from moraines containing large amounts of interstitial ice and/or solid ice cores. They are flowing downwards driven by the force of gravity and show typical surface topographies due to compressive flow. At and within the surficial active layer consisting of debris or large blocks, they exhibit various forms of heat exchange with the atmosphere. These heat exchange processes are important for the continuous existence of rock glaciers, as they modify the energy balance compared to bare rock faces or plain slopes.